Aristotle the most famous of all the Greek philosophers, was a disciple of Plato, after whose death he retired from Athens, and later undertook the education of Alexander, later known as Alexander the Great. Subsequently at Athens he established the Lyceum and founded the Peripatetic school of philosophy, which has had great influence on the expansion of thought. 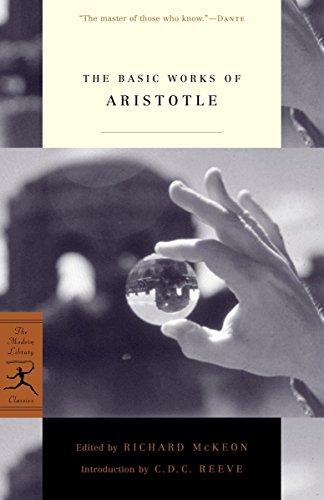 Anybody can become angry - that is easy, but to be angry with the right person and to the right degree and at the right time and for the right purpose, and in the right way - that is not within everybody's power and is not easy.

Aristotle was born in 384 B.C., at Stagira, a Macedonian city about 200 miles north of Athens. His father was a physician and served as court doctor to King Philip of Macedonia.

As a youth Aristotle had both opportunity and encouragement to develop a scientific turn of mind. At eighteen he went to Athens to become a pupil in Plato's school. Plato exerted a profound influence on his pupil - an influence which is reflected in the happy balance of Aristotle's interests. His love of science, inspired by his father, was tempered under Plato's tutelage by an equal appreciation of philosophy, politics and metaphysics.

After leaving Plato's school Aristotle founded an academy of oratory, numbering among his pupils a wealthy young man, Hermais, who later would rule the city-state of Atarneus. After achieving this position, Hermais rewarded his former teacher by inviting Aristotle to the court and arranging a marriage between the philosopher and his sister.

About a year later Aristotle was called to Pella to the court of Phillip, King of Macedonia, to undertake the education of young Alexander, who later would become Alexander the Great.

When Alexander succeeded to Philip's throne in 336 BC he laid aside his books to take up the sword, Aristotle returned to Athens to found his own philosophical school which he called the Lyceum, helped by money sent to him by Alexander.

Here he walked about as he taught, hence the name Peripatetic by which his school and sect are known. For a dozens years he dominated the field of learning while Alexander conquered empires. When Alexander died and an anti-Macedonia party came into power in Athens, Aristotle fled to Chalcis, where he died in 322 B.C. - some say by drinking hemlock.

With Aristotle's death Greece lost her greatest philosopher, for his contributions were many. His works include treatises in the physical and biological sciences, psychology, politics, aesthetics, metaphysics and logic. He is considered to be the father of modern science. Many historians rate him as the greatest intellect that ever lived whose system of logical analysis formed one of the main bases of the philosophic thought of Western civilization. Aristotle's early medical training, given to him by his father, result in a biological emphasis in his philosophy. The 'ladder of nature', in which all natural objects had their place, was central to his thinking.

Aristotle has often been called the worlds greatest thinker. He tried to span the scope of knowledge as it existed in his time. He was a logician, aesthetician, biologist, ethical theorist and the administrator of an educational institution. He wrote dozens of works not only in philosophy but also in physics, biology, meteorology, psychology and politics. He also wrote a treatise in which he systematically dealt with the various mental processes of sensation, perception and memory. Will Durant in his 'Story of Philosophy' calls Aristotle "The Encyclopaedia Britannica of ancient Greece". So powerful was the domination of his intellect that he is generally acknowledged to be the father of modern science.

Plato founded the first university, the Academy, whose most famous student was Aristotle. Though much influenced by Plato's teachings Aristotle was temperamentally so different that little of his work resembles that of his master. While Plato's later thinking, in line with his passion for the beauty of mathematics, was based on mysticism, Aristotle's favourite branch of science was biology. HE was a down-to-earth investigator, fascinated by the immense variety of concrete facts.

Plato favored absolutes, but Artistotle favored compromise. He argued that virtue is a middle way between excess and default. through sharing Plato's republicanism and his idea of the philosopher-king, Aristotle rejected the idea of the ideal state. In his Politics, he discusses six general types of constitution, and then compares them with all those existing in the city-states of the Greece of his time. Like Plato, Aristotle rejected democracy, arguing that a monarchical aristocracy was the best compromise form of government.

Aristotle's passion for classification, no doubt the fruit of his love for biology, led him to invent many new terms and fix clear definitions for others. He devised the Ladder Of Nature, classifying various forms of life according to their relative complexity and also defined the main branches of knowledge. By contrasting the two states of potentiality and actuality he explained Zeno's Paradox and accounted for the phenomenon of change. Things become what they are because of their potentialities, he argued. An acorn is potentially an oak tree, and carries within itself the 'form' of an oak. Therefore we should inquire to ends - the goal towards which things tend - rather than origins. This principle is called Teleology (from the Greek telos meaning 'goal'). Any objects consists of basic shapeless matter, on which a form is superimposed to make it what it is. These 'forms' are related to the forms of Plato, but Aristotle sees them as existing solidly in the objects we perceive, rather than in some imaginary 'perfect' world.

Aristotle formulated what was to become one of the most famous arguments for the existence of God. This was the 'first cause' argument which followed from his view that all nature tended towards a final cause. Plato had put a single god into the center of ethics; now Aristotle put him into physics and metaphysics. Combined with the rise of Christianity, this guaranteed that theology would be the first philosophy for centuries to come.