Etain- the most beautiful woman in Ireland

The most beautiful woman in Ireland was called Etain and she became the second wife of the God Midhir. His first wife did not wish to share and used magic to turn Etain into various substances, starting with water, then a worm and then into a beautiful musical butterfly who made delightful music and had a gorgeous scent which diffused through the air.

Midhur's first wife, Fuamnach became angry when she realised that her magic had failed as the God was so happy with the new form of his second wife. Fuamnach tried again, this time magicking up a fierce wind which drove Etain to a rocky shore where she became beached.

The search for Etain

Midhir was bereft at the disappearance of his beautiful butterfly wife and sent his foster son Oengus to find her. Oengus searched all over the kingdom and after seven long years he found her still beached on the rocks. Oengus was possessed of magical abilities and managed to turn Etain back into a woman but it only at night, during the day she reverted to being a butterfly. Gazing into her beautiful face, Oengus fell in love with Etain and they lived together as man and wife until the evil first wife, Fuamnach discovered them. As it was day time Etain was in the form of a butterfly and Fuamnach again magicked up a strong wind and blew her into a cup of mead. An old lady who could not see well, took a deep gulp of the mead and swallowed the struggling butterfly.

Somehow after she was swallowed Etain swam into the womb of the woman and became a chrysalis. The old woman was reborn many times and eventually Etain was born again 1012 years after her first incarnation. She was still named Etain but was now the daughter of King Etar of Ulster. As soon as Etain reached maturity she married Eochnaid Airem who was the King of Ireland. The God Midhir, who was immortal, found out that Etain as still alive and went to Ireland to take her back. As she was pregnant, Etain would not go back without her husbands consent so the God Midhir challenged him to a chess tournament which he won by using his non human powers. When Midhir went to claim his bride, the doors of Eochaid's palace were tightly shut and barred but he didn't need to use doors, he could walk through walls and so he materialised in the Kings's hall and seized Etain taking her out through a smoke hole in the roof, disguised as a pair of swans.

Eochaid followed Midhir and Etain to his home and laid siege to it for nine years, Midhir eventually came out and offered to return Etain to her husband. However the God tricked Eochaid and sent out fifty identical women, telling him to choose one of the women to take home. Eochaid checked each woman and eventually chose the lady whom he thought was the original, his wife. Some years later Midhir told Eochaid that he had in fact chosen his own daughter by whom he had already had a son!

Some of these myths may be beyond our understanding but in a society where magic was believed where winds howled and where there were other supernatural explanations for every day occurrences then this was believable. 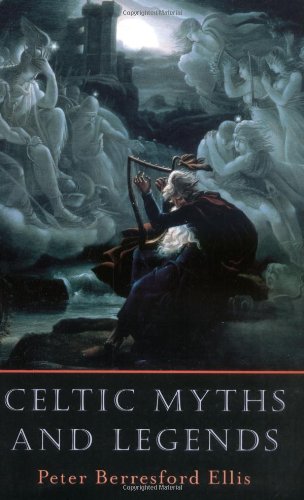 Celtic Myths and Legends
A colection of stories from all the celt regions, irish, scots, manx, cornish, breton and welsh- meet the heroes of the celtic world
Buy Now