There are literally hundreds of books out there on Celtic myths, Irish and Scottish legends and lore. I don't claim this list is comprehensive, but here are reviews of the best Celtic mythology books on my shelf. Some I use for research, others more for reading pleasure, but I recommend all of them.

A note when selecting and browsing books of Celtic mythology: While some are scholarly, the vast majority are beautifully-illustrated anthologies written mostly for enjoyment and discovery, just as myths were originally intended. Yet other books on Celtic mythology are written from the perspective of the Neopagan revival, and those are subject to a certain amount of reconstruction and interpretation by their authors. Any of these books may be more or less well-researched.

Review: Only 140 folio-sized pages, this is one of the best books on Celtic Mythology. The scholarship is good, the photographs of Celtic artifacts are plentiful, and Mac Cana manages to strike a good balance between giving us historical and cultural context, and telling the great stories.

What I particularly like about this book is its organization: there are separate chapters for Gaul (the Continental Celtic region), Britain and Ireland, and Mac Cana carefully untangles for us the overlapping pantheons and hero-traditions of different areas. There is also excellent discussion of Romanized Celts.

This book is out of print, but thanks to third party sellers on Amazon, you can often find it available. I strongly recommend it.

Review: This is a good introduction to Celtic mythology. In 153 pages, R. J. Stewart delivers an abbreviated but lively account of major gods and goddesses, a few heroes, and some major sources (The Book of Invasions).

The writing is accessible to the general public, yet it includes numerous quotes from sources in translation.

The one quibble you may have with this book is that it's a survey, not an encyclopedia of information on Celtic myth.

Review: For research, students, and enthusiasts, here is a comprehensive mini-encyclopedia of Celtic gods, goddesses, mythological figures, animals and symbols.

A twenty page introduction on Celtic history, culture, and mythology grounds the reader, but this is definitely a sourcebook rather than casual reading (it could be used as a textbook). A dense ten-page bilbiography would assist anyone doing research in Celtic studies, although of course it's not up to the minute. Individual dictionary entries include references to these sources, so you know where to go for further reading.

Entries are enhanced with hundreds of black and white photos and sketches of Celtic (and a lot of Romano-Celtic) artwork: statuettes, metalwork, grave goods and more.

The Book of Conquests

Review: If you're looking for scholarly discussion or goddess religion, this oversized, lavishly-illustrated book is not for you, although the Morrigan and the Babd both play important roles in the course of the battles. If you're looking for an epic modern retelling of the twelfth-century Leabhar Gabhala Eireann (the Book of Invasions), with incredible Celtic Revivalist artwork on every page and ferocious heroes, you have to see this book.

The book was released in 1978, when color printing like this first became feasible. The style is gripping, bardic, told in first person by the Taliesin-like bard, Tuan. Here are Nuada the Silver-handed and King Eochai of the Fir Bolg, the Morrigan (whose appearance makes the book PG-13 in one spot) and Crom-Cruach, druids and warriors and witches. Like The Iliad, it's bloodthirsty in parts, but it brings to life mythology without cheapening or distorting it.

Review: This book must be taken with large grains of salt, as it is part of the Victorian Irish Literary revival, when antiquarians and armchair enthusiasts were resurrecting Irish pride and romanticizing old myths and legends.

Nevertheless, Yeats did for Irish myths and legends what the Brothers Grimm did for European folklore: he researched and collected hundreds of Irish stories great and small which otherwise might have been lost, casting them into an epic volume. It was such a monumental and widely-acclaimed work that it won the Nobel Prize for Literature in 1923.

If you can get an older edition, it includes typical "fairy tale" illustrations of good quality. I can't promise the one for sale on Amazon has them, but there is a

Review: A smaller and humbler volume but with gorgeous ink illustrations, Claymore and Kilt: Tales of Scottish Kings and Castles attempted to bolster Scots pride rather in the same manner as W.B. Yeats' anthology fostered Irish pride.

A very Scottish author translates Scottish culture and spirit for the rest of us, retaining as much of the language as he thinks we can handle. 157 pages with storybook-sized type, this is definitely for reading pleasure not scholarship. It's just 11 legends, but they are beautifully retold. My favorite is the tale of the Garberlunzie Man, a no doubt apocryphal story on the classic pattern of the King/god in disguise roaming the land to see his subjects are treated fairly.

When I was about 10, this was my favorite book in the world. I had it checked out of the library continually. My mother looked high and low for years before finding me my own copy, since there was no internet then to search used book merchants. 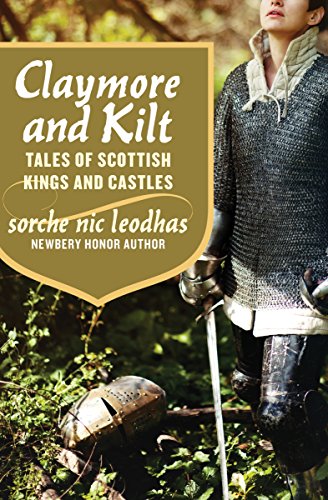 I don't own these books, but they have good reader reviews and/or I trust the publisher (e.g. Penguin translations).