Children of Loki from Scandinavian Stories

You've heard of Loki, known as the Trickster, but do you know his children? Their story is not for telling to the little ones, for they are revolting, monstrous beings.

For example, there were the two sons who fought each other so badly they turned into wolves and slaughtered each other.

He had more children than this, fearsome and frightening, who play a major role in the way the worlds are run. Both the world of the gods and the world of men.

I want to introduce you to three of Loki's children - Fenrir, Jormungand and Hel.. You will scarcely believe what dreadful children they were!

The eldest and the fiercest

Fenrir, the Wolf, is the eldest of the three children of Loki and Angrboda.

Fierce and terrible in his wolf form, he was captured by the gods in the middle of the night from his mother's hall and kept captive in Asgard. There he grew so large and fierce that only Tyr was brave enough to feed him. And that cost Tyr his arm!

The gods became so afraid of Fenrir they decided to bind him, (killing was forbidden in Asgard) and so made a chain of iron links called Laeding.

They challenged the Great Wolf to be bound up in the chain to test his strength. Fenrir took the challenge and broke the bonds with no problem.

The gods then quickly made another chain from larger links, larger than even anchor chains, and they called it Dromi. They challenged Fenrir once more, and again he broke it with no problem, for he had grown even stronger since his breaking of Laeding.

The gods were now truly terrified!

How Fenrir was Bound and Gagged!

(and Tyr lost his hand)

Odin sent Freya's servant Skirnir out into the nine worlds to find someone to make a chain strong enough to bind the giant wolf. Skirnir went to the land of the dwarves in Svartalfheim where they devised a silk rope called Gleipnir.

It was made from the sound a cat makes when it moves, a woman's beard, the roots of a mountain, the sinews of a bear, the breath of a fish and spit from a bird.

(That's why you can't find many of these things very easily nowadays.)

Skirnir hurried back to Asgard with the silk rope and gave it to Odin. The Allfather invited Fenrir to the island of Lyngvi in middle of Lake Amsvartnir to test his strength.

Fenrir took the challenge but, when he saw Gleipnir, he suspected that magic was involved and hesitated until Tyr offered to place his right hand into Fenrir's mouth.

Fenrir was bound, but when he couldn't break the rope, he bit off Tyr's hand.

Fenrir is now one mile under the earth

With huge rocks to keep him there

The gods then took a chain called Gelgja and tied one end of it to Gleipnir, then tied Gelgja to a boulder called Gjoll and drove Gjoll one mile into the earth.

After that was done, they placed an even larger boulder called Thviti on top of Gjoll.

The gods then gagged Fenrir with a sword, placing the tip on the roof of his mouth and the hilt on his lower jaw.

And that is where he will be until Ragnarok, when the world ends

Jormungand - The second and the slimiest

We are all wrapped in the coils of Jormungand

Jormungand was the second child of Loki and Angrboda.

He was also kidnapped by the gods from the hall of Angrboda, his mother and carried off to Asgard.

Fom there he was cast into the waters that surround Midgard. There he lay until he grew so large that he spans the entire world, deep in the ocean where he bites his tail, and all humanity is caught within his coils.

The last but certainly not the least

Hel was the youngest of three children born of Loki and the giantess Angroboda.

When the gods kidnapped all three children, Hel was cast into Nifilheim to look over the dishonoured dead, or those that died of illness or old age, sharing whatever food she had with them.

It was in Nifilheim that she built her hall called Eljudnir, and within she had a manservant and maidservant named Ganglati and Ganglot, whose names mean Tardy. They were so slow that no one could tell if they were coming or going, or indeed if they were moving at all.

When Baldur the Beautiful died, he went to Hel's hall. Nine days later, Hermod, the brother of Balder, rode the eight-legged steed Sleipnir there to meet with Hel. He told of the grief the gods were suffering and begged her to release the fair god.

Hel agreed to let Baldur go back to the living world on the condition that everyone in the nine worlds truly did grieve him. Hermod returned to the living world and informed the gods of the successful outcome. Then the gods managed to get all things in the nine worlds to grieve, except for one giantess named Thokk, who was really Loki in disguise.

Because of Loki, Balder will remain in Nifilheim until Ragnarok. 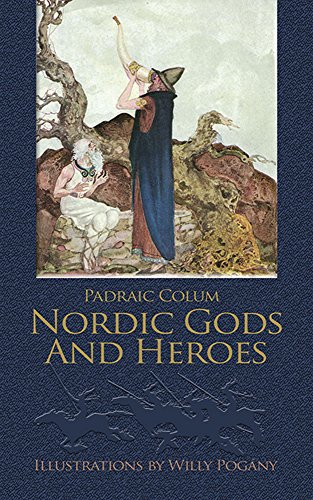 Nordic Gods and Heroes
Padraic Colum recounts wondrous tales for children but this is NOT a childrens' book. It's a book which I still pick up for a refresher on the enticing myths and legends of the frozen North. Tolkien read this book!
Buy Now

Hel will make her last stand at the Twilight of the Gods when she brings her horde of dead up and out to join her father in the final battle of Ragnarok.

Unlike her brothers Fenrir the Wolf and Jormungand the Serpent, we don't quite know how she will meet her doom on the field of Vigrid .. but meet her doom she surely will.

For it is destined so.