The Passing of Arthur

What happened to King Arthur? Some say he was slain at the Battle of Camlann and buried there.

But there are many stories about the passing of Arthur, is it true that he was transformed into a raven or was he placed in a tomb which then vanished in a mist? Was he taken to Avalon to be healed of his wounds? Perhaps he sits in Valhalla with the fallen warriors of the North.

No, none of those tales are true. Arthur, the Once and Future King, Rex quondam Rexque futurus, has joined the other Sleeping Heroes, and will return to help Britain in her darkest hour.

According to the Legend, Arthur has been wounded slightly in the final battle against Mordred,and he orders his arms to be taken off. Then, unexpectedly, a youth rides up and pierces Arthur with a spear and is killed by Arthur with another spear as he rides off.

The now seriously wounded Arthur orders that he be taken to be cured in the Holy Island off Anglesey, (where Merlin now dwells with the thirteen treasures of Britain). However the physicians fail to cure him and he dies.

His body is taken to a chapel whose door is so narrow that the funeral bier cannot pass through and so is left outside the chapel for a few moments. An extraordinary storm with a cloaking mist mysteriously arises and the coffin is hidden from the attendants.

The body of Arthur vanishes

But the mist shows us that the Otherworld is coming close to the world of everyday, and during this period of storm and mist, Arthur's body vanishes.

The entire Company of the Round Table has been killed with the exception of Sir Bedivere, who carries the King to a lake on the borders of Avalon where Arthur first received Excalibur from the Lady of the Lake.

Arthur orders Bedivere to throw the sword into the lake in order to fulfill a prophecy written on the blade. Sir Bedivere resists twice, but on the third time obeys and is rewarded by the sight of an arm "clothed in white samite, mystic, wonderful" rising from the water to catch the sword.

The wounded Arthur is finally carried away on a magical ship with three queens and sails away to Avalon, with Sir Bedivere watching, as the new sun rises on a new year.

Illustration from The Boy's King Arthur:

Is Arthur in Avalon?

The Isle of Apples, beloved by Celtic mythology, is a happy place where crops grow of their own accord, sheep and goats milk themselves, honey falls from the tree into pots, and everywhere grows the magical fruit of the Apple.

By the 12th century Avalon became associated with Glastonbury, when monks at Glastonbury Abbey claimed to have discovered the bones of Arthur and his Queen. Though no longer an island at the time, the high conical bulk of Glastonbury Tor had been surrounded by marsh before the surrounding fenland was drained. Or was it Anglesey?

Historically, Anglesey has long been associated with the Druids. General Suetonius Paulinus, determined to break the power of the Druids, attacked the island in 60, destroying the shrine and the sacred groves. (News of Boudicca's Revolt reached him just after his victory, causing him to withdraw his army before consolidating the conquest.)

Is this where Arthur lies, not dead, but only sleeping?

Anglesey and the Druids

Perhaps Arthur did actually die and was carried away in order that he might return again. Some say he was taken away in a boat by women, three women or four, or possibly nine. All of them are keening and wailing in true Celtic fashion.

We have the names of four of these ministering women, all of them with direct mythological associations.

Morgan le Fay, enchantress, necromancer and the half-sister of Arthur,

The Queen of Northgalis, an associate involved in the magical imprisoning of the sleeping Lancelot,

The Queen of the Wastelands, Perceval's aunt, who gave up her great lands to become a solitary hermit and

Nimue, the Lady of the Lake (image by ravenscar)

More about the Women in Arthurian Legend

Women in the Tales of King Arthur
More women from the legend of Arthur, quiet in the background with their voices silenced. The portrayals of women in the legend tell us much more about the attitude of the storytellers than about the women themselves....

A different view of Mordred 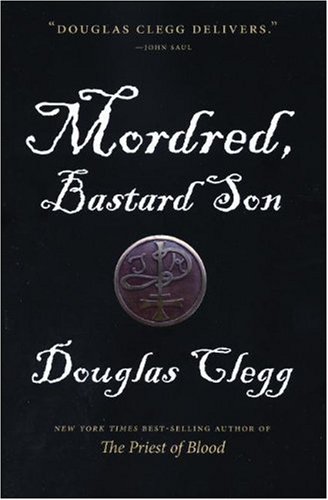 There has to be a villain in every story and the Legend of Arthur is no exception. In this case, the evil character is Mordred.

Mordred is known as the traitorous leader of the rebellion which leads to Arthur's downfall and some medieval sources say that he is Arthur's son. It's also been said that it was Mordred who killed Arthur.

But who was Mordred?

Originally named Medraut, he is possibly an historical Welsh figure who diasgrees with Arthur and does battle with him at Camlann, with fatal results for both.

The highly imaginative Geoffrey of Monmouth cast Mordred in a villainous role and that's the part he still plays today. (Geoffrey has a lot to answer for).

Meet Mordred, as you've never seen him before in Mordred, Bastard Son

Another vision of the time and myth of Camelot. Douglas Clegg presents a compelling and beautifully written story.

The Sleeping Hero is a prominent motif in folklore and mythology. You will find him across Europe, sleeping in a cave, or under a mountain, beneath an ancient castle, in a barrow burial mound - somewhere far from curious eyes.

The Sleeping Hero, accompanied by his armed retainers, is almost always a real historical figure, a man of some military consequence in the history of his nation.

Nobody ever knows the Sleeping Hero is there, at least not until some simple herdsman wanders into the cave, typically looking for a lost animal, and sees the hero.

All of these stories mention that the hero has grown a long beard, to make sure we understand that he has been sleeping beneath the mountain for a long time.

Who are the Sleeping Heroes?

A timeless classic of fantasy from Poul Anderson

Can Holger Carlsen, the soldier snatched across Time, be the legendary hero, the only man who can save the world?

It's more than 40 years since I first read Poul Anderson's classic and it's just as likeable now as it was then. Germanic legends of the Sleeping Hero revealed, a Carolingian world parallel with World War 11, a knightly epic complete with trolls.

While you're waiting for Arthur's return, you can leave a comment. All comments are very much appreciated and you don't have to be a hero, asleep or otherwise, to leave yours