LEGEND OF THE NATIVE AMERICAN DREAMCATCHER

The Origin of the Dreamcatcher

Dreamcatchers are believed to have originated in the Ojibwa Nation. A dreamcatcher is a handmade object based on a willow hoop, on which is woven a loose net or web. It is then decorated with personal and sacred items such as feathers and beads.

Dreamcatchers have come to be seen by some as a symbol of unity among various Indian Nations, as well as a general symbol of identification with Native American or First Nations cultures.

Read on to learn about the legend of the dreamcatcher, as well as its principle player, Iktomi the Spider.

Legend of the Native American Dreamcatcher

Long ago when the world was young, an old Lakota spiritual leader was on a high mountain and had a vision. In his vision, Iktomi, the great trickster and teacher of wisdom, appeared in the form of a spider. Iktomi spoke to him in a sacred language. As he spoke, Iktomi the spider picked up the elder's willow hoop which had feathers, horsehair, beads, and offerings on it, and began to spin a web.

He spoke to the elder about the cycles of life; how we begin our lives as infants, move on through childhood and on to adulthood. Finally we go to old age where we must be taken care of as infants, completing the cycle. "But", Iktomi said as he continued to spin his web, "in each time of life there are many forces; some good and some bad. If you listen to the good forces, they will steer you in the right direction. But, if you listen to the bad forces, they'll steer you in the wrong direction and may hurt you. So these forces can help, or can interfere with the harmony of Nature." While the spider spoke, he continued to weave his web.

When Iktomi finished speaking, he gave the elder the web and said, "The web is a perfect circle with a hole in the center. Use the web to help your people reach their goals, making good use of their ideas, dreams, and visions. If you believe in the Great Spirit, the web will catch your good ideas and the bad ones will go through the hole." The elder passed on his vision to the people and now many Indian people hang a dream catcher above their bed to sift their dreams and visions. The good is captured in the web of life and carried with the people, but the evil in their dreams drops through the hole in the center of the web and is no longer a part of their lives. It is said that the dream catcher holds the destiny of the future.

In Lakota mythology, Iktomi is a spider-trickster spirit, and a culture-hero for the Lakota people. He is the son of Inyan, a creator god similar in form to other male creator gods. Iktomi has a younger brother, called Iya, who is a destructive and powerful spirit.

In the old days, Iktomi was Ksa, or wisdom, but he was stripped of this title and became Iktomi because of his mischievousness. He began playing malicious tricks because people would jeer at his strange or funny looks. Most of his schemes end with him falling into ruin when his intricate plans backfire. These tales are usually told as a way to teach lessons to Lakota youth. Because it is Iktomi, a respected deity playing the part of the fool, and the story is told as entertainment, the listener is allowed to reflect on misdeeds without feeling like they are being confronted. In other tales, Iktomi is depicted with dignity and seriousness, such as in the popularized myth of the dreamcatcher.

His appearance is that of a spider, but he can take any shape, including that of a human. When he is a human he is said to wear red, yellow and white paint, with black rings around his eyes.

There is a prophecy that stated Iktomi would spread his web over the land. Today, this has been interpreted by some contemporary Native Americans to mean the telephone network and the world wide web. Iktomi has been considered by the Lakota from time immemorial to be the patron of new technology, from his invention of language he gave to the people to today's modern inventions, such as the computer or robots.

Oh, What a Tangled Web We Weave!

A monstrous web appeared in a State park in Dallas that spans over 200 yards. Check out the full story here:

This dreamcatcher mandala is constructed in the traditional way out of grapevine and found feathers, with a small turquoise bear fetish attached for added protection. 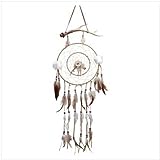