Ask anyone for the name of an Ancient Egyptian Goddess,and the answer will probably be Isis.

But Isis was on her throne in heaven and the ordinary people had more approachable deities for everyday affairs. In ancient Egypt religion was very much like it is in our modern times, It was personal, and not everyone worshipped in the same way or prayed to the same god.

Women called on Bast, the Protector and also on Heket the Fertile with her life-giving powers, she who was manifested on earth in frog form.

The power of her fertility was seen everywhere, in the germination of the grain, in the pregnant animals and in the millions and millions of tiny frogs which sprung up on the river banks overnight

Heket breathed life into the unborn

Heket was associated with fertility and pregnancy. She gave all creatures the breath of life before they were placed to grow in the womb, and she presided over the birth.

Children were as precious in ancient Egypt as they are today.

Childbirth was hazardous, and the Egyptian women had none of the benefits of modern medicine, emergency surgery and intensive care humidicribs. A safe labour came down to prayer.

Pregnant women prayed to Heket wearing amulets, rings and other talismans with her likeness. They sought her help during birth and in the latter stage of labour her presence was indispensable.

Midwives were 'Servants of Heket'.

Frogs appear on jewelry and other ornaments in ancient Egypt.

Some researchers say Heket became known in ancient Greece as the Goddes Hekate of the Crossroads.

The connection is clear at any rate, for both Heket in her frog form, and Hekate, the keeper of the gate between life and death, are representations of the state of change.

At the point of transition from one state to the next. a new life comes out of the body of the old. This is part of the cycle of destruction and recreation which we recognise as aspects of the Crone Goddess.

Frogs were so important that they were often embalmed after death

Bring a Frog into your Life

Following the Frog back to Egypt

Marija Gimbutas describes the frog as the main incarnation of the chthonic magician goddess and outlines across old Europe where the amphibian deity is linked with birth and pregnancy.

In her acclaimed book The Language of the Goddess, Gimbutas followed the worship of the frog/toad genetrix back for eight thousand years to Egypt.

She writes that all of these frog deities " have roots in the prehistoric Frog Goddess, the Egyptian Goddess Creatrix, Haquit (Heket ),whose functions were both to bring death and to restore life"..

The Language of the Goddess
A truly wonderful book on early religion. A counter-balance to the traditional patriarchal view of prehistory
Buy Now

Have a cup of tea with a frog 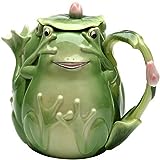 Another Goddess from Egypt

Bast the Beloved from Tales of Ancient Egypt
Bast is the protector of cats, women and children and holds the mysteries of the cat in her power - those magnetic animals with such strong power to fascinat...

Did you know of Heket before?