The Yorkshireman who was Wallis Simpson's other lover

The world heard the news at the beginning of 2003. The events had happened nearly eighty years previously but the abdication of King Edward Vlll, to marry his mistress Wallis Simpson, was still scandalous news.

This time, the newspapers were telling us that not only was Wallis married when she had her affair with Edward, she also had another secret lover.

Secret papers, held by the public records office, were full of revelations. They include the divorce documents of Wallis and her husband, reports of surveillance by Special Branch, the text of an address that Edward wanted to give to the nation (but was prevented from doing so) and many more.

But the papers that proved to be the most scandalous revealed that during her affair with Edward, Mrs Simpson was also having a relationship with another man.

How did this information come to light?

It was explained to the public that documents of this nature are always secret but made public after a certain number of years had passed. In this case, authorities decided to keep them unavailable until the Queen Mother - Wallis' arch-enemy - had died.

The papers revealed that offices from Special Branch (the British secret police) has been conducting around-the-clock surveillance on Wallis because of her known relationship with Edward. Edward was then the Prince of Wales but was also the heir to the throne.

His father, the king, was in his seventies and was in frail health. The government knew that Edward would become king in the very near future so were naturally concerned by his 'liaisons'.

The Special Branch investigations revealed that Wallis Simpson was also having an affair with Guy Marcus Trundle.

Who was Guy Trundle?

Guy was born in York - the son of a clergyman. He was born in 1899, making him a few years younger than his mistress.

He was a married man and his background is relatively well documented. His family was eminently respectable and he was involved in both the First and Second World wars. Indeed, in WW2 he was in the Royal Air Force and became a wing commander.

Before WW2 however, and when he was allegedly involved with Mrs Simpson, he was described as a 'car mechanic and salesman' working for Ford Motor Company.

Whether this was Special Branch snootiness we will never know; Trundle was living at a 'good' London address. Indeed, Princess Elizabeth, the future queen, had been born on the same street some ten years before the abdication. 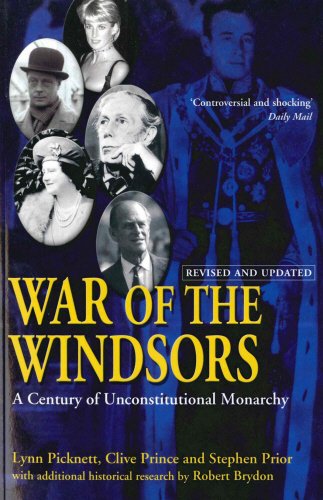 War Of The Windsors
Buy Now