Was H. C. Andersen greatest writer of fairy tales of all times or was he simply at the right time in the right place? Why is his work so appealing even now, a century and a half after first publication?

What do we really know about great master who's youth dream was to become famous, but not through writing? And what can we say about most famous fairy tales written by Hans Christian Andersen?

Were Little Mermaid, Ugly Duckling, Thumbelina and other masterpieces made purely of his imagination, adapted from folk motifs, or only artistic expressions of the most important elements from his own life?

Hans Christian Andersen was born on April 2 1805 in Odense, third biggest city in Denmark. His father was a shoemaker struggling to support himself and the family, so at some point he enrolled in the army to earn at least some extra money. He didn't experience any battle but rough army life ruined his weak health and after a year he returned home and soon after died at the age of only 33 years.

Hans Christian had health issues too. He was extremely emotional and had episodes of hysterical attacks with cramps. For some time he was wrongly diagnosed as an epileptic. He cherished many of his youth phobias through all of his life.

About one year after his father's death Andersen's mother married another poor shoemaker. He also died soon and Hans Christian's mother supported her and her two children as a washing lady. Hans Christian helped to improve family budget with working for a weaver, than a tailor and for some time as worker in a tobacco factory, where other workers humiliated him. They mocked him being to girlish and on one occasion even pulled his trousers down!

Andersen's mother was very superstitious and she was the one who introduced Hans Christian to the mysterious world of folklore. Hard working helped turning her into heavy drinker. She became an alcoholic and eventually died of delirium tremens but Hans Christian Andersen left her and his six years older half sister (she was illegitimate daughter of his mother and well known womanizer) in the quest for fortune many years before. He was only 14 years old when he departed for Copenhagen to become famous.

From Odense to Copenhagen 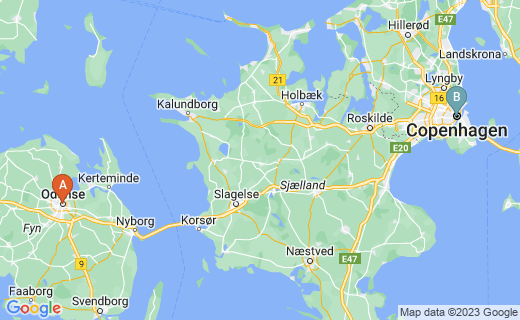 “I am going to be famous. First you suffer terribly, and then you are famous.”

Hans Christian Andersen had poor background and wasn't of very attractive look. His biggest treasure was his imagination. Anyway he truly believed he can achieve something if only he tries hard enough. One of his most famous fairy tales The Ugly Duckling resembles his life in many points.

In Copenhagen he tried his luck at Royal Danish Theater as singer and with his astonishing tenor he was accepted but soon his voice changed because of puberty and he lost his position in the choir. Andersen's next mission was dancing.

Being about 185 centimeters (more than 6 foot) tall and wearing shoes size 46 or more he didn't have a chance. He than tried to become an actor. This was another failure. Everything he tried was connected with theater but one of his colleague told him he seems more like an author than actor, so he should focus on writing.

Andersen listened this advice and started to write. He returned to school, although being much older than other students (he was 17 and they were 11 or 12), he felt excluded again and he later remembered these years as maybe most bitter of is life.

H. C. Andersen never really mastered the grammatical rules but later this actually proved as maybe his most powerful weapon because his writing to the very end of his life stayed very similar to real life language and even today it still sounds fresh and lively.

Another interesting glimpse from his first years in Copenhagen: when he came into the city, he searched for one of his aunts, who was relatively well situated, to live under her roof for a while. Officially she was a rich widow but in reality she gained her wealth with the oldest profession in the world...

One of his most saddest fairy tales Little Match Girl is probably loaded with Andersen's bitter and lonely memories from his early years in Copenhagen.

Hans Christian Andersen wrote several plays and all of them were rejected. Most of times he didn't get any answer from editors and others, but sometimes they wrote simply: Do not send us your texts anymore, please. He managed to publish some shorter texts at his own expense, The Ghost at Palnatoke's Grave being first (1822), but without any real success.

He didn't loose courage and in 1828 he published short story with rather long title: A Journey on Foot from Holmen's Canal to the East Point of Amager. This fantasy story (also published at his expense) in then popular romantic style, followed by collection of poems, comedy and some other texts brought him enough publicity to earn him travelling stipend from king Frederick VI. He used it for a journey to Italy, first of his many European journeys which inspired several of his travelogues.

Of course he continued with other writings and his improved style, supported with more and more personal connections established his reputation of a good and interesting author who really came in demand after his first fairy tales.

His luck changed for good like in so many of his stories for kids!

Hans Christian was thirty years old when he wrote his first fairy tale: Tinder Box, based on old Scandinavian tale and influenced with Aladdin and Magic Lamp from 1001 Nights.

His next fairy tales were also rewritings of old folk tales (Little Claus and Big Claus, The Princess and the Pea, The Little Mermaid, Thumbelina and others) but in all of them we can already notice very personal author's touch and even recognize some important characters from his private life.

His first work not based on folk or literary models was The Steadfast Tin Soldier. It is a story about toy soldier with only one leg, who falls in love with a ballerina made of paper.

After series of adventures set in environment of child's fantasy world with different toys boy throws the soldier into fire and a blow of wind throws the ballerina after him. Not exactly a happy end, but beautiful tribute to love, desire and fate.

Which is your favorite fairy tale by Hans Andersen?

After many years of struggling recognition finally came to Andersen. Critics never liked him but more and more people enjoyed his romantic and imaginative narration and after first collections of his fairy tales came money, translations, more journeys and invitations from high society.

Hans Christian wined and dined with many royalties and noble men in Europe and he also personally met many famous artists of his era. Honore de Balzac, Charles Dickens, Alexandre Dumas, Heinrich Heine, Victor Hugo, Franz Liszt and Richard Wagner were only few of them. He enjoyed their company but feelings were not always mutual.

In 1857 he visited Charles Dickens in London for holidays. He enjoyed his supposed to be two weeks long visit so much he decided to extend it to full five weeks. When he finally left Charles Dickens wrote on the mirror in guestroom:

"Hans Christian Andersen slept here for five weeks but for our family it seemed like ages!"

Andersen's love of music can be seen from one of his quotes:

Andersen and The Nightingale

Hans Christian Andersen didn't find much love in his life although he was in love several times. He wasn't even sure of his sexual orientation because for some time he was attracted to ladies and others to gentlemen.

His most known sympathy and unrequited love was by huge margin Swedish opera singer Jenny Lind, famous soprano, known as Swedish Nightingale. She couldn't return him love and have told she "sees him as a brother".

Nobody knows how intimate really was her relationship with famous conductor Felix Mendelssohn, but we know she later married a pianist Otto Goldschmidt with whom she had three kids. We also know (from her letters) her 'only true love' Frederick Chopin was her unrequited love.

None of Andersen's loves never result in a relationship, but they can certainly be felt in his fairy tales. The aforementioned Jenny Lind inspired at least three of his works with Nightingale being most famous of all. The setting in China was inspired by fantasy motifs from Tivoli Gardens in Copenhagen where Jenny Lind had first performance in Denmark.

Similar to a a bird nightingale she wasn't attractive by first sight but astonished her audience when she started to sing. And we can easily recognize Hans Christian Andersen in kitchen helper who was the only one able to find the precious bird. But when the bird performed in front of the Chinese emperor kitchen's helper could not see that because she was not of noble origin.

This beautiful fairy tale, the story about loyalty, disappointment, love, art, nature, loneliness and ephemerality is too rich in its undertones to be labeled as only a tribute (and what a tribute!) to a famous singer but we can probably learn a lot more about Andersen's feelings and doubts than from his many biographies including three (yes, three!) autobiographies.

Especially in his later years Andersen was very afraid of being buried alive. So every evening he put a note to his night table, where was written: "I am not dead. I just look so!"

The death of the greatest fairy tale writer

Hans Christian Andersen felt out his bed in 1872 and suffered several injuries. He never regained full health again. Soon after he got bronchitis and after that signs of liver cancer showed up.

The Annotated Hans Christian Andersen
Talking about fair tales, Maria Tatar is one of greatest experts in the world. This annotated edition of Andersen's Fairy Tales is perfect example of her wide knowledge on the subject. Andersen's stories are beautiful as they are but knowing many 'behind the scene' facts and connections with historical events and other influences makes them even more interesting.
Buy Now

My resources in Slovene language

Here are two of my articles and a minisite with some of Andersen's fairy tales summaries and interesting background. All written in my native Slovene language.