Are you looking for fun worksheets, children's books, and video clips for teaching and/or learning about Illinois? Included are links to wonderful worksheets and lapbooks, book suggestions for children, YouTube videos, and more -- all related to the state of Illinois! This is part of a series of pages I created while teaching about the fifty states. You can find the links for my pages for each of the 50 states at Teaching the 50 States of America .

I have been to Illinois. Have you?

What Makes This State Special: The Willis Tower

What Makes This State Special: The First McDonald's

One of Chicago's most popular attractions, Millennium Park is a hub for art, music, and more. Some of the more popular attractions include the stainless steel sculpture Cloud Gate (also known as "The Bean”), the Crown Fountain, Lurie Garden (which is considered to have the world's largest green roof), McCormick Tribune Plaza & Ice Rink, and more.

Abraham Lincoln, who was a lawyer and legislature in Illinois before becoming president, raised his family near Springfield. Every year many visitors come to Springfield to visit the Abraham Lincoln Presidential Library and Museum that takes you from his life in the log cabin to his assassination. A number of his artifacts are on display, including the original copy of the Gettysburg Address, the box seat at Ford Theatre, and personal items such as his wife's wedding dress.

What Makes This State Special: Nabisco

Nabisco's factory in Chicago is the world's largest bakery. Every year the bakery produces more than 320 million pounds of snack foods including Oreos, Chips Ahoy!, Ritz Crackers, and more. Nabisco's original offices were located in the world's first skyscraper, the Home Insurance Building, which is located in the Chicago Loop.

Illinois's state flag features the state seal with a bald eagle on a rock carrying both a shield and a banner with the state motto in its beak. The shield has thirteen stars and thirteen stripes to represent the original thirteen states. It also has the year Illinois became a state (1818) and the seal was adopted (1868).

Illinois's state quarter includes Abraham Lincoln as a young man, a farm, the Chicago skyline, twenty-one stars along with the words "21st state/century" because Illinois was the 21st state admitted to the Union.

Our Favorite Children's Books on Illinois

Our Favorite Picture Book on Illinois

L Is for Lincoln: An Illinois Alphabet (Discover America State by State)
This is my favorite series on individual states. Each page has a simple rhyme concerning the word starts with that letter and then includes a bit more about that particular regional animal, location, etc. It provides a wonderful overview of what makes each state unique. Both modern and historical aspects of the state are includes. Plus, the illustrations are beautiful!
Buy Now

More of Our Favorite Picture Books on Illinois

Abraham Lincoln by Ingri and Edgar Parin D'Aulaire is a longer picture book, but is provides lots of information about Lincoln's time in Illinois. It is also a Caldecott winner.

Growing Seasons by Elsie Lee Splear is about the different seasons of planting on a farm in Illinois in the early 1900s. It does a good job of reminding children that most of Illinois focuses on farming. It also has delightfully sweet illustrations.

Prairie Numbers: An Illinois Number Book (America by the Numbers) by Kathy-Jo Wargin is similar to the above alphabet book but it goes through the sites and history of the state using numbers rather than letters of the alphabet.

The Christmas Tree Ship by Jeanette Winter is a true story about a man who sailed through heavy snowstorms across Lake Michigan each year to deliver Christmas trees to Chicago. His family continued the tradition even after he passed away.

The Great Chicago Fire of 1871 (Disasters in History) by Kay Melchisedech Olson was a favorite of my boys (ages 6 and 9), both of whom are especially fond of the books in the Graphic History series like this one. They provide historically accurate information in a comic-book format. Also look for the book on Abraham Lincoln from the same series!

W is for Windy City: A Chicago City Alphabet by Deborah Dover Layne uses the alphabet to go through the various landmarks and history of Chicago including Lake Shore Drive, the Magnificent Mile, Navy Pier, etc.

Where Is the Sears Tower? by Tad Mitchell follows a pigeon as he travels past the various landmarks of Chicago in search of his grandfather who lives at the Willis Tower.

Larry Gets Lost in Chicago by Michael Mullin is about a dog and his family exploring the sites of Chicago including Lake Michigan, Willis Tower, the Art Institute, Wrigley Field, Lake Michigan, Lincoln Park Zoo, and more.

Ruth Law Thrills a Nation by Don Brown is the true story of a woman who courageously set a record by flying a one-day solo flight between Chicago and New York in 1916.

How to Draw Illinois' Sights and Symbols (Kid's Guide to Drawing America) by Jenny Deinard is a wonderful book that combines simple art lessons with geography.

Our Favorite Board Book for Babies, Toddlers, or Preschoolers 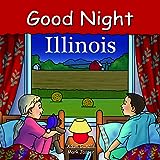 Good Night Illinois (Good Night Our World)
This excellent board book covers some of the sites of Illinois, such as John Deere Pavilion, Abraham Lincoln Presidential Museum, the Illinois State Fair, and more. It has one sentence per page and includes delightful illustrations.
Buy Now

More Good Board Books for Babies, Toddlers, and Young Preschoolers

Larry Loves Chicago! (Larry Gets Lost) Board book by John Skewes is about a dog who visits the sites of Chicago including the Navy Pier, Shedd Aquarium, the “Bean”, and more.

123 Chicago (Cool Counting Books) Board book by Puck goes through the numbers one to ten and features famous sites and symbols from Chicago including the Navy Pier fireworks, Chicago-style hot dogs, deep dish pizza, and more. It also includes a map of the city. 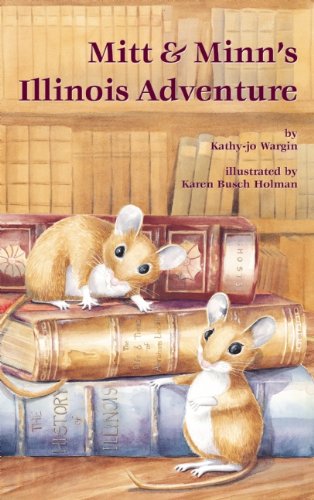 Mitt & Minn's Illinois Adventure (Mitt Midwest Series, 4)
Is the cute story of two mice who follow a cow from Illinois in search of their parents. Along the way they learn quite a bit about the history and geography of Illinois.
Buy Now

The Great Fire by Jim Murphy (144 pages) is a Newbery Honor Book about Chicago's Great Fire in 1871 on a dry Sunday. It includes what occurred and follows some of the lives of those who survived the fire.

A Long Way From Chicago by Richard Peck (148 pages) is about a brother and sister who visit their grandmother in a small Illinois town during their summer vacations during the Great Depression (1929-1935). The story is filled with humor and adventure, including the grandmother taking them flying in a plane.

Fair Weather by Richard Peck (160 pages) is about a girl and her poor family from a small town in Illinois who goes with her adventure-loving aunt to Chicago World's Fair in 1893.

On The Wings of Heroes by Richard Peck (160 pages) is about a boy living in a small town in Illinois and what happens in their town during WWII, including having his brother enlist.

Our Favorite Free Worksheets and Lapbook Pages on Illinois

All About Illinois provides great links to printable worksheets, book suggestions, and activity ideas about Illinois.

Where is Springfield, the capital of Illinois? 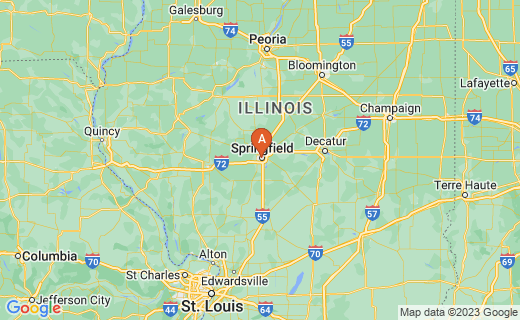