All physical things are made of chemical elements - pure substances that contain only atoms of the same type. There are 94 naturally occurring elements found on Earth such as Hydrogen, Oxygen, Iron, Silicon and Carbon. Another 24 artificial elements have been discovered or synthesized.

...and hydrogen and oxygen and nitrogen and rhenium... - Tom Lehrer's "The Elements" animated

In this 1959 song, satirist, polymath, singer-songwriter Tom Lehrer lists the known chemical elements to a Gilbert and Sullivan tune.

My eight year old son performed this song at his school's end of year talent quest.

If you like this video, you will appreciate more science/mathematical musical humor from the Tom Lehrer Wisdom Channel on YouTube.

An awesome book on the elements - The Elements: A Visual Exploration of Every Known Atom in the Universe by Theodore Gray

A book full of beautiful full page full color photographs of all the elements with witty, non-technical text explaining their properties and uses. 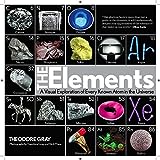 Elements: A Visual Exploration of Every Known Atom in the Universe (RP Minis)
This wonderful book is on my coffee table. Theodore Gray describes his amazing collection of elements and his interesting anecdotes make learning about the elements lots of fun. My kids love reading it too.
Buy Now

Theo Gray (author of The Elements and 2011 winner of the ACS Grady Stack Award for Interpreting Chemistry for the Public) collects elements. He has built The Periodic Table table to display some of his collection.

It's dazzling-it makes science feel like magic in your hands.

Must have iPad app

The Elements is also available as an iPad app

The first really new e-book designed from the ground up for the iPad, this app helps you explore the elements of the periodic table like never before.

This is one of my favorite They Might Be Giants songs for kids from their Here Comes Science album.

Shower with the elements - Get a periodic table shower curtain

Each morning, the periodic table of the elements accompanies me in the shower with this educational shower curtain. For added effect we also have a blue LED shower head - the geekiest bathroom in our city!

Turn on the H2O, lather up with sodium stearate (C18H36O2Na - the major component of soap) and study the periodic table.

the ancients believed there were only 4 elements:

Chemists started classifying our modern understanding of the elements in the 17th Century.

A brief history of chemistry

Starting with the use of fire to control chemical reactions such as cooking, making bricks or refining metal ores, an understanding of chemistry slowly advanced through the centuries in the form of the protoscience of alchemy. Around the 9th Century, chemists started to classify elements and chemical substances and developed systematic and experimental research. The 17th Century saw scientists such as Robert Boyle discovering relationships between volumes and pressures. The discovery of carbon dioxide by Joseph Black and oxygen by Joseph Priestly as well as Antoine Lavoisier's laws of conservation of mass advanced chemistry in the 1700's. During this century, many other elements were discovered and classified and in 1869, Dmitri Mendeleev published the first periodic table of the elements.

Since then discoveries such as Rutherford and Bohr's work on atomic structure, the Curies work on radioactivity, and Watson and Crick's work to deduce the helix structure of DNA have all contributed to modern chemistry and our understanding of the elements.

Wikipedia has some interesting further reading on the History of Chemistry.

Flerovium (114 Fl) and Livermorium (116 Lv) were both synthesized first in the Flerov Laboratory of Nuclear Reactions in Dubna, Russia and confirmed at the Lawrence Livermore National Laboratory in California, USA.

Periodic Videos is the ultimate YouTube channel for all things chemistry.

I find these chemistry videos fascinating. Brady Haran and the Chemistry Department of Nottingham University have produced videos about all the elements of the periodic table. I particularly like the videos where they have filmed reactions with a slow motion camera. Sometimes the professors are surprised by new discoveries that the slow motion reveals.

Below are videos about the first three elements of the periodic table - a small selection from their playlist of nearly 2000 videos!

Want a crash course in chemistry?