Ready for great YouTube video clips, children's books, and free worksheets and lapbooks for teaching and/or learning about New Mexico? Here you will find my favorite picks we used while studying the individual fifty states of America. Whether you're planning a trip to New Mexico, learning or teaching about the state, or on the lookout for a way to "visit" New Mexico without paying for the plane ticket, look no further! This is part of a series of pages I created while teaching about the fifty states. You can find the links for my pages for each of the 50 states at Teaching the 50 States of America .

Carlsbad Cavern, the 5th largest largest cavern in North America, is known for its bat population, which is estimated to be in the millions. Carlsbad Cavern can be found in Carlsbad Caverns National Park in the Guadalupe Mountains and receives visits from over half a million tourists each year.

What Makes This State Special: The Highest Capital City in America

Santa Fe, the capital of New Mexico, is the highest capital city in America. It is 7,199 feet above sea level. The city is known for its unique combination of both ancient native culture and modern arts along with its spicy Southwest cuisine.

Tour Through the City of Santa Fe

The Albuquerque International Balloon Fiesta is the largest hot air balloon festival in the world and is said to be the world's most photographed event. Over the course of nine days hundreds of hot air balloons fly over the Sandia Mountains as they compete in various ballooning events.

Since the world's 1st Atomic Bomb was tested in 1945 in the deserts of New Mexico, the state has become a leader in the aerospace industry with the help of the Los Alamos National Laboratory, which is the largest employer in the state.

White Sands National Monument is a desert of white sand dunes made of gypsum crystals rather than sand.

What Makes This State Special: The Oldest Church in America

Built in 1610, the San Miguel Mission (also known as San Miguel Chapel) is the oldest church still in use in America. It still has its many of its original adobe walls.

New Mexico's State Flag has the red and yellow colors of Spain's flag since it was originally owned by Spain. It has a red sun with 4 rays, which is the ancient sun symbol of the Zia Pueblo Native Americans who believed they were given 4 gifts in 4 parts: 4 seasons, 4 directions, 4 parts to the day (sunrise, noon, evening, and night), and 4 seasons of life (childhood, youth, middle years, and old age).

New Mexico's state quarter features and outline of the state and the same Zia Sun Symbol that is on the state flag.

E is for Enchantment: A New Mexico Alphabet (Discover America State by State)
There are so many children's books on individual states. We sorted through quite a number of them before concluding that this series on individual states is the absolute best for my family, with children of multiple ages.
Buy Now

More of Our Favorite Picture Books on New Mexico

Juan and the Jackalope by Rudolfo Anaya is a cute New Mexico-style tall tale during which Bill and his Jackalope outdo Pecos Bill for the hand of Rosita and her rhubarb pie. It also includes green chili and purple moonlight.

How to Draw New Mexico's Sights and Symbols (Kid's Guide to Drawing America) by Aileen Weintraub is part of a wonderful series that combines state geography with art. Even my 6 year old could follow the drawing directions and my 9 year old created some impressive drawings while learning more about New Mexico.

Georgia Rises: A Day in the Life of Georgia O'Keeffe by Kathryn Lasky describes what a typical day for artist Georgia O’Keeffe may have looked like while she resided in Abiquiu, New Mexico. It does a good job of portraying how she was inspired to paint by the objects and scenery of New Mexico.

The Santero's Miracle: A Bilingual Story by Amy Córdova (Illustrator) and Enrique R. Lamadrid (Translator) is a bilingual story that shoes the culture and traditions of the remote mountains of Northern New Mexico. It tells the story of a man who is teaching his grandson how to carve a saint. The snow is heavy and their neighbor falls ill. The grandfather has a dream which leads them to help their neighbor.

Jackalope by Janet Stevens is a silly tall tale about the imaginary Southwest animal, the jackalope, and how the jackrabbit grew horns and became a jackalope.

The Farolitos of Christmas by Rudolfo Anaya takes place in San Juan, New Mexico during Christmas during the late 16th Century as it tells the story of a young girl who creates little lanterns or farolitos to light the path for the Christmas carolers and her father as he returns from the war.

The Three Little Javelinas by Susan Lowell is a New Mexican version of "The Three Little Pigs." This version has javelinas, a coyote, tumbleweeds, saguaro cacti), red chile sauce, adobe bricks, and more.

Paco & The Giant Chile Plant by Keith Polette is a New Mexican version of "Jack and the Beanstalk" which takes place in the New Mexican desert. It includes Spanish words sprinkled throughout the story.

Tree in the Trail by Holling C. Holling is a longer picture book that tells the history of the Southwest and also the the Great Plains region as told by what passes by a cottonwood tree over the course of 300 years. It includes Coronado's search for gold, the establishment of New Mexico, the native Americans and trailblazers who passed the region, along with the pioneers on the Santa Fe Trail.

The Dirty Cowboy by Adam Rex is a humorous tall tale that takes place in New Mexico and is about a cowboy taking his annual bath in El Rio. Afterward, his dog doesn't recognize him, so he must wrestle his dog for his clothing.

Caves and Caverns by Gail Gibbons is a factual picture book about caves and caverns. It includes Carlsbad Cavern.

Loco Dog in the Santa Fe Rail Yard (Historical New Mexico for Children) and Loco Dog and Tom both by Marcy Heller tell the true story of a rail yard dog who saves lives during a blizzard in Raton, New Mexico in 1910.

Paloma and the Dust Devil at the Balloon Festival (Historical New Mexico for Children) by Marcy Heller is about how a dust devil interrupts a girl's dream of riding in a hot air balloon during the Balloon Festival in Albuquerque. Her ancestors mysteriously come to her rescue.

Our Favorite Board Book for Preschoolers, Toddlers, and Babies 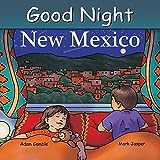 Good Night New Mexico (Good Night Our World)
This is an excellent 20 page board book that goes through some of the famous sites of New Mexico. Each page has 1 sentence and includes nice illustrations that are perfect for young listeners. It includes desert animals, Carlsbad Caverns, White Sands, the Gila Cliff Dwellings, the International UFO Museum, hot air ballooning, and more.
Buy Now

...And Now Miguel
(256 pages) This is a Newbery Medal Winner that follows a 12 year old boy living in Taos as he longs to go with the men of his family to drive sheep to the mountains. After he prays to the patron saint, his prayer is answered -- and he discovers the job is much more difficult than he had anticipated.
Buy Now

Josefina's Story Collection by Valerie Tripp is part of the American Girls Collection that follows the daily life of a 9 year old Hispanic girl as she grows up on a large rancho in New Mexico in 1824.

Sing Down the Moon by Scott O'Dell (144 pages) is a Newbery Honor Book is about the life of a 14 year old Navajo girl who was captured by the Spanish and forced to become a slave in the 1860's.

The Day It Snowed Tortillas / El Dia Que Nevaron Tortillas, Folktales told in Spanish and English by Joe Hayes (144 pages) is a compilation of New Mexican folktales that are told in both English and Spanish.

Our Favorite Free Worksheets and Lapbook Pages on New Mexico

The History Channel's The States Documentary (New Mexico starts at 25:01.)

Have You Visited New Mexico Yet?

Where is Santa Fe, the capital of New Mexico? 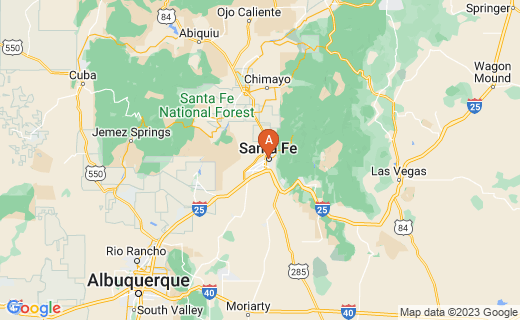