Looking for great YouTube video clips, books, and free worksheets and lapbooks for teaching and/or learning about President Andrew Jackson? Here you will find my favorite picks we used while studying the individual Presidents of the United States. This is part of a series of lessons I posted on individual Presidents. You can find links to all the lessons at President's Day Unit Study .

Do You Think Andrew Jackson Was a Good President?

Just the Facts on Our 7th President

We found these to be helpful when creating a notebook, lapbook, and cooking project on President Andrew Jackson.

Presidents Lapbook provides free lapbook pages for each of the Presidents of the United States.

Presidential Statistics and Points of Interest includes an overview of Andrew Jackson's life and some fun points of interest.

Andrew Jackson (Getting to Know the U.S. Presidents)
This picture book does a nice job of giving a biography of Jackson's life, including a large section on his time as president. It has fun illustrations to keep the attention of even my younger children, and my older children love the humorous illustrations.
Buy Now
Click thumbnail to view full-size

More of Our Favorite Picture Books on Andrew Jackson

Who Let Muddy Boots into the White House?: A Story of Andrew Jackson by Robert Quackenbush was our second favorite picture book on Andrew Jackson. It is a longer picture book but the author pulls out interesting tidbits about Jackson and presents it in an interesting manner. Trail of Tears (Step-Into-Reading, Step 5) by Joseph Bruchac was our favorite book on the Trail of Tears. It has nice illustrations and the perfect amount of information so that my children (ages 2-10) could enjoy sitting through this book and learning from it. While the Trail of Tears of 1838 did not occur while Jackson was president, it was a direct result of his presidency. Andrew Jackson: Frontier Patriot (Easy Biographies) by Louis Sabin is a good longer picture book that provides biographical information in an engaging manner. It has black and white illustrations. How To Draw The Life And Times Of Andrew Jackson (Kid's Guide to Drawing the Presidents of the United States of America) by Melody S. Mis is part of a great series that combines the Presidents of the United States with art. Even my 6 year old could follow the drawing directions and my 9 year old created some impressive drawings while learning more about Andrew Jackson and the main events that occurred during his life. 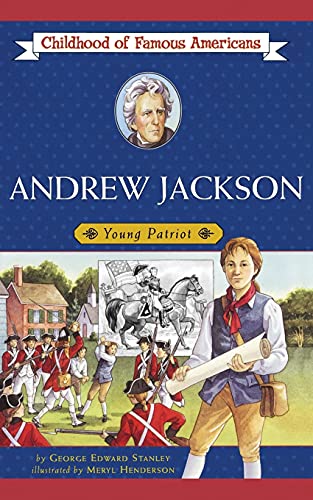 Andrew Jackson
We love the Childhood of Famous Americans series that focuses on the childhood of Jackson and brings out events that molded his character. This is best for children in grades 2-4. It has about 200 pages and includes black and white illustrations every few pages.
Buy Now
Click thumbnail to view full-size

1835
America is debt free for the only time in history, largely due to the work done by John Q. Adams

1837
Michigan admitted as the 26th State

In the 1828 presidential election, Jackson's opponents referred to him as a jackass. He readily adopted the image, and eventually through the political cartoons of Thomas Nast, the jackass became the symbol of the democratic party.

Immediately following his election as president, Jackson rewarded his supporters by granting government jobs to almost 2,000 of them. He also set up a "kitchen cabinet" of informal advisers, some of whom did not have experience in the areas in which they were advising him.

In 1832 Andrew Jackson vetoed the rechartering of the Second Bank of the US because he insisted it only benefited the "elite circle." Eventually this led to the Panic of 1837 and a national depression.

Andrew Jackson's presidency became known as Jacksonian Democracy which was characterized by the empowerment of the common man. All white men (no just land owners) were granted the right to vote. The spirit of Manifest Destiny dictated that America needed to take over the West. Patronage, rewarding political supporters with jobs, became the political norm. Jackson favored a limited national government (strict constructionism and laissez-faire economics). He opposed banks and paper money and favored using silver and gold.

Throughout his presidency Jackson supported Indian Removal Acts, which included the removal of the Cherokees in 1828 resulting in over 4,000 deaths along the "Trail of Tears."