Did you know that Hawaii had Kings and Queens? I did not know they did until my intuition and a past life regression brought me to discover this. I proceeded to look up what had come to me intuitively and found out that indeed there was a princess in the 1800's in Hawaii. Of course Kaiulani (pronounced by those who knew her Kay-oo-lani). She actually lived in Europe for many years, still Hawaii was where her heart was.

She was known as the heart of the people and the hope of the nation.


Born on October 16, 1875 during the reign of King Kalakaua, Victoria Kaiulani Kalaninuiahilapalapa Kawekiui Lunalilo was named for England’s Queen Victoria, a longtime friend to Hawaiian royalty. Her mother was Princess Miriam Likelike, sister to Kalakaua. Her father was Scottish-born Archibald Cleghorn, one-time governor of Oahu.

A poem for Kaiulani

Forth from her land to mine she goes, The Island maid, the Island rose, Light of heart and bright of face, The daughter of a double race. Her Islands here in southern sun Shall mourn their Kaiulani gone. And I, in her dear banyan's shade, Look vainly for the little maid. But our Scots Islands far away Shall glitter with unwonted day, And cast for once their tempest by To smile in Kaiulani's eye. ~Robert Louis Stevenson

Want to know more about this princess 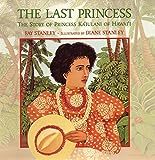 The Last Princess : The Story of Princess Ka'iulani of Hawai'i
Buy Now

"I must have been born under an unlucky star,

as I seem to have my life planned out for me

in such a way that I cannot alter it..."

Have you ever heard of Princess Kaiulani?

Kaiulani was sent away to England to further her education. During her absence, the Hawaii's monarchy fell on troubled times, including the unexpected death of King Kalakaua in 1891. His sister, Liliuokalani, ascended the throne as Hawaii's queen. Among her first acts was naming Kaiulani as her heir apparent.

Kaiulani wanted to return home, but the queen would not permit it. So the princess bided her time in England, attending royal balls, theatrical events and other social functions. Tall, slim and beautiful, Kaiulani captured the hearts of all who met her.

When she returned to the Islands in 1897, her homeland was already a much different place. Liliuokalani had been forced to abdicate her throne four years earlier, and the monarchy was no more. Instead, Hawaii was about to be named a republic by U.S. President William McKinley.

At birth, Kaiulani was given an estate in Waikiki by Princess Ruth Keelikolani, the last surviving member of the Kamehamehas. Called Ainahau, the estate was near the ocean and surrounded by trees and flowers. Peacocks strutted amongst the ponds and footpaths. As a child, Kaiulani spent many hours riding her white pony.

When she was 13, the princess met poet Robert Louis Stevenson, who had moved into the residence next door. The two became fast friends, with the famed writer mesmerizing Kaiulani with intriguing tales as they sat in the garden.

"I must have been born under an unlucky star," said Kaiulani, "as I seem to have my life planned for me in such a way that I cannot alter it." Months later, while horseback riding on the Big Island, she was caught in a rainstorm and fell ill. The cold lingered for months. Finally, on March 6, 1899, Kaiulani died. She was only 23.