On July 8 1947 something strange fell out of the sky and crashed in the middle of the desert on a farm near Roswell New Mexico leaving scattered wreckage .So began one of the greatest extraterrestrial myths and conspiracies theories of all time. The first person to arrive at the scene was a ranch foreman he was the first to see the material and he proceeded to inform the local sheriff who then alerted the Roswell Army Air Field. Major Jesse Mercel an intelligence officer at the base was sent to find out what happened. When he reached the scene he found wreckage with shiny pieces of material including pieces of rubber and tin foil .He also noticed strange symbols written on the inner surface of beams which he thought at first were Egyptian hieroglyphics. Almost immediately a local news paper The Roswell Daily Record announced the crash and capture of a Flying Saucer This article was based on a press release issued by the Roswell Army Field public information officer Walter Haut stating that personnel from the fields 509th Operations Group had recovered a ‘Flying Disk’ which had crashed on a ranch near Roswell. Later that day the statement changed this time round the Air Force stated that they had found a weather balloon that belonged to a secret program called mogul. The air force proceeded to hold a press conference showing material from the crash site which included pieces of wood rubber and foil.

The incident was forgotten by most people and disappeared into history for around 30 years until in 1978 a physicist Stanton T Friedman interviewed Major Jessie Marcel who took part in the recovery of material from the crash site .Stanton is what one might call a professional ufologist he has worked for many major US companies as a researcher into advance classified project s such as fission and fusion rockets , compact nuclear power plants and nuclear powered aircraft .In the 1970’s he left employment to engage in the scientific investigation of UFO’s .Stanton was the first civilian to document the site of the Roswell incident and he believes it was the site of a real crash landing by an extraterrestrial vehicle of some kind . While being interviewed Marcel made a sensational allegation and that was that the United States Federal Government and its military industrial complex were engaging in a massive cover up of the existence of extraterrestrials. He said that the debris recovered on that day in Roswell was ‘‘not of this world’’ .In later interviews Marcel even claimed that the military recovered alien bodies from the crash scene some of who were still alive. After Marcel other eyewitnesses appeared on the scene each claiming his own bizarre narration of events most of which contradicted each other.

In 1992 Friedman wrote another book with new allegations revolving around a mysterious secret quasi government organisation called majestic. This book his third book was titled Crash at Corona in it he suggests that there is a high level government cover up. He based his allegations on secret documents that were anonymously dropped at his house by unknown persons. The contents of these documents were briefs dated from the year 1952 to then incoming President Dwight Eisenhower informing him in detail about a government organisation whose sole purpose was to investigate encounters with extraterrestrials, the Roswell incident in particular and to keep all details and information from public knowledge. Freidman was not the only investigator in the field another famous pair of ufologist like Friedman called Kevin Randle and Don Schmitt have also spent a lot of time snooping around Roswell looking for leads .They wrote a book in 1991 called The UFO crash at Roswell. That book claimed that alien bodies were recovered at a site 2 and half miles from where crash site took place. The two ufologists continued their research even after finishing their first book. They met retired military personnel who claimed to have been involved in the removal of alien bodies.

Do You Believe an Alien Spacecraft crash landed at Roswell ?

In response to these reports the U.S air force issued two reports which accounted for the crash debris that was found in 1947. The US air force explained that the debris came from a top secret government project called project Mogul which was testing the possibility of detecting soviet nuclear test and missile launches. The accounts of aliens were explained by the fact that the military used to use human like dummies in their experiments. This however did not convince the conspiracy theorists

The Roswell legend has spawned an industry despite government denials people still believe that something happened out there in the desert something out of this world. Roswell New Mexico now has more than three competing UFO museums that get over one hundred thousand tourists every year. Maybe some day hopefully soon we will know the truth that we are not alone in this universe.

25 Things to Do in Roswell , New Mexico 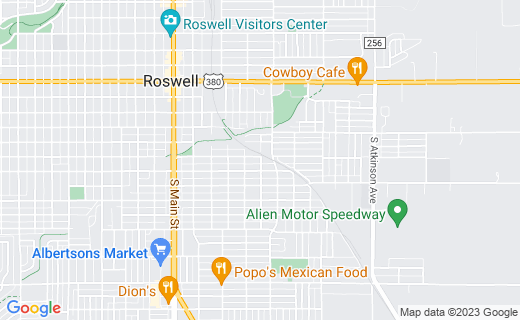