I wouldn't be surprised if you've never heard of Prince Eddy. Over the years, his existence has been virtually ignored. He has been largely thought of as homosexual and his mental capacity has been questioned. People are aware of his brother who overshadowed him but poor Eddy has disappeared into obscurity. Why is this?

The record should be set straight. Eddy's story is besmirched by scandal but within his story there are tragedies, disasters and - naturally - conspiracy theories. Read on.

Much of what has been written about him is largely conjecture - plus people putting two and two together and coming up with at least five. A simple whiff of unproven scandal has been grasped and turned into so-called fact.

All images are copyright-free and available from Wikimedia Commons..

His grandmother was the Queen of England. His parents were the Prince and Princess of Wales. Born as Albert (named after his grandfather) he was always known in the family as 'Eddy'.

He was born in 1864 and had a younger brother, George. In many ways, Eddy and George were in similar circumstances to those of Princes William and Harry today - children of the heir to the British throne and second and third in the line of succession. Their grandmother, Victoria, had been on the throne for many years; a similar situation to that of Queen Elizabeth today.

Their grandmother Victoria decided that the two boys should be educated by a private tutor. The tutor complained bitterly about his two charges, declaring them - and Eddy in particular - to be almost unteachable. Of course, it may well have been that his teaching wasn't up to scratch - this was before the days of teacher-training and the tutor was a university-educated curate.

However, mud sticks and it was generally believed that Eddy was something of a dunce.

There are those who believe that our present Queen was unnecessarily cruel when she sent her children to boarding school (actually quite a common practice in the UK). But that was nothing compared to what happened to the Victorian princes.

They were sent on a three-year training course as naval cadets on a world tour, The boys were in their early teens and therefore accompanied by their stern tutor.

Touring the countries that were part of the British Empire, the two boys became incredibly popular. (Shades of William and Harry?)

Eddy then spent some time at Cambridge University and then became an officer in the army. This was a royal tradition that survives to this day. 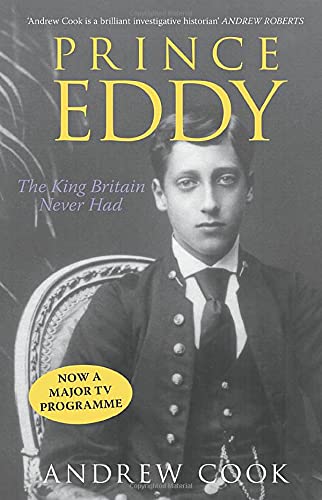 Prince Eddy
The information on this page is largely from the book you see here. The author, a respected historian, spent some considerable time delving into the history of this royal who had almost been wiped from history. The royal family destroyed all Eddy's papers after his death but the author tracked down letters that Eddy had written to, amongst others, his cousin Louis. These, and other revelations, showed Eddy in a completely different light. Totally fascinating.
Buy Now

There were two distinct moralities in Victorian times. The Queen and many people from the upper and middle classes insisted on correctness and gentility. But they knew that another world existed, particularly in London which included prostitution, violence, drunkenness, drugs and homosexuality. (The latter being illegal in the UK at the time).

In the 1880s, police discovered a brothel - one where young men, mostly employees of the postal services - sold their bodies to other men. Many of the clients were from the upper echelons of society and one such was an equerry of the Prince of Wales, Eddy's father.

It was strongly implied at the time that Eddy too was a client. It was pointed out that some of his friends at university were homosexual and, in those days as much as today, 'there's no smoke without fire.

There was never even the slenderest evidence that the prince was involved. It only took the suggestion of one society client to suggest that the case be dropped because a 'noble person' could be implicated, and that was it. Mud stuck.

The search for a bride

Eddy's father, the Prince of Wales, had been similarly involved in sexual scandals as a young man and Queen Victoria decided that he needed to marry. (See the links below). She adopted the same attitude towards Eddy.

Eddy's letters to his cousin, and other friends, show that he was crazily in love with the girl you see here - Princess Alix of Hesse. They developed a friendship but his advances were ultimately spurned. Alix married Eddy's cousin, Tsar Nicholas of Russia. (In doing so, she signed her death warrant as Nicholas and Alix, along with their children, were massacred during the Russian revolution.)

Eddy next fell in love with a French princess, Helene. This seems to be a love match and she returned his affections. However, she was a Catholic and as such, unsuitable. Eddy would be king one day and a Catholic queen on the British throne was unthinkable.

They appealed to Queen Victoria. Eddy declared that he would renounce his throne to marry Helene. She said that she would convert from Catholicism. Victoria is often portrayed as a strict, uncaring woman but her heart melted when she realised the couples' devotion and gave her permission for them to marry.

Helene's father however, would not agree. Once again, Eddy had lost a true love.

Eddy had a short period of ill-health but soon recovered. But because his reputation was badly tarnished, it was whispered by some that he had a venereal disease.

Meanwhile, Queen Victoria trawled the pool of European royal princesses until she came across Mary of Teck. (Just look at that tiny waist). Whether this was a genuine love match, I don't know but Eddy proposed to her and was accepted.

A wedding date was set.

The Eddy fell ill again. This time there was no mistaking his illness - he had fallen victim to the serious, life-threatening flu epidemic that was blazing through Europe. This developed into pneumonia.

Just two weeks before he was due to marry, Prince Eddy died at the age of twenty-eight.

During the prince's illness, crowds had gathered, anxious for news of the man who would one day be king. When he died, the public genuinely mourned his death. The press wrote glowing reports of this young man and despaired of his early, tragic death.

The Prince and Princess of Wales were distraught.

His younger brother George (on the right in the photograph) married Eddy's fianceé Mary and when his father, the Prince of Wales became king, George became second in line to the throne.

George's father died in 1910 and George became King George Vl. He and Mary had six children. The eldest was Edward who, when he became king abdicated for the love of Wallis Simpson - and George who became George Vl and was the father of the present queen.

Well, there had to be one. Unusually though, this conspiracy theory was developed many years after Eddy's death - in the nineteen sixties.

Almost everyone has heard about the Victorian Whitechapel murders. The murderer was never found but was referred to as Jack the Ripper. There were many theories about who he was but because of the precise nature of the victims' mutilation, it was suggested that the murderer had surgical knowledge.

In the 1960s, a sensationalist theory developed that in fact, Eddy had been Jack the Ripper.

The 'evidence'? Simply that because of his hunting activities during his early life, the prince had ample opportunity to study animals' organs being removed. Yep, that's the 'evidence'.

Yet the story took hold and there are many people today who will say that the murderer was a member of the royal family.

Prince Eddy and the Homosexual Underworld
Was Prince Eddy a homosexual? Was he mentally deficient? He was involved in plenty of scandals and I've only been able to give an outline on this page. Learn more.
Buy Now

The Victorian era is largely misunderstood. Many people believe that it was a time of strict morality. The fact is that Queen Victoria and her husband Albert deliberately set out to to create a moral and respectable morality, hoping this would clean up the entire country.

Alfred: Queen Victoria's second son
This is a fascinating book that takes you behind the scenes. What really happened in those days?
Buy Now

The Heir Apparent: A Life of Edward VII, the Playboy Prince
Find out more about the British royal family in days gone by. Believe me, they were far more scandalous in the past. The difference was they they weren't subjected to the press and the internet.
Buy Now