Sea Cucumbers are interesting creatures. Yup, they are animals, and not plants or--as their name might imply--vegetables.

Sea cucumbers are relatives of the starfish and sea urchins, of the phylum Echinodermata--Echinoderms have radiating parts--and are also known as Holothurids of the Class Holothuroidea. Although they occur in almost any of the world's oceans, they are extremely common in tropical areas--particularly on the coral reef flats.

And they come in all shapes and sizes (and COLORS)!

Although most folks will be familiar with the common black or brown sea cucumber as shown in the picture in this module, you will learn that sea cucumbers can look like decorative pillows such as the candy-striped specimen and the multi-tufted specimen shown elsewhere on this website. Depending on which marine biology expert you talk to, there are about 1300 known species, and you can find the sea cucumber living in all of the world's oceans.

Sea Cucumbers are bottom dwellers--and eat whatever small things they can filter through their tentacles and mouth in the water and sand near the sea floor. They eat organic material--whether planktonic plant or animal life, bits of broken coral, bits of broken seaweed, fish and marine animal excrement, and so on. They pass this stuff through their bodies and excrete the essentially turned sand, acting much in the same way that terrestrial earthworms digest and process the organic materials in the soil.

This website relates my experiences with these critters and provides links to more resources and references you can get to further your studies!

Catch Up on Sea Cucumbers! ... Not that they are fast or anything like that.. - Maybe fast reading, but not a fast subject! 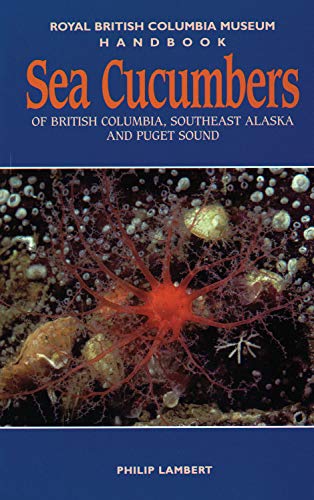 Sea Cucumbers of British Columbia, Southeast Alaska and Puget Sound (Royal BC Museum Handbook)
A Field Guide to Sea Cucumbers? If you're on a beach or oceanside of the Pacific Northwest and you see a sea cucumber, this book may help you to identify it. (You might even be able to identify a sea cucumber if you are somewhere else.) Get your copy now!
Buy Now

Rise, Ye Sea Slugs!
Poems (actually Haiku) to the Sea Slugs (Sea Cucumbers)! A poetic approach to everything holothurid... everything you want to know about sea slugs or sea cucumbers presented in a poetic way--in haiku. Stimulate that poet in you -- get your copy now.
Buy Now

Believe it or not, you can eat many of the varieties of sea cucumbers! Most commonly, you can find sea cucumbers on the menus at Chinese Restaurants--although it may be listed somewhat subtly in the "translation" of the menu.

It may be called "Beche-de-Mer" or "Trepang". Sometimes it will be chopped and cooked in sauce with other seafood such that you wouldn't recognize it as being "something different". Other times, it will definitely look like "something different" on your plate of noodles!

Want Some Sea Cucumbers of Your Own? But Don't Want to Dig 'Em Out of the Beach? 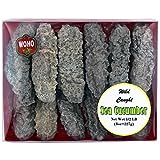 Side View of a Sea Cucumber in Holding Tank, University of Guam Marine Laboratory, Mangilao, Guam

Not the Best Things You Can Put In Your Aquarium. Or Pick Up, For That Matter!

Sea cucumbers have some quirky habits

One of these habits is their urge to spill their guts whenever you bother them, try to pick them up, or piss them off. They call this evisceration. When this happens, a toxin is released that kills fish. If this happens in your aquarium, consider all the other critters in your aquarium dead.

However, even though this danger exists, the sea cucumbers (also known as "cukes" among certain beach-goers) are hosts to a fish called a "pearl-fish" that lives inside the sea cucumber. The fish protects its host, and at the same time, the cucumber provides a formidable protective home for the fish in a sort of delicate balance.

It Takes Guts to Do This! (Sea Cucumber Guts, That Is!)

Oh, there are other purposes to get sea cucumbers to spew their guts -- and one of those used by many Pacific Islanders when they find themselves stranded on a reef is to make "instant tennis shoes". They step on a few sea cucumbers and get them to spew their guts, and then wrap their feet with those sticky, rubbery-texture "guts" ... this layer of rubbery and sticky stuff acts like a natural barrier to the sharp coral that is also prevalent on a coral reef. When the islanders get to shore, they just peel off the sticky guts and continue enjoying the sand on the beach!

NOTE: All photographic images in this website, with exception of those obviously in the Amazon, eBay, CafePress, YouTube, and similar sections, were shot on my own camera by me and are thus mine. Likewise, the narrative is original and based on my experiences. Your mileage may vary.

Drop a Note and Say Hi!