Secret Societies are associations whose existence, membership, purpose, or ritual is not revealed to nonmembers. The degree of secrecy varies widely, from organizations in which all except ritual is public, to clandestine groups whose very existence is only suspected. Although not universal, secret societies are found in many countries and among both primitive and civilized peoples.

In the ancient world, secret societies were chiefly religious, or at least professedly so, but in ancient times religious and temporal power were so closely associated that it was difficult, if not impossible, to draw a dividing line. There were the mystery cults of Osiris and Serapis in Egypt, of Orpheus and Dionysus in Greece, of Cybele of Phrygia, and of Mithras in Persia. All tended to surround the worship of the gods with elements of secrecy and awe, and helped to keep the ignorant masses in submission to the hierarchy and all that it represented.

In the Middle Ages, secret societies often resorted to repression in their exercise of power. The secret courts of Westphalia were virtually vigilante committees, bound to secrecy by the nature of their objectives. In more recent times, politics, religion, crime, and a desire for fraternal association have all inspired the creation of secret societies.

All primitive societies use secret symbolic acts to test the novice psychologically or physically. The societies conduct initiation rites and rituals that stress the traditions of the organization. The ritual is designed to give the initiates a sense of passing from an inferior to a superior status, often with a feeling of psychological rebirth. Secrecy gives both prestige and social solidarity to members, but such secrecy must be enforced, either by oath or by threats of penalties for divulging the secret.

In addition to such rites of passage as the initiation into manhood, which all boys in a primitive society shared and which was involuntary, many preliterate tribes have had secret societies of the more restrictive type. These differ widely in purpose according to region. Among Indians of the northwest coast of North America, membership was limited to men of noble birth. Among the Pueblo Indians, on the other hand, every man belonged to some society. The dances were public, and the societies sought to promote the welfare of the whole community. In Melanesia a man often joined several societies. The emblems gave insurance against theft of property, and membership in some restricted societies raised a person's rank in the tribal councils. Here, as in many societies, members advanced through a series of grades, and only a few achieved the highest levels.

Secret societies of specific criminal intent have included the Mafia and Camorra in Italy, the Thugs in India, and the Brotherhood of the Beggars in 16th and 17th century England. In the United States a transplanted Mafia and a secret mob known as Murder Incorporated appeared. In the 19th century, the Molly Maguires, a society of the Pennsylvania coal regions that engaged in acts of terrorism and murder, was suppressed by the state and its leaders were executed.

The secret societies that arose in the 19th and 20th centuries have been chiefly political and benevolent. The struggle for freedom in Italy gave birth to powerful secret organizations that continued to exist after Italian unity had been gained, and they caused considerable anxiety to the authorities. Ireland has also had a large number of secret political societies, including the United Irishmen, the Fenians, and the Irish Republican Army. In Russia, members of a revolutionary society known as the People's Will assassinated Alexander II in 1881, and was an ever-present menace to autocratic government.

Secret societies formed specifically for political action tend to disappear when the crisis ends. In this category would fall the Jacobins of the French Revolution, the Omladina in the Balkans, the Mau Mau and the Red Hand in Africa, and the Land and Liberty in czarist Russia.

In the United States, the Ku Klux Klan, which first flourished in the South after the Civil War, had political objectives, principally to remove Negroes from public offices and to restore white rule. During a revival in the 1920's, the Klan placed greater emphasis on the religious aspect of its philosophy, opposing Catholics, Jews, and the foreign-born. Notorious for its acts of terrorism, the Klan kept its membership secret, and Klansmen appeared in public dressed in full-length white robes and face masks.

The only political party in the United States with a fetish for secrecy was the American party. Its members were popularly known as "Know-Nothings" because they professed ignorance when asked about the organization. The party, rooted in anti-Catholic sentiment, flourished in the 1850's.

Most secret societies are partly religious in origin, but often acquire secular attributes. In western Africa, the high priests of the tribal men's and women's societies are more powerful than political chiefs and in effect control the government. In China in 1900, the Boxers and other secret societies led the Boxer Rebellion against Europeans. The White Lotus Society, founded in the 4th century by a Buddhist with Manichaean leanings, worked for the downfall of the Sui, Yuan, and Ming dynasties, and was active in the T'ai-p'ing Rebellion in the mid-19th century.

In the Middle East, the Assassins, a secret order of the Ismailite sect of Muslims, attained political power in the late Middle Ages by terrorist killings of their enemies and emerged in the 19th century as the respectable Ismaili sect under Aga Khan I. The Knights Templar, formed as a religious and military order to fight the Saracens, became wealthy through business dealings with the enemy. Similarly, the Spanish Garduna, founded by Christian refugees to drive out the Moors, came to terrorize Christians as well as Moors and Jews for the sake of plunder. 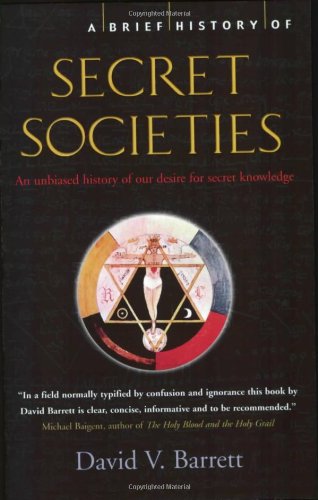 A Brief History of Secret Societies: An unbiased history of our desire for secret knowledge
Buy Now

Certain societies function with a moderate amount of secrecy, usually limited to initiation, special rites, and signs of recognition. These are essentially fraternal organizations that emphasize good fellowship, mutual aid, or philanthropy. Among names well known internationally are the Masonic Order, with origins that traditionally date back at least to the time of King Solomon; the Independent Order of Odd Fellows; the Knights of Columbus; and the Ancient Order of Hibernians.

College fraternities and sororities, most of them designated by Greek letters, are also regarded as secret societies.