Thales (634 B.C. to 546 B.C.) was the first known Greek philosopher and scientist. Traditionally known as the father of philosophy, he also invented theoretical geometry and abstract astronomy and was the first of the Seven Sages of Greece. It is not known where Thales was born, but his parents were Greek and he was a citizen of Miletus in Asia Minor. He was educated during an early sojourn in Egypt, where he calculated the heights of various pyramids.

Although most ancient authors asserted that Thales had not committed his scientific and philosophical principles to writing, even in antiquity at least four treatises were ascribed to him: Nautical Astronomy, On Beginnings, On the Solstice, and On the Equinox, These works have been lost, however, and all that remain are their titles. Whatever Thales taught was transmitted in oral tradition until Greek scholars collected doctrines and aphorisms attributed to him and anecdotes related about him. 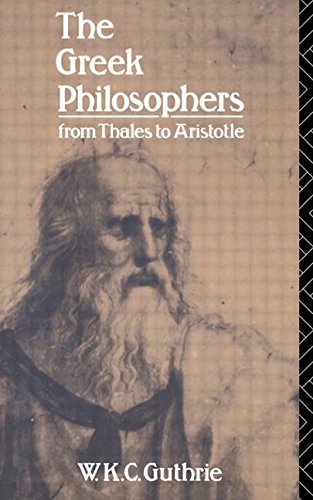 The Greek Philosophers: From Thales to Aristotle (Up)
Buy Now

In mathematics, Thales first demonstrated that a circle is bisected by its diameter, that the angles at the base of an isosceles triangle are equal, that two intersecting straight lines produce opposite and equal angles, and that the angle of a semicircle is a right angle. In astronomy Thales was the first to determine the sun's course from solstice to solstice and to estimate, with reasonable accuracy, the size of the sun and of the moon in relation, respectively, to the solar and lunar circles. His greatest achievement in this area was his prediction, within a year, of the total eclipse of the sun on May 28, 585 B.C.

Thales was the founder of the Ionian school of philosophy, which was chiefly concerned with understanding the physical universe. Thales himself taught that water is the universal primary substance; all comes from water and to water all returns. This proposition he supplemented with the statement that the earth is a flat disk that floats on water. No ancient explanation of his doctrine of the formation of the universe exists, but Aristotle provides a probable conjecture on how Thales selected water as the one primal kind of existence. According to Aristotle, Thales probably derived his opinion from observing that the nutrient of everything is moist, that even actual heat is generated from moisture, that water sustains animal life, that the seeds of all things have a moist nature, and that water is a first principle of all things that are humid.

It may be asked why such a crude idea should suffice to confer on Thales the title of father of philosophy. The significance is not that his teaching about water has any intrinsic value, but that his speculation is the earliest recorded attempt to explain the universe on naturalistic principles. Even more significant is that Thales not only propounded the problem of the nature of the primal principle from which all things have emanated, but that he also, in seeking to find a single ultimate principle underlying the multiplicity of natural phenomena, determined the direction as well as the character of Greek philosophy until the mid-5th century B.C. At that time the Sophists began to discard cos-mological investigation and to shift the emphasis in philosophy to ethical speculation concerning man's place in the world, human life and conduct, and man's nature as a political animal.