The Future of Education - A Cloud of Grandmothers?

My early interest in science led me to a BSc in Life Sciences from Liverpool University, then an MSc in Health Psychology from Southampton

.... like a host of angels, though it could be. You've no doubt heard of cloud computing, well, a cloud of grandmothers can in much the same way help children learn, all around the world.

Do you know the grandmother method? I'm one myself and it's simple: you stand behind the children, admire them and praise them, give them encouragement. Grandmothers do this all the time and now the same grandmothers can (and do) admire and encourage children in India, Columbia and around the world, to help children learn. And the internet allows this to happen.

The research behind this "minimally invasive education" has been done by Professor Sugata Mitra from Newcastle University. If you want to know all about the project, do please watch the video. Even though it is, I admit, quite long I'm sure you will find it as fascinating and inspiring as I did. Professor Mitra is a great and entertaining speaker.

There are places on earth in every country where, for various reasons, good schools cannot be built and good teachers cannot or do not want to go there. If they can't get teachers and if the children want to learn, they have to teach themselves.

Professor Mitra's video explains how some people are hoping to find ways of getting over this problem and to level the playing field between those who have all the teaching they need and the others who have no specialist teachers.

Have you seen "Slumdog Millionaire", or read the book? The book was originally called "Q & A" but I wasn't aware of it until after the film was made. I did see the film, although on television, and was completely bowled over by it, so much so that I've been happy to see it more than once. I found the story inspiring but my point here is that the author, Vikas Swarup, was inspired by Sugata Mitra's project, the Hole in the Wall.

In this project, Professor Mitra had a computer built into a wall in a slum area of Delhi and left it for the slum children to use as they wanted, unsupervised. Although the children had no experience of computers, they taught themselves the basic skills needed to use the internet. They learnt enough English to use search engines and send emails.

In a later project, Professor Mitra left a computer at a school with a group of children who could speak English but with a very strong accent. The computer was voice activated but would recognise only a standard English accent. The children were told to work out how to use it and then Professor Mitra left. Two months later the children had learnt to speak English with a standard accent to be able to use the computer.

The stories go on. Another group had taught themselves biotechnology - alone. When a mentor was there to guide them, just using the grandmother techniques, they learnt even more. 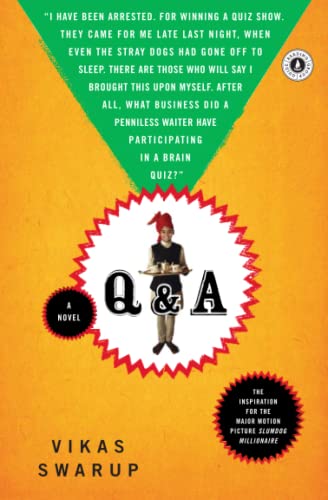 Q & A: A Novel
The author of this book was inspired by hearing the story behind the cloud of grandmothers. In turn it inspired the film "Slumdog Millionaire" though many people think Q&A is better than Slumdog Millionaire.
Buy Now

The latest project moves on from the earlier project because the children clearly did best when given encouragement by an adult. As a result, Professor Mitra decided to set up Self Organising Learning Environments, or the granny cloud, otherwise known as e-mediators. They aren't teachers, they don't give lessons, and it has to be said, they aren't all grandmothers.

What they do is, they talk to the children, they read to them, they tell them things about daily life. Any problems they had at the start of the project are now being overcome and the scheme is expanding with plans (sometime, maybe) to work on a global scale.

How You Can Help

I have been inspired learning about the project and I intend to volunteer my time, but the sad thing is, they don't have enough money. The old, old story. Money is not the only thing, though: they also need engineers to help design the product.

Most recently in his 2013 TED talk Professor Mitra asked people all over the world to set up a SOLE (Self Organised Learning Environment) and give children a problem to solve. You can find out a lot more at The School in the Cloud and how to become involved.

Afterwards he hopes you will share your feedback with him to help him in his study of the future of learning, the School in the Cloud.

Children have to be educated, but they have also to be left to educate themselves. ~ Ernest Dimnet

Education is not the filling of a pail, but the lighting of a fire. ~ William Butler Yeats

Education's purpose is to replace an empty mind with an open one. ~ Malcolm Forbes

What is a SOLE?

Just before I finish, you might like to read about how It Takes a Village to Raise a SOLE in an American school. It just goes to show how the method of learning can be used anywhere. Oh, and while you're there, you could also visit any one of a number of fascinating reports on the site's blog.