The Triangle Fire: Death in Manhattan

The tragic fire at the Triangle Shirtwaist Factory

It was a Saturday afternoon in March 1911 when the firefighters that you see in the photograph above raced through Manhattan to the Triangle Shirtwaist Factory. Thirty five fire vehicles dashed through the streets in haste.

The factory, making ladies' blouses, was housed in a ten-storey building and employed hundreds of mostly young and teenage immigrant women and girls.

Fire had broken out on the eighth floor.

I was recently started reading an excellent novel set in Manhattan in the early years of the twentieth century. I was only on the second chapter when one of the fictional characters, a photographer, was described as taking shots of a dreadful fire.

I assumed this was fictional but just in case, I looked it up. Yes, the

Americans probably learned about this tragedy when they were at school - it was an important event in the history of labour laws as well as being such a terrible event. But it was the first I'd heard of it.

Because the fire started on the eighth floor, people on levels below that were able to escape but others were unable to do so because of the terrible practice of the time in factories such as this.

The doors were locked - from the outside.

Think about a garment factory. It was full of highly flammable fabric, trimmings and paper. It's believed that the fire was started by a cigarette butt. Smoking was banned, of course, but employees still took the opportunity when they could.

The fire spread through the building in seconds.

Girls rushed for the doors in panic -  and they panicked even further once they realised that they couldn't escape from their workrooms. As they did, the fire was quickly consuming  the flammable materials. The smoke intensified their horror.

On lower floors they jammed into the elevators to escape but the incredible heat, the fire and quite possibly the fact they they were overloaded meant that after just a few minutes, the elevators refused to budge. Evacuation was swift for the lower floors but two hundred women and young girls remained trapped on the eighth floor and above.

Although the fire fighting appliances had ladders, they were only tall enough to reach the sixth floor of the building.

Horrified crowds gathered, which intensified the horror as they screamed in despair, unable to help.  Word had spread, almost as quickly as the fire itself, and relative and friends of the girls rushed to the scene. Their wails of despair, mostly in Italian and Yiddish added to the horrific scene.

Many on the top floor, the tenth, were lucky in that they were able to escape to the roof. With help from the occupants of the neighbouring buildings, they found safety.

Girls ran to the fire escapes. But like the elevator, they were affected by the heat and the now-instability of the building. Only a handful of girls managed to survive by using the fire escapes.

Others died when the fire escapes collapsed.

By now, the fire was advancing on the girls and survivors described how they saw their friends' clothing catch alight followed by watching them disappearing into the smoke amid screams.

The surviving girls had nowhere to go except the windows.

The atmosphere in the crowd intensified as they realised that the girls had nowhere to go to escape painful death by fire - except through the windows. The firefighters remained helpless with their ladders that were two or more stories too short.

An eyewitness later described how he saw what he believed was  bundle of cloth thrown from one of the windows, burning as it fell.

One hundred and forty six people, the majority being young women, died. The youngest were two fourteen year olds.

Two years before the tragic events of 1911, the factory workers had been on strike. In addition to better sanitary conditions, they also demanded improvements in safety.

In total, 20,000 women from the garment industry went on strike. They received a great deal of support, particularly from other women in society but nevertheless it was the Triangle Fire that brought about change.

The two owners of the factory were charged with manslaughter. They had both been on the premises at the time of the fire. They were acquitted. A private lawsuit brought later though had them pay compensation to the families - $75 per person. 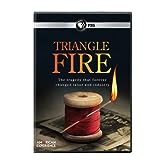 American Experience: Triangle Fire
Once I had discovered the story of this tragedy, I felt obliged to find out more.This PBS television special goes into detail about the labour disputes and the working conditions that immigrant factory workers had to endure.In many immigrant families the teenagers were important breadwinners. Because they had often been in the States since childhood they had, unlike their parents, a better command of the language and were more Americanised.
Buy Now

Although I was horrified when I read the story of the fire, I was pleased to have discovered it. It shows only too well how far our society has come in a hundred years.

Nevertheless, the sight of people jumping from windows to escape fire is something that we have seen in recent times.

The thing that both horrific events have in common is that of innocent people simply going about their daily work. However, the reasons were very different indeed.

If you'd like to learn more about the events of 1911 (how chilling those last three numerals are) then I recommend the DVD and book below. I have included the novel that has a fictionalised version, through which I first heard about this tragedy. 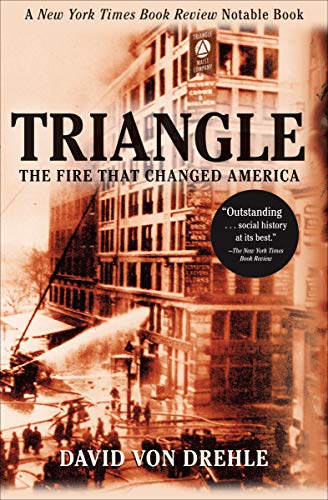 Triangle: The Fire That Changed America
This is seen is being the definitive book on the subject of the Triangle Fire.Interestingly, the author explains that the number of deaths, although horrifying, wasn't the issue that shocked the world. This is because in 1911 America was in the throes of huge industrialisation.It's estimated that, during that time, a hundred people died whilst working every single day in the United States.
Buy Now

One of the benefits of reading novels is that they can often set a train of research in motion. The chances are that I would have never heard of this tragedy if I hadn't read the book below.I highly recommend it.

The Museum of Extraordinary Things: A Novel
This is the novel I was reading when I first discovered the story about the Triangle Fire.I was, of course, hugely distracted by the fire and therefore I'm still reading this book, which I'll be reviewing shortly.But in the meantime, if the first few chapters are anything to go by, this is superb. I'll let you know.
Buy Now

All the images you see above are copyright free and available from Wikimedia Commons,

Comments? I'd love to hear from you.