How Snowflakes Are Formed

Image by Kenneth Libbrecht from AllPoster.com

Do You Know How Snowflakes Are Made?

If you've lived for much time in a colder climate, as I have, then undoubtedly you've been outside during a snowfall.

But have you ever paused to looked closely at the individual snowflakes after they land?

If so, you'll have noticed that their appearance can be different during different snowfalls. Sometimes snow comes down as beautiful tiny, lacy six-sided crystals, and sometimes it comes down in needle-like shapes, columnar shapes, or most commonly as irregular shapes. Often snow will come down as clumps of snow crystals -- that's when we see the big puffy snow flakes.

Snowflakes start out as ice crystals that have formed around small bits of dust or dirt in the atmosphere.

The shapes that they take depend on the weather conditions, such as temperature, humidity (how much water vapor is in the air), wind speed, and how long it takes for them to fall to the ground.

A snowflake is a more general name that can refer to one snow crystal, or a few crystals stuck together, or a large group of snow crystals grouped together as a snowflake puffball. There may be up to a couple hundred snow crystals in one snowflake.

The three images above are the more familiar six-sided snow crystals that we see in drawings and decorative designs. Note the relative simplicity of a couple of those. The four images below are also snow crystals but certainly not what we think of as the "picture book" snowflake. The last one is of irregular snow crystals, which are the most common kind. They're usually clumped together and don't show much symmetry.

The beautiful six-sided flakes are less common, but they're what are most commonly represented because their beauty inspires us.

The snow crystal photos shown above are by Kenneth Libbrecht at SnowCrystals.com and are shared here according to his copyright information page.

A Great Guidebook - by Ken Libbrecht

This is a handy, pocket-sized book that offers tips for snowflake watchers, including what type of snowflakes to expect during certain weather conditions, and suggestions for capturing snowflakes. It includes Libbrecht's own beautiful snowflake micro-photographs (some are shown on this page).

It's a comprehensive and entertaining guide that describes the many types of snowflakes, and what can be learned from their patterns.

Snowflakes form in clouds when the temperature is too cold to form raindrops. Clouds consist of water vapor.

A very tiny ice crystal, or snow crystal, forms from water vapor condensing around a speck of dust or dirt in the atmosphere. As the snow crystal grows and gets heavier, it starts to fall earthward.

Along the way down it will encounter many different environmental conditions -- it may grow more quickly or more slowly, or form different shapes depending on the conditions it goes through. It may also collide and combine with other snow crystals, forming bigger snowflakes.

This is a good interview with Caltech physicist, Kenneth Libbrecht, who is considered the world's preeminent snowflake photographer and researcher. The video talks about his research and shows how he photographs snow crystals. The best areas for photographing is in northern Ontario and around the Great Lakes, including Houghton, Michigan. It's cold work! The best snow crystals are found when the temperatures are 5 - 10 degrees Fahrenheit (-15 to -12 degrees Celsius).

"Nature is full of genius, full of the divinity; so that not a snowflake escapes its fashioning hand."

What Causes Six-Sided Snowflakes to Form?

The six-sided shape comes from the configuration of water molecules, and how they interact with each other in a solid state (ice, snow).

A water molecule (such as above) is made up of two Hydrogen atoms and one Oxygen atom (H2O).

But Are They Perfectly Symmetrical?

Some are pretty close!

It does look like the snowflake below is perfectly symmetrical, doesn't it? But look very closely at the six arms, and you'll notice that each arm is just a little different than the others. It's like the Spot the Difference picture puzzles we looked at as children (and maybe still do!) -- we're shown a couple of drawings that at first glance look the same, but on closer inspection have tiny differences.

Some snow crystals, such as this one, are very nearly visually symmetrical, while others are much more noticeably unsymmetrical.

Image of Needle-shaped snow crystal, above, and morphology diagram below, by Kenneth Libbrecht

What Determines the Shape and Pattern of a Snowflake / Snow Crystal?

The size and shape of a snowflake is determined in part by the temperature, humidity, and air currents in the zones that it falls through. Its formation and growth is dynamic and complex because it will fall through many different zones with different conditions before it lands. In some zones it might sprout dendrites (feathery branches), and in others it might start to melt, only to branch and grow again in different zones.

Snowflakes that spin like a top are more symmetrical than those that fall sideways. The amount of dust or dirt in the flake will affect its shape too.

Temperature is a big influence of the different shapes. At warmer temperatures, the shapes grow more slowly and are usually smoother. At colder temperatures the shapes can be more intricate. But humidity also plays a big part in the growth and shape of a snowflake. Higher humidity allows for more complex patterns.

Image is my creation from Make-a-Flake

Make Your Own Flake

This is an online version of the folded paper snowflakes that you may have made in the past. No little paper scraps to clean up!

First, you'll be taken to a page that says "Flash 6 is required to use Make-a-Flake".

If you don't have the Flash 6 plugin, you'll be able to download it at this time.

A window will open with a few pretty snowflakes floating by.

Click "Make Your Own Snowflake" (or "Visit the Gallery" if you want to see what other people have created.)

A virtual piece of paper will be folded for you. Your mouse controls the scissors. The red dot on the scissors will turn green when the scissors are positioned where you can cut (start from any edge of the triangle). Click the mouse and move the mouse to cut. You can save your flake, or download it or email it.

Be creative! Since there's no paper to waste, you can experiment with different shapes. 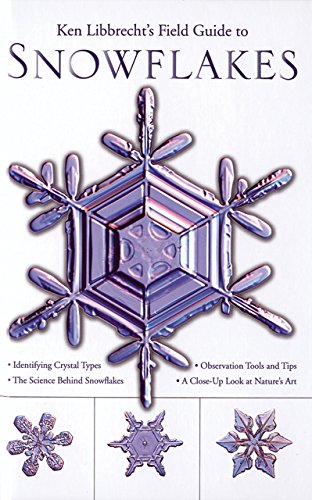 Ken Libbrecht's Field Guide to Snowflakes
From a product description: "A handy, pocket-sized book that offers tips for intrepid snowflake hunters, including what type of snowflakes to expect during certain weather conditions, and opportune ways for capturing them."
Buy Now 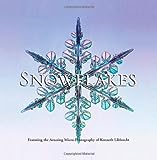 Snowflakes
Product Description A cute giftbook packed with glorious color microphotography of real snow crystals by Dr. Snow-Caltech physicist Kenneth Libbrecht. His photos of snowflakes have appeared in National Geographic, the New York Times, and on Martha Stewart's TV show, as well as numerous other places. This thick "cube" book is packed with a blizzard's worth of amazing images as well as literary quotes on the beauty of snow.
Buy Now

An average raindrop falls about 600 feet a minute.

An average snowflake falls about 11 feet a minute. 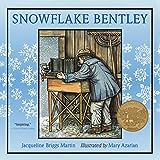 Another Photographer of Snowflakes

The best site I've found to learn more about snow crystals and snowflakes is SnowCrystals.com, by physicist and researcher Kenneth Libbrecht.

And you'll find galleries of beautiful snow crystals there!

Some of the sources I used

Did you learn something new about snow crystal and snowflake formation?