The Hot Dogs released Say What You Mean in October 1973, but I did not discover it until a couple of years later when it became my first album purchase with my own hard earned money. After mowing the lawn for the almost-certainly-below-minimum-wage price of $2.00 -- where were those child labor laws in those days? -- I headed down to the local Clarks Department Store to check out the bargain bin. There I found the album for $1.00 which was the most I could afford as there were taxes to pay and an Iron Man comic still to be bought. Arriving back home with my purchases, I put on the album and settled down to read my new comic book. I didn't get the comic read for at least a week.

Released on the Ardent label and distributed by Stax, the album did not really catch on with the public. The band's easy-going jazzed-up rock style that could be compared to bands like Badfinger and a lighter Big Star with plenty of harmonies and plush instrumentation, always upbeat even when mellow. At the time, the only Badfinger music I had heard was an 8-track of Straight Up that had no label and at the time was by an artist unknown to me. But I loved that 8-track and saw similarities between the bands. Later, after I finally found out who the artist was on that 8-track, I discovered Badfinger's Wish You Were Here. This brought the two bands even closer.

Say What You Mean remained one of my most played albums throughout my teens and when compact discs came onto the market I hoped against hope that this album would find a way to be released on this new format. Unfortunately the only place this happened was Japan, but not until June 2003 when a special "mini-LP' edition was offered and even then the CD was hard to find even at import prices. A couple of years after its release, I finally managed to get this rare gem and was pleased to find it was well worth the wait.

Most of the tracks on the album were written by Bill Rennie and Greg Redding either together or separately with contributions from Memphis mainstays Terry Manning (engineer/producer for the likes of George Thorogood and ZZ Top) and Jack Holder (guitarist/producer with artists like Jonny Lang and Black Oak Arkansas). Together they created some soft rock classics that would play great on today's classic rock radio if only the album had broke through back when released. 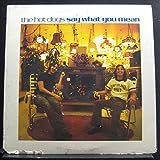 The album starts off strong with one of its best tunes, the title track "Say What You Mean." Bouncing effortlessly back and forth between the retrospectively melodic and the accusatory cacophonous, the song sets the tone for the album and prepares the listener for things to come. This is followed up with the alluring "Morning Rain" which should have been a staple of pop radio. The third track, the solid mid-tempo rocker "When I Come Home Again," makes three winners in a row.

Things slow down for the fourth song, "Time Is All," and I must admit this is usually the low point on the album for me. But I say "usually" because this is a song that when I am in the right mood is a great song. I am not great at in depth analysis of music -- it pretty much either rocks or it doesn't -- but I think maybe there is something about the structure of the first three songs that does not jibe with this one because I seem to like the song much better now that it pops up randomly on my MP3 player than I did when it was always following "When I Come Home Again."

Though the first three songs are probably the strongest part of the album, the remaining seven tunes are no slouchers. The fifth and sixth songs, "Another Smile" and "Thanks," are particularly strong and both should have been hits. These middle of the road pop rockers have enough punch to add some kick but never too much for the radio masses. The next three tunes, "Take the Time To Let Me Know," "Feel Real Fine" and "Let Me Look at the Sun," are all excellent album tracks that let the band branch out a little.

Finishing out the album are "Waiting for a Way To Get To You" and "Lowdown". "Waiting..." is my second favorite song on the record and another song that should have become a classic rock radio regular. "Lowdown" is also excellent and strong finisher to a strong slab of wax. As a teenager, each time I played it I had the urge to flip it over and start again. Many times I did.

The main players in the band -- Bill Rennie and Greg Redding -- popped up here and there in the music industry after the Hot Dogs but sadly neither ever got the major breakthrough they deserved. If you search the Internet though you can find a few tribute sites from folks like me who fondly remember this great band. It seems, as is often the way with great rock and roll, that some of their biggest fans are in Japan. But at least one fan is here in the Good Ol' USA telling you: GO FIND THIS ONE NOW! And rock on!