Blade Runner is the king of all science fiction movies in my humble opinion. The movie is adapted from a Philip K. Dick (and he's the king of sci-fi writers) book: "Do Androids Dream of Electrical Sheep?" and directed by Ridley Scott. As a person who have read the book and watched the movie I can say that they both have their own atmosphere and I can't tell which one is better. (Blade Runner is breaking the tradition of Bad Movies of Good Books). The dust rain in book is pictured as rain in the movie (I guess that's from lack of visual effects in 80's) but the movie gives the dark and gloomy effect of the book. This is why "Blade Runner" is also nominated for the best "Film Noir" lists. There is a 25th year anniversary special 5 Disc DVD suitcase set (You can find in Amazon Links) every Blade Runner fan should add to their archive. My favorite quote from the movie: "I've seen things you people wouldn't believe. Attack ships on fire off the shoulder of Orion. I watched C-beams glitter in the dark near the Tannhauser gate. All those moments will be lost in time, like tears in rain. Time to die."

Terry Gilliam has created a piece of art with 12 Monkeys, playing games with time issue. We have looked at "changing the course of time" concept from an entertaining point of view at "Back to the Future", with 12 monkeys time gets serious. 5 billion people were killed in 1996 and Bruce Willis is sent back to beginning of 90's to eliminate the known source of virus: "Army of Twelve Monkeys". Main character goes between madness and sanity and his dreams and memories blended between past and the future.

Actually this isn't a movie, this is a Stanley Kubrick work of art. You will love or you will hate "2001 a space odyssey". The movie is unique with the long shots of dark and silent space. (You may say that these scenes are boring but space is silent, those Star Wars scenes with X-wings chasing Tie Fighters with all that laser sounds are just a piece of fantasy not science) Arthur Clarke has created one of the best villains in history HAL. If you don't understand the movie I advice you to read the book also which is more informative and easier to understand. There are many trivia's about the movie: HAL is composed IBM's previous letters and even Arthur Clarke didn't understand the end of the movie.

Dark City is another Film-noir. Actually the atmosphere of the movie is so dark that you can suspect your TV's settings. Dark City is dealing with psychology/character and memory relations. Is it possible to change a man by changing his memories? The movie searches for an answer while pleasing the audience with unique atmosphere and lovely Jennifer Connelly.

Writer of 1984 George Orwell has predicted that the world would be under total control of Big Brother. We can't say that he is wrong by 2007 but this movie pictures an utopic world with population enslaved by mind control. This movie has an importance that it actually predicts the situation the world is going now. Maybe you will realize the similarities; how the big nations fighting an imaginative enemy, social life killed by media tools and etc..

If you watch 13th floor after Matrix you may think that they have stolen the concept of Matrix. Actually 13th Floor has been shot way back before. 13th floor deals with my favorite science fiction topic: Simulation. The human technology has developed to simulate a smaller world. There is a theory that if world has technology of simulating a new world then there is a high probability that the world you live on is a simulation too. (This theory isn't mentioned in the movie but I've read an article trying to prove the situation mathematically) I don't want to spoil the movie so you should watch it if you like the concept.

When you see Will Smith and Science Fiction together you can expect another "Men In Black" movie but "I, Robot" is more than your expectations. The story taken from a master of sci-fi Isaac Asimov and his legendary three robot rules. When the robots become smart enough to take advantage of rules (they start to think political like we do) we get to see enough elements from action and sci-fi movies. 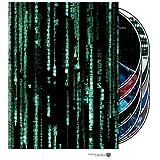 What is Matrix? When you look at other movies in the list you can see that the idea of simulation, robots dominating humans isn't such a new idea. What Matrix has done was collaborating the core of science fiction ideas with the perfect visual effects. The visual effects were a head of all other movies at that time and Matrix has introduced science fiction to large audiences. But nothing is perfect and they had to shoot Matrix II and Matrix III. (You can buy Ultimate Matrix Collection with all three movies and Animatrix which is worth watching from Amazon)

Another Philip K. Dick masterpiece. The movie is inspired from Philip K. Dick's short story : "We can remember it for you wholesale". Actually Arnold Schwarzenegger isn't whom I expect to see in a sci-fi movie but there are exceptions. The story is constructed skillfully and sharing experiences of the Mars dream, memory-character relationship. The director has created an action movie atmosphere (what else can you expect with Arnold Schwarzenegger) the pace is up throughout the movie and you can find action and sci-fi elements together in the movie. The effects could be better but this is a movie you should like with all those cheesy effects, Arnold and three breasted woman.

Pitch Black doesn't have strong script or perfect visual effects but it does have a super chaotic evil villain & hero character: Riddick. The most dangerous criminal of the known universe is transported to a prison and the spacecraft crashes in a deserted planet. So we have a dark character released in a dark planet with the threat of even darker creatures. The movie has the tagline : "Fight Evil With Evil" which pretty much sums up the movie. (You can buy Riddick Triology which contains: Pitch Black / Dark Fury (Animation) / Chronicles of Riddick, from the Amazon link.)