3 Rappers You Don't Want to Miss

Justin is a combat veteran & writer who served the Marines for 13 years. Justin received a BSBA in 2015 and MBA (marketing focus) in 2017.

From the Street to the Stage

It's a new world for music artists. There was once a time when underground Hip Hop and Rap artists had to struggle for years to get noticed by a label and get a shot at success. During these ancient times, arriving at mainstream stardom was a result of simply being the best, or knowing the right people. Often times, those who controlled the labels had an agenda, if an artist didn't fit their mold for success, they didn't stand a chance. The last decade changed all that. We watched YouTube sensations like Justin Bieber go from singing in his living room, to being one of the most successful pop stars in recent history. The sudden access to online platforms that enable "artists" to reach the nation without the help of a producer, much less a label, has created a crowded market of wanna-be stars. With the onset of nearly indecipherable hip hop artists filling the pages of YouTube and the timelines of Twitter, it seems impossible to be recognized through the competition. Despite the confusion, one law of music still remains true - the best rise to the top. Here are three rappers that have leveraged their authentic talent to make a way through the crowd.

"Am I famous yet? Where the f**k is my private jet?" Within Leonardo DaVinchi's TBH (To Be Honest) performance lies genuine reflections of his subconscious struggles; His multi-talented creativity on prominent display. His insightful lyrical content matched seamlessly to a tempo that is sure to keep listeners full attention, Leonardo DaVinchi has captivated hip hop lovers worldwide, even collaborating with artists in France. A natural to music, DaVinchi always found the lyrics in rap to be the most relevant. "I always found the lyrics relatable in rap, and I loved its freedom of expression." Growing up in New York, DaVinchi realized his natural aptitude for writing and was hooked. "I decided to give it a shot so I recorded a few songs and gave out mix tapes in high school - the feedback was encouraging so I decided to stick with it and take it more seriously when I went to college; That's when I started hitting the studio and perfecting the craft. Been doing that ever since."

Surrounded by a nation saturated with hip hop, DaVinchi found his inspiration in T.I., and even credits him with getting started. "He (T.I.) was the guy that sparked the desire for me to rap in the first place. Being a young kid, I was really impressed by his presence in hip hop, and that's something I wanted one day." DaVinchi also sites Tupac as a major influence, "Listening to him was like reading a good philosophy book - He reminded me to keep the realness alive in music." DaVinchi's keen sense for music doesn't just end with rap; However, being a naturally gifted singer since Pre-K as well. "The Weeknd is another influence - I've been listening to him since the beginning, and if I connect with anyone's music, it's his." Siting the Weeknd's melodic style and subterranean meaning, DaVinchi says "It helped me find the way I wanted to express myself as an artist, in sound, when it comes to singing."

What do you love most about music? "What I love about music is it allows me to be my ideal self. It allows me to be myself and my best. That's why I love going to the studio; It's the one place i can shut the world out for a few hours and create. Its brilliant because I always write about my life - whats been going on emotionally, and I can capture that period of my life in a song. When I listen back to songs or projects, it's like revisiting the past. It's a moment captured, like a photograph. It's creating timeless moments and expressing them through song. Once I'm gone, my music is still here. And that's the key to immortality."

The hat says it all, "QBC." Maurice Robinson, aka "Docman," hails from the same afflicted streets that gave us legendary rap icons NAS and Mobb Deep - Queensbridge, New York. It's no surprise that Robinson's messages are packed with social and political depth, a reflection of his keen perceptiveness and lyrical creativity. "Queens made me," says Robinson, "but Houston raised me." In 2007, Robinson relocated to Houston, Texas where he has continued to develop his lyrical artistry, but he'll never leave behind the influence the QBC had on his life. From the age of 2 years old, Robinson was surrounded by the type of negative cultural influences all too common to the youth of that area. Fortunately, Robinson found his passion in music. "When I used to live in New York, my older cousin used to freestyle a lot on the block. I wanted to do everything he did. I had the little brother syndrome bad." Inspiring creativity in Robinson wasn't the only impact his cousin had, "He was real heavy into the typical drug dealer life - I wanted to do that also, but he wouldn't let me." In 2004, tragedy struck as Robinson's cousin was shot and killed outside of a club, just before he died he influenced Robinson one last time, "he told me never let anyone or anything stop you from getting your money. I rap because I feel like it's my way to stay connected with him."

As a developing artist, Robinson was heavily affected by the works of Tupac Shakur, "His struggle I feel coincides with mine so much." Robinson believes that one of the more notable aspects of Tupac's influence was his content versatility, "In his music, you get the party Pac, the happy Pac, the political Pac and the love Pac - All of the styles could stand alone and be epic. That's how I want my music to be." Robinson's sense of cultural creativity allows him to identify the contradictory messages in rap and hip hop, yet understand the applicable message in each of them, "I want to be able to tell your kids to put the guns down and at the same time, pick them up when someone is messing with your family." When speaking specifically about modern day influences, Robinson sited Kendrick Lamar, "Kendrick is my modern day influence because his creativity is unmatched when it comes to today's rappers. I admire that a lot."

Check out Docman's new release below.

Reno, Nevada is the last place you would expect to find the "next big thing" in rap. Then again, when it comes to Feeki, every basic assumption about the rap demographic should be thrown out the window. He's a dirt bike ridin', mullet-rockin' dessert dweller with sunglasses that were likely stolen from Jeff Foxworthy. One thing is certain; this rapper from the small town of Gardnerville, NV, has everyone's attention. Just over 6 days ago (January 18th), Feeki posted a "freestyle" on Facebook, performed over the soundtrack of Eminem's "The Real Slim Shady." The results were unexpected, even to him.

"5 MILLION views! Really grateful for this exposure. Long time coming. That's one million for every year I've been busting my ass for something like this to happen. No such thing as 'overnight success.' Thanks for all the support, new and old"

Despite the fickle nature of success through social media, Feeki’s talents within the music industry was no accident, starting out young, “I used to play in a band as a kid, from about 12-14 years old.” Taking a hiatus from the world of making music, Feeki raced motocross for over 5 years before coming back to the industry, “I got back into music when I was 19 – by that time, I was listening to mostly hip hop.” Siting Mac Miller as one of the influences on his decision to apply his talents to the world of rap, Feeki noticed Miller on YouTube, “I said damn, he looks like he’s having a lot more fun doing that than me sitting here watching it. I gave it a go and enjoyed it, I wasn’t good by a long shot, but it was fun.” Feeki found one of the major aspects of hip hop that he enjoyed the most was his ability to practice without coordinating around an entire band’s schedule, “You can just practice alone everyday with online beats to get better.”

Who were your major influences? “I am influenced by a lot of people, I like all music. Many people say that but I think that comes with creating music. You can really appreciate elements of all different genres that you would have never heard before if you weren’t into making music. I don’t just listen to hip hop, and when I do, I’m not just listening to artists that are similar to me – I like to check out everyone’s new albums, or put on Pandora to expose myself to stuff I haven’t heard before. When I’m creating, I try not to be like anyone else, I just want to do my own thing and if it sounds different or similar to someone else, that’s fine – That’s what I came up with.”

What do you love most about making music? “I like the fact that there are no rules. I can say whatever I want. I don’t have to follow a format for a song – I can just rap as many bars as I want, or make it structured, whatever you come up with is yours. I like the entrepreneurial aspect too – If you work hard at your craft, no matter what it is, you can be successful and control the path of your life instead of listening to what other people think and falling into the trap of mediocrity.”

With over 78,000 followers on Facebook, Feeki has been gaining notoriety primarily through social media outlets over the last several years. Ironically, the kind of support Feeki has gained doesn't just come solely from his unique style and implied sense of humor; despite the inevitable "eye rolls" from outside hip hop artists, Feeki has proven his lyrical capabilities. Today, Feeki can be found on iTunes, Google Play and Spotify.

Check Out Feeki's New Release "Way Up" Below

Which Artist Do You Most Connect With? 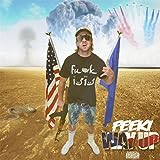