5 Portable Ways to Practice Guitar With an Amp

John is a fervent writer, gamer, and guitar lover. He is a former automatic-transmission repairer, welder, and hobbyist game developer.

Electric guitars are quite literally designed to be played through an amp. Sure, you don’t need an amplifier to pluck away at your axe—maybe you’re practising, maybe you’re just trying to come up with a melody for a new song—you could probably get by without your guitar hooked up to an amplifier.

But why should you?

There are many reasons why it might be impractical to play through an amplifier. You could be on the move, for instance. And while travelling with a guitar might be feasible, travelling with a big combo amp or amp head and cab certainly isn’t. Maybe your amp is upstairs and everyone else in the house is in bed. Whatever reason you find yourself amp-less, there is a solution. We’re going to look at five portable ways for you to get that amp’d guitar sound without having to lug your big heavy rig around with you.

They're small, cheap, and most of us have one.

Starting with the biggest of our portable amp solutions, the regular old practice amp is an old and reliable standby. Many guitar owners will own practice amp if for no other reason than they tend to be thrown in with various deals and “packs”, so it’s a nice and easy solution for many that doesn’t require much—if any—spending.

Practice amps can vary in size but tend to be small and light enough that you can carry them with little effort. The sizes (and shapes, for that matter) may differ, but a typical practice amp will be roughly a cube of ten inches across.

These amps don’t often carry much in the way of effects—you might get a reverb dial or overdrive button—and the range of sounds you'll get will be fairly limited, but some sacrifices have to be made in the name of portability. Depending on the amp you get, there may be additional useful features such as an aux in, allowing you to plug in a phone or music player to play along with, and many now come with a built in tuner, which is one less thing to have to carry around with you.

While far smaller than a "full fat" amp, practice amps are by no means an insignificant item to carry around with you. But then, if you’re carrying a guitar already, this isn’t that big of an addition.

They're smaller, cheaper, and they run on batteries.

Practice Amp too big for you? Fear not, the micro amp is here to save the day. Micro or mini amps, as the name suggests, are smaller still than the practice amps. Less than half the size of a typical practice amp in many cases.

In addition to being small and light enough to hold comfortably in one hand, micro amps can also run on batteries, adding an extra degree of portability to the equation. Unlike some of the options presented on this list, the micro amps do have a speaker so you can make noise if you want to. And you might be surprised at just how much noise one of these little guys can put out.

As you might expect, micro amps are more limited still than their larger cousins, and tend offer little more than volume and tone controls. I personally own an Orange Micro Crush CR3, which in addition to volume and tone dials, also has an overdrive button and a built in tuner. This particular micro amp can be run from either a 9V power adaptor or a 9V battery, which is typical among this kind of amp.

They're tiny. I mean, REALLY small.

Micro amp still too big? How about a solution that not only fits in the palm of your hand, but is also small enough that you could close your hand around it? That’s exactly what a guitar plug is.

Essentially, a guitar plug is a amp simulation with a 1/4" jack attached to it and a headphone socket, and there’s no external speaker so it’s headphones or nothing with these. While the actual features differ depending on the model you buy, most have volume, tone, and gain controls, as well as an aux in so you can play along with your favourite song.

There are many options in terms of manufacturers of guitar plugs, but the only bonafide amp manufacturer who has really thrown their hat in this arena with any real intent is Vox. Vox not only have a number guitar plugs on offer (they call them “amPlug”), but they sound amazing. In particular, the Vox AC30 amPlug sounds as close to the real thing as you could ever hope to get from something that costs less than small pedal board.

You're probably already carrying one with you.

Phones can do everything these days. Okay, maybe not everything, but they can do this. There are a host of apps out there that allow you to use your phone, tablet, or other iOS or Android device as a guitar amplifier.

While you do need an adapter to connect your guitar to your smart device (IK's own iRig will do the trick), this kind of solution offers one thing the others on this list lack; options. While the above have very little versatility when it comes to the sound they produce, an amp simulation amp allows you to switch between a selection of amps, pedals, and in the case of Amplitube, even cabs and rooms. 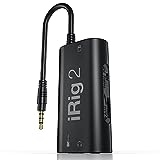 It does exactly what it says on the... well, box.

There are many guitar pedals out there that aim to emulate popular amps. These can be handy for getting close to a particular sound without having to throw thousands of dollars at a problem, but they can also act as an amp in a box for real.

Guitar pedals by their very nature are small, and depending on the pedal they can often be powered by batteries which plays nicely into our requirement that our amp solution be portable. The amount of flexibility you get will depend on the pedal you buy. You should do some research before buying; many pedals are designed to emulate specific amp sounds.

Remember, these are technically guitar pedals so you will either need something to plug them into (like a practice amp) or a way of connecting your headphones to the 1/4“ output jack on the pedal itself.

It’s worth investing in a decent set of headphones if you’re going to be using them to practice guitar, which is likely if you’re travelling. My recommendation is a set if Behringer HPS3000 over ear headphones. They are inexpensive, give a good quality sound, and come with attachments that will fit both 1/4“ and 3/8“ headphone jacks.

If you play with guitar picks, put a few in your wallet or in a pick holder key ring. It can be incredibly frustrating to go to all the trouble of taking a practice amp or one of the other solutions on this list on a trip and forgetting to take a pick.