A genre of movies or books that I am always a sucker for is historical fiction. It allows me the chance to learn something as well as get swept away in a story.

The movie Abraham Lincoln: Vampire Hunter, based on a novel by Seth Grahame-Smith, grasps to a universe based on ours, in which slavery was an injustice worth fighting for in the United States, and it was President Abraham Lincoln who induced the war to set them free. However, in Grahame-Smith's universe, vampires were a very real and harsh underground reality, and Lincoln's focus on this country and family were divided by another hobby: hunting and slaying Vampires. 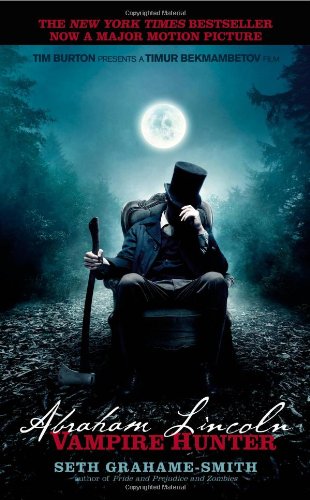 A Summery of the Film

The movie outlines Lincoln's history, starting when he was a very young, only child, and defending an African American boy his own age who was getting whipped. That night, Lincoln's mother died due to a strange illness with an odd marking on her wrist. His father asked that he do nothing rash, a promise which Abraham kept until his father died. Soon after, he goes out to kill the man he thought responsible for his mother's death, nine years before, Jack Bart (played by Marton Csokas). Bart is shot in the eye, though does not falter, leaving an adult Lincoln (Benjamin Walker) in a world of trouble. He is saved by his soon to be mentor, Henry Sturges (Dominic Cooper), who teaches Lincoln about the world of vampires, and how to slay them one by one. Fueled by his need to avenge his mother, Lincoln kills each vampire that Henry assigns him, eagerly awaiting the time when Bart's name will appear on the list.

During this time, he begins work in a shop under the owner, Joshua Speed. Through his work he meets Miss Mary Todd, who he falls in love with. One day he is surprised when is old friend, the little boy he stood up for at the opening of the movie, turns up in his shop, and tells him of the slavery down south. When Abraham marries Mary Todd, he relays to his old friend, Will (who is the boy he stopped from getting whipped as a child), that he is the only family he has now.

It wasn't long before Will was kidnapped and taken south the the slave plantations, where it was seen that one of the largest plantation owners was a vampire named Adam, who fed his fellow vampires the blood of other slaves. It was this that inspired Lincoln to run for president, to abolish slavery.

This historically inaccurate move was worth the inaccuracies. Though having said that, one does not watch a movie about slaying vampires for a history lesson. The story itself was not its strength, but the visual mastery which went into it made up for the weaker story.

When I go into a movie I want an unpredictable ending, I want it to be visually pleasing, I want it to make me think. On a creative level, it made me think. I began looking at ways to twist other well known stories into logical sci-fi or fantasy themes. For that, I appreciated the movie.

When I watched the movie, I watched it on an HD TV, which has been known for pointing out many flaws in movies high in special effects. I did not see through the masks of this movie. It was seamless, and beautifully and artfully done - the action scenes that is. The colors of scenes were tinted to give it an old-timy look, but the flames of the bridge roared with conviction and left me in visual aw.

I would recommend it to any one. The historical inaccuracies provide a good amount of comedy, while the action scenes are well articulated. It is not overly graphic, and thus could be watched by those who are squeamish.

I give it a thumbs up, and I look forward to seeing more of Timur Bekmambetov's work.