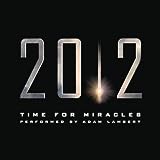 For Adam Lambert fans who thought they had an exciting week coming up with the release of his new song Time For Miracles, things just got more interesting. They were jolted with a media bombshell that had nothing to do with a disaster movie, when Lambert announced via Twitter, that he would be gracing the November cover of Details magazine, and divulged that the photo shoot for the story was "pretty racy". News of the shoot has already fetched coverage from several entertainment news programs, and earnest fans eager to get a look before November have been treated to an advanced peep at the pics, courtesy of a resourceful user on LiveJournal.com.

The Details publication, described as "a daring, distinctive magazine for men who are passionate about adventure, style, music, fashion, sports, politics, humor and pop culture., has captured Adam and a seemingly ambiguous female model in some daringly intimate poses. One of the pics reveals a fully clothed Adam clutching the woman's naked body while resting his head peacefully on her thigh; a look of reverent appreciation adorning his face.

Not unlike his Rolling Stone magazine cover, there are a few symbolic gestures contained in the photographs, and his fans are up for the scrutiny. For one, his signature black nail polish has clearly been picked half off, a habit Lambert has confessed to indulging in when anxious or nervous. This could be a subtle representation of his awkward intimacy with women, since Lambert is openly gay. Though he has indicated that he enjoys women, he's pushing his own envelope a bit with this one. For Lambert, an unkept manicure would not otherwise be overlooked for a national photo shoot. Not without purpose, anyway.

Another interesting, and rather obvious display, is the way he smooth-handles the woman lithely stretched out beneath him like a wanton feline. His left hand rests firmly and deliberately on her breast, but his right hand rests rather tentatively on her thigh, making only partial contact; another hint of hesitation in giving himself up to her completely.

In each of the photos, in fact, Lambert holds back something. Even a photo of him kissing the model involves no actual lip lock. Perhaps he is trying to display the genuine appreciation he has for women,while standing his ground as a gay man. He hasn't compromised his sexuality in any way, further symbolized by how he remains fully clothed, and his submissive role in the photos present him in a very un-threatening manner. It appears he is cleverly capitalizing on the attraction from women by indulging their fantasies, and using these masterfully choreographed images to do it. Subsequently, he is preserving his status and appeal; leaving no one out of his marketing plan.

And let's face it, a little shock is good for his stock.

While Adam Lambert's number one asset is his voice, he's made this statement without even having to use it. But what exactly is he trying to say? Only he knows the answer to that. He's playing a little game of mental hopscotch with the media, and perhaps with us as well. And with Adam Lambert, we are quickly learning, there are no accidents- particularly in how he presents himself to the world. This layout will certainly generate discussion about his motives, and provoke some thought about gender attractions. I think he'd call it a good day if he inspired people to revisit the status quo on sexuality, love, and freedom, though.They are the basis, after all, for his music and his life.

The rest is just details...

Authors Note: Out of respect and professional courtesy to the publishers, I have elected to refrain from publishing the pictures contained in the Details magazine layout. The release date for this issue is scheduled for early November.

For news and updates on Adam Lambert