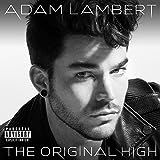 Adam Lambert is about as subtle as a marching band.

He proves this once again with the release of “For Your Entertainment”, the first single from his upcoming CD of the same name. Entertaining indeed, Lambert brings a whole new meaning to the word. How many artists can combine an upbeat, techno-glam rhythm with an S&M lyric that would have made Andy Warhol blush? Lambert is indulging in a sound that’s all his own, with music you can feel, taste, and inhale.

Baby, do what I say

Don’t trip on the glitz that I’m gonna display

And Lambert knows it. Without a warning shot, he fires away with a musical vibe reminiscent of Frankie Goes To Hollywood, and teases you all the way up a climatic scale; making you beg for that final release. The carnal connection between master and slave deepens as Lambert becomes one with the song ,and grinds out a vocal invitation, conjuring up that intangible sensation we call ecstasy; a word becoming more and more synonymous with Lambert.

If For Your Entertainment is only his first solo entry into our beloved iPods, what does he have in store for his Glamberts next? What's most notable right now, is the diversity of his talent as he reawakens the sexual psyche of a musically ambivalent generation, and delivers to younger fans, a fierce wake-up call.

That seems like a lot to accomplish for just one guy, but Adam Lambert is pulling it off....

Strictly For Your Entertainment, of course.

For Information and Updates on Adam Lambert