Adam Lambert Rocks It Out 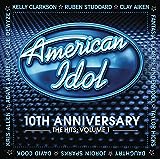 And then there were three....

What does that tell us?

Granted, it was a night of Rock n Roll, which clearly fits right in with Lambert's style, but many believe he could have done just as well in any other genre. He's proven consistently that he was up to the challenge in all of this season's song categories.

How many would be so bold as to attempt a Led Zeppelin song, much less Whole Lotta Love, one of their signature greats? Lambert showed no hesitation in belting out, in perfect pitch, a gritting rendition that would make Robert Plant himself stand and take notice. Slash was impressed enough when he spent a few hours with Lambert at the Roxy rehearsing the song. "This dude has some pipes", he grinned. Pipes indeed, and he's not afraid to use them.

Next week, the final three get to go home for a parade in their honor. Many are looking forward to seeing the roots from which Adam Lambert grew. There's been a lot of speculation about this fellow. Who is he, really? Where does he come from? Who is he friends with?, Who is he really good friends with?...America wants to know it all, or at least a great many of them do.

All I want to know is, how is this guy not famous already? Let's review his plus (+) column; great voice-great look-great dancer-great stage presence-great hair. What else is there? Oh, let's not forget that he's classically trained with a big splash of raw talent and exceptional instincts. Say what you want about his theatrics, when push comes to shove, this guy delivers.

Whether he wins the top spot or not, we're going to be seeing a lot more of Adam Lambert. The only thing left to ask is.... what will he do next?

After all, that's the question that's kept the judges and American Idol audiences on the edge of their seats for the past several weeks, and let's face it.....it's worked well for him so far-