I'll say this for Friday the 13th part 2: The technical credits are better here than they were before. The cinematography by Peter Stein favors a number of solid widescreen shots and long takes, and the production design by Virginia Fields is much more noteworthy than it was in the original (there's a creepy shrine to the original movie's killer, which we don't see until the climax). For what it's worth, this is actually a good looking movie.

To top it off, the movie gives us a leading lady, named Ginny (Amy Steel), who's at least somewhat interesting. A student of child psychology, her character is given a decently written scene where she tries to provide a psychological profile on Jason to her drunken buddies. And while she does behave foolishly when Jason starts to chase after her in the end, she at least manages to give the knife happy killer a well-deserved kick in the gonads. There's also another very well played scene where she messes with Jason's head by putting on his mother's sweater and pretending to be her.

It helps that Steele turns in a fairly decent performance.

Yet even with all that said, this movie is still not very good.

The problems begin right from the word go. The movie opens up at a residential neighborhood on a quiet evening. After a mother calls her young son into the house, Jason walks into the frame, and while he died as a small child after he drowned at Camp Crystal Lake (he was still a small child when he attacked the final survivor at the end of part one), he now has the body of a WWF wrestler. The movie explains this by saying that Jason didn't really die, which not only makes the scene at the end of part 1 confusing, it also means that mommy kind of went cuckoo for no reason.

Anyway, Jason was able to track down final girl Alice (Adrienne King) to her home (how he did so is never explained, but never mind). As we see Jason walking up toward her house, we cut to a scene in the upstairs bedroom, where Alice is asleep on the bed and having nightmares about her experience from the first movie. For five minutes, we watch as she squirms and screams on the bed while we get a recap of the first movie's climax. Five. Whole. Minutes. It's enough to make you scream at the screen, "Can someone wake her up already!?"

She does, and afterward, we follow her as she screams at her mom on the phone, takes a shower (while only getting strands of hair on the front of her head wet), gets a menacing phone call, and damn near has a heart attack when her cat jumps through an open window. She then opens the frig to give the little fur ball something to eat, and then...well, let's just say we won't be seeing her again any time soon.

After that, we cut to the main story, which is so similar to the original that it's hardly worth writing about. The movie gives us a bunch of bland and interchangeable horny teens, places them in a woodsy camp area, and then proceeds to kill them off one-by-one. The only differences here is that instead of having the action take place at Camp Crystal Lake, it takes place at a Counselor Training Camp (which is just walking distance from Crystal Lake, so it's really not that much of a difference). Oh, there's also one character who is in a wheelchair, and the leading lady is, as mentioned, a little interesting. That's really about it.

The movie meanders for much of its running time, throwing in extraneous subplots that slow the proceedings to a crawl (like the two kids who try to sneak over to the off limits Camp Crystal Lake to see what's over there), until it finally reaches a climax that involves future victims making Jason's job of killing them easy by not running from him and continuously dropping their weapons after only wounding him.

All of this would have been a whole lot worse were it not for the fact that director Steve Miner handles the proceedings with style and a small dose of dark humor. One scene I thought was kind of funny comes when a little puppy dog stops at Jason's feet, and that shot is immediately followed by a close-up shot of hot dogs cooking on a grill. Not only did I chuckle, but I also felt a little hungry afterwards (I know, I have a sick sense of humor).

As was the case with the previous movie, both the acting and the dialogue are pretty bad, but that's to be expected from this franchise. Friday the 13th part 2 takes the formula established by the previous movie, and manages to work with it in a way that's fairly watchable. That's not to say that the movie's good (it really isn't), but it's reasonably entertaining for what it is if you don't expect much from it, and it's certainly a hell of a whole lot better than its predecessor.

I'd buy this on VHS. It'll add to the nostalgia factor. :P 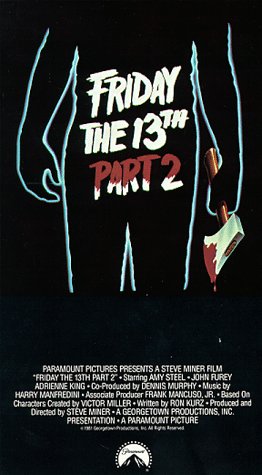