Just when you thought the Friday the 13th movies were incapable of producing a single original idea, along comes Part 3. This movie has a twist so ingenious, so unique, and so unbelievable that it still baffles my mind just thinking about it. It is the one thing that separates it from the previous chapters (and the later ones, for that matter). Are you ready to hear this amazing twist? You might want to take a deep breath beforehand, because you're sure to be blown away.

Instead of wearing a Klansman’s hoodie over his head like he did in part 2, this time Jason wears...a hockey mask!

Can you believe it!?

Outside of that one new element (and the fact that the movie was filmed in crappy 3D, which leads to a number of spectacularly bad shots), there is nothing to distinguish this movie from every other film in the franchise. Friday the 13th part 3 is just business as usual. We get the same bunch of obnoxious kids, the same predictably gruesome deaths, and the same climax where the final girl and the killer fight to the death.

What is surprising is that some of the characters are shockingly more annoying here than they were in the previous movies. This is especially true of a character named Shelley (Larry Zerner), an insecure chubby kid who has a knack of playing some surprisingly tasteless tricks on his friends (one of them involves him pretending to be murdered by having a fake hatchet sticking out of his head -- ha, ha!), and then complaining about how nobody likes him afterward. Poor dear.

And like the previous movie (which was also directed by Steve Miner), the movie suffers from some serious pacing issues. After a five minute recap of the previous movie's climax, the movie then plunges us into an entirely needless prologue involving a bickering married couple who run an isolated Mom and Pop grocery shop. We follow these two endlessly as they bicker, he eats some of the merchandise and takes a dump after (he doesn't even wipe!), she does the laundry and watches a news report about the events that occurred in part 2, and they constantly go out of their way to investigate strange noises or mysterious shadows.

Eventually, Jason shows up, kills them, and...well, that's really it (we see their bodies being taken away in an ambulance later). I guess Jason was so angry about the one who got away in the previous movie that he decided to take his rage out on people who were nowhere near his domain. Jason doesn't seem to target those who wonder near the camp grounds anymore, and before you assume that the movie will take place in an entirely new location, we're introduced to a stereotypical bunch of teens driving out to a house in, you guessed it, the woods near the camp grounds.

One of the teens is said to be pregnant, which is mentioned only in passing, and which makes her death scene all the more distasteful. Along with the teens are two stoners who looked to be in their 30s, which left me wondering just what in the hell they were doing going on a road trip with a bunch of kids much younger than them.

As was the case with the previous movies, the acting is terrible, the dialogue is deplorable, and the scares are non-existent. While director Steve Miner brought some humor and technical prowess to the previous chapter, here he makes a movie that looks surprisingly worse than the first movie. The cinematography by Gerald Feil is flat, the techno musical score by Harry Manfredni is grating, and the art direction and set design are both nondescript.

Even the movie's "final scare" is a direct copy of the original movie's, although instead of a small zombie boy jumping out of the lake and pulling the final lady underwater, it's Jason's mother, who was decapitated in the first movie, but has her head intact in this scene (before you scream continuity error, just know that the scene is revealed to be nothing more than a delusion).

Nothing about this movie stands out, not the kills, not the film's look, and not that annoying motorcycle gang that shows up for no other reason than to escalate the body count. This was the worst movie in the franchise by then, although I will give it credit for something. The film's final shot was of a placid lake, and the scenery was so beautiful, that I actually had the urge to get out and go camping.

Rated R for bloody violence, prof…ah, you know the routine. 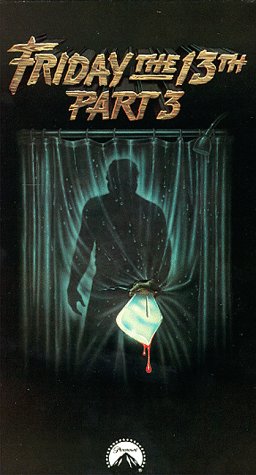