Many consider Alfred Hitchcock to be the Master of Suspense as well as one of the (if not the) greatest directors of all time. Hitchcock revolutionized cinema; helped make Cary Grant, Grace Kelly, and Ingrid Bergman mega-stars; and his influence is felt to this day when a visually sumptuous or an elaborately-plotted film is deemed "Hitchcockian". William Friedkin, the director of The Exorcist and The French Connection, advises aspiring directors and film students to simply watch Hitchcock if they want to learn the craft. But which Hitchcock films are essential viewing? This list gives the plot of ten of his essential classics in a sentence; explains why they are considered classics; describes his most iconic scenes; and lists his cameos in each.

William Friedkin on Hitchcock and Vertigo

Trailer for North by Northwest 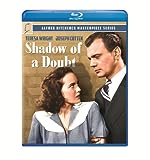 Shadow of a Doubt

Trailer for Shadow of a Doubt

Strangers on a Train

Trailer for Strangers on a Train

Trailer for The Birds

Alfred Hitchcock: A Life in Darkness and Light
Buy Now

What is your favorite Hitchcock film?