Update: If you have a 2nd Generation Apple TV you can do some amazing things once it is Jailbroken.

We have a post on mkvXstream that tells you which top four Add-Ons to use with XBMC to make your AppleTV 2 Rock! While only 720p, the picture quality is still amazing and your eyes will hardly tell the difference.

A Jailbreak for the Apple TV 3 is looking more and more unlikely anytime soon. Limited quantities of the

2nd generation Apple TV are still available and once Jailbroken along with XBMC, it makes one of the best media streamers currently available today for watching TV without cable.

<< Warning >> Please be aware, performing the following mod can delete your AppleTV OEM software. While there is a way to reinstall it, there were some issues with this and Crystalbuntu in the past. This software may require tweaking and if you do not enjoy messing with terminal and linux commands, I would advise against using it. You are better off selling your 1st generation Apple TV and buying another type of media streamer that runs natively at 1080p if this is important to you.

Turn your 1st Generation AppleTV into an HTPC!!!

With the costs of television programming rising all the time. Here is something you can do to fight back. Apple makes a handy little device, hardly bigger than a portable hard drive that allows you to download movies and also entire TV series directly from the Apple Store, it will save countless trips to the mail box or local Redbox.

What separates the Apple TV from it's main competitor, Netflix streaming content, is many of the movies and TV shows available for download are newer releases and available in HD (720P). In it's factory default configuration, an AppleTV will only play h264 and mpeg4 video content. In this article I will show you how to do a few simple mods so it will play virtually any content downloaded or otherwise. This will make the AppleTV so much more versatile and fun to use.

The AppleTV connects to your HDTV with a single HDMI cable. Apple tied to iTunes which only allows you to purchase movies and sync them on your large screen television.

With the original AppleTV, an entire iTunes music collection could be stored on it's internal hard drive and then played through TV speakers or even a home audio system. The new version only allows you to Stream movies or TV shows from a PC or Mac through iTunes and no longer includes an internal drive.

They both allow you to play YouTube videos and also play free Podcasts through iTunes. They will even schedule Podcasts and download new Podcasts automatically as soon as you open iTunes on your PC or Mac.

The absolute best thing about the Apple TV is it's simple and intuitive interface. It's menus are very easy to navigate and simple to use by anyone in the family. This great interface is why the Apple TV is still considered one of the best

If you decide not to install the free Linux/XBMC software mentioned above, which by the way is super efficient and less bloated than the native Apple OS. Try using this method below.

To get the most from your first generation Apple TV it requires a simple mod called PatchStick. To learn more about this mod watch the video to see how easy it is to apply. The patch stick opens up your AppleTV so you have the ability to play many more video formats than it will with it's default factory configuration.

Another great feature of modding your Apple TV, is it gives you the ability to directly communicate from your PC or Mac through SSH and upload files to the internal hard drive through a simple ftp client. You are no longer required to sync your files through iTunes. There are also many great packages you can install such as Boxee, Sapphire and NitoTV. These apps will allow you to watch so much more TV content from the net, that some people are actually canceling their cable TV service.

Presently the Apple TV can't play full HD .mkv files very well, although there is a hardware mod that uses xbmc along with a

crystal HD card you can install, that will allow the AppleTV to play full 1080 HD .mkv videos.

The biggest problem with patching your Apple TV, is every time Apple releases a software update, you will need to reapply your patch. There is a special setting you can check in your modded Apple TV that will disable automatic updates. A modded Apple TV will still work with iTunes and allow all the other features to continue to work. Should you ever want to restore your AppleTV back to factory default, it is very easy to put it back to the way it came out of the box. It will require any Apple software updates to be downloaded and reinstalled.

In the beginning, I used my Apple TV the factory default way but soon got tired of having to convert everything to MPEG-4 so it would sync and play on the Apple TV. Not only was it time consuming, it also placed a considerable load on my computer CPU. After applying the simple patch I have never looked back. It is so much more usable and versatile now.

Even as it comes from the factory, the Apple TV is still a great as it allows you to rent and download movies and entire TV series without ever leaving your couch. You may find yourself watching far less cable television after owning an Apple TV.

Unlike Tivo which charges you $12.95 a month, there is no additional monthly usage fee other than the content you purchase from the Apple Store. By selecting only what you want to watch along with some of the apps mentioned here, you can finally cut the expensive monthly costs associated with Cable and Satellite TV. So to answer the question, yes it can cut your monthly television programming costs. Many people have cut their service completely or downgraded to the low cost basic programming package. They are perfectly content to stream content from the net using Boxee, Hulu or other online sources.

Simple instructions on how to mod your Apple TV and install Boxee.

Step 2
Insert a "bootable" USB drive into your Mac.

Step3
Run the ATVUSB-Creator and select your Apple TV version number (e.g., 2.1) and Boxee for Mac.

Step 4
Remove the USB drive and plug it into your Apple TV.

Step 5
Power on your AppleTV. The patchstick will run the ATV bootloader.

Step 6
After the bootloader finishes, remove the thumb drive from your Apple TV.

Step 8
Click Boxee on the main menu. Then select update (this will download Boxee from the Internet).

Step 10
Once Boxee is done installing, restart your Apple TV.

Step 11
Click Boxee, and then select Boxee in the sub-menu to start the interface.

Here's Scott Devilla talking about how to upgrade your Apple TV running 2.1 software with the boxee and XBMC media centers. 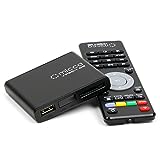 [Featurette] Planet 51: Life On Planet 51
Try this Tip for Watching Free Movies and TV Shows on Amazon. Click free in the search box on the page that comes up for a list all free shows to watch instantly.
Buy Now