Are Garage Bands the Same as Pure Rock Bands?

I Have to Confess Here and Now

that I was one of the blessed Rock lovers who were among the many to hear the songs from The Seeds, The Electric Prunes and Sam The Sham and The Pharaohs. I make no apologies for this statement because I told the truth.

I would get my transistor radio, tune to (our) Rock Station: WVOK, The Mighty 690, located in Bessemer, Ala., with 50,000 watts of pure Rock Power and even the DJ’s were trained to fall right into The Groove with Rock Music as it grew and evolved into the force of entertainment that is here in 2019.

No. Not many of (my) bands (like those below) are here around, but I have all of their memories, or most of them. And I would not trade them for no Rock Collection of LP’s from any Rock Fan whether they be human or alien. We loved these bands this much.

who have suffered to grow to age 11, I was, at most, stupid, confused as to what or where to go in fifth-grade, but the one area of my life emerged as a “Safe Haven” undisturbed by outside static: Rock and Rock Bands. What a year that was. Fifth grade ran through my life like chocolate gravy ran through my young body. Little did I know the importance of my three favorite bands: The Seeds, The Electric Prunes, and Sam The Sham and The Pharaohs, with Sam The Sham becoming to be “our” favorite songs by those who were as stupid and awkward as I was.

The bands (in above paragraph) The Seeds, The Electric Prunes, Sam The Sham and The Pharaohs, were considered the front-runners of Garage Bands, who only formed and played behind the scenes working hard to make the scene when Rock Music afforded them a slick opportunity. More bands included: The Sonics; The Stooges; The Kingsmen; The Strokes and Paul Revere and The Raiders who ended-up on national TV with Dick “Mr. Music” Clark’s Where The Action Is and American Bandstand and made a few truckloads of fame as well as the bucks, but not all of these early Garage Bands got out of their work in the shroud of darkness and obscurity.

That could not be said about those three bands that I chose to be my favorites—especially the song by the Seeds, “Pushing Too Hard,” that we memorized and sang, (many times incorrectly) while we ran through the halls of our Grade School only to impress the pretty girls who now began to know why they were called Females. But even with that revelation, The Seeds captured my attention. And the name, The Electric Prunes, (caught my attention), with their hit, “I Had Too Much to Dream Last Night,” that dealt with mainly the psychedelic mentions of drug-induced sleep and what happened behind drowsy eyelids, but still, what a band they were. The same goes for The Seeds.

But There Came a

moment like any other moment, a moment that rode on the tail of Haley’s Comet and went by the moniker, Sam The Sham and The Pharaohs, which we, the awkward 11-year-old’s, did not understand their Reggae foundation, but we learned (quickly) how to love their sound. This band has many real hits like: “Wooly Bully,” “Lil’ Red Ridin’Hood,” and “Haunted House.” These hits were not meant to break-through the fanfare of other Garage Bands, but there again, Sam The Sham did not care. He and The Pharaohs just wanted to perform for the masses. And they did very well.

In 1973, everything changed for Sam The Sham when he asked The Lord to free him from drug abuse and for The Lord to use the talent that He had given to Sam The Sham and thus, he went away from the Music World to become a street preacher—spreading The Gospel, feeding the hungry, and lending a hand who cannot help themselves.

I loved Sam The Sham and The Pharaohs, The Seeds, and The Electric Prunes, but as far as being an “addict.” That is not to say that my friends and I did not dominate our conversations about music and (these bands), no. We did just that. We even tried to sing their songs and went about as far as we could toss a live mule 45 yards or more. Failure, when you are 11, does not hurt as much as when you are a fully-grown adult. Remember that.

Pushin Too Hard (Original Soundtrack)
The Seeds were formed when I was in the fifth-grade, and I loved their song, "Pushing Too Hard," and every Rock fan alive loved the song and their style. Even today in 2019, I admit that I still love the song and me at 65.
Buy Now

when I was 11, when lead singer Sky Saxon went to check-out an advertisement. A life-changing ad. Saxon, who had moved to Los Angeles from Salt Lake City, had recorded a line of 45s aka/ Richie Marsh. The band scored regular dates at the LA club Bido Lito's and quickly secured a local rep for high energy live performances--which was Saxon’s calling.

Keyboardist Daryl Hooper was the main reason for the Seeds' sound; early on, the band was one of the first to use keyboard bass. Novel, yet powerful. Guitarists Jan Savage and Jeremy Levine along with drummer Rick Andridge completed the original foursome, but Levine left shortly after the first recording sessions for personal reasons. Although Saxon was usually credited as bass player, he did not play bass on any of the Seeds' tapes. This was managed by session musicians, Harvey Sharpe. On stage, keyboardist Daryl Hooper played the bass parts via bass keyboard, in the same style as Ray Manzarek later did with The Doors. His work is still viewed as some of the best works in Rock Music.

The Seeds' first single, "Can't Seem to Make You Mine", was a regional hit in Southern California in 1965. The song was heard frequently on AM rock stations in northern California (and probably elsewhere), where it was well-received by Rock fans, and eventually went on to become, and is considered today, a 60s cult classic song. The band had a national Top 40 hit, "Pushin' Too Hard", in 1966 and performed the song on national TV. Three subsequent singles, "Mr. Farmer" (also 1966), a re-release of "Can't Seem To Make You Mine" (1967), and "A Thousand Shadows" (1967) achieved more modest success, although all were most popular in southern California. Musically uncomplicated with a knack for simple melodic hooks and dominated by Saxon's unorthodox vocal delivery, their first two albums, “The Seeds AWeb of Sound,” are today considered classics of 1960s garage music. 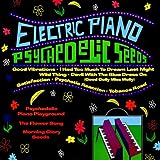 are another band that I loved in 1965, The Electric Prunes, are, and always be, an American psychedelic rock band, formed in Los Angeles, California, in 1965. Much of the Prune's music was, as music historian Richie Unterberged viewed it, possessed of "an eerie and sometimes anguished ambiance", and mainly composed of material by songwriters Annette Tucker and Nancie Mantz, though the band also wrote their own songs incorporating psychdelia and signs of embryonic electronic rock, the band's sound was marked by innovative recording techniques with fuzz-toned guitars and oscillating sound effects. Whew! In addition, guitarist Ken Williams' and singer James Lowe's concept of "free-form garage music" provided the band with a richer sonic palette and exploratory lyrical disciplined-base than many of their contemporaries. One would be safe in saying that The Electric Prunes, and I hate to reuse this, were ahead of their time.

The band signed with Reprise Records in 1966 and released their first single, "Ain't It Hard", in the latter part of the year. Their first album, The Electric Prunes, included the band's two nationally charting songs, "I Had Too Much to Dream (Last Night)" and "Get Me to the World on Time". With the appearance of their second album, Underground, the band was more free to create their own songs. However, the original band disbanded by 1968 when they proved unable to record the innovative and complex arrangements by David Axelrod on the albums Mass in F Minor and Release of an Oath. Both albums were released under the band's name, the rights to which were owned by their record producer David Hassinger, but were largely played by other musicians.Several of the original band members reconvened in 1999 and began recording again.The band still performs occasionally, although the only remaining original member is lead singer James Lowe. 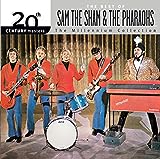 20th Century Masters: The Millennium Collection: Best Of Sam The Sham & The Pharaohs
If you had a transistor radio and were tuned to most Rock FM stations, then you had to hear Sam The Sham and The Pharaohs. This band was loud, high-energy music married to comical-but-realistic lyrics. If you were NOT a Sam The Sham fan, then this LP is a must for your Rock collection.
Buy Now

Best Known For Their

reagae style, I played this 1965 monster hit, "Wooly Bully," to death, which helped introduce Tex-Mex rhythms to mainstream rock & roll, Sam the Sham & the Pharaohs formed in Dallas by lead singer Domingo Samudio, who took the name Sam the Sham from a joke about his inability as a vocalist. The Pharaohsconsisted of guitarist Ray Stinnet, bassist David Martin, saxophonist Butch Gibson, and drummer Jerry Patterson. Before hitting it big with "Wooly Bully," a song about Samudio's cat, they recorded the independent single "Haunted House," which helped the band get a deal with MGM. Following "Wooly Bully," the group recorded a series of largely novelty singles, but only "Li'l Red Riding Hood" shadowed the success of its predecessor. Frustrated at being perceived as a talentless novelty act, Samudio broke up the Pharaohs in 1967 and recorded as the Sam the Sham Revue, and adopted the name Sam Domingo in 1970. His lone solo LP, Sam, Hard & Heavy, featured slide guitarist Duane Allman, but failed to establish him as a major talent. Samudio contributed two songs to the 1982 film The Border and later moved to Memphis and became a street preacher. "Wooly Bully," of course, remains a bar band staple. Meanwhile Sam Domingo is doing quite well helping those in many walks of life who are homeless, but not by choice, the hungry, who cannot afford food and others in these situations.