When Should You Quit Your Band?

I have been in a number of band situations in my life. Some were good and some were bad. However, many of the bad ones had certain things in common. After realizing what they were, I learned how to be able to tell if I was wasting my time or not. I feel that now I am able to make that determination fairly early on. That's a really good thing too, because it saves a lot of time if you can spot it right away.

Generally, in a band situation, you have to have a certain amount of songs in your set list in order to be able to perform the required amount of time needed to get a paid gig. Since you are a band, that means that everyone in the band must know the material. If there are four members in your band and just one of them does not know his part, it ruins it for the other three. That's really all that it takes.

If you have a member or two within the band not learning the songs on the list, some course of action needs to be taken. They need to be advised that they should stop making excuses and just learn the material. It should only take a few practices to determine if someone is really serious about learning their part. If they aren't, they are just wasting your time and they need to go.

The absolute basic function of any band member is to know the songs. The first thing you make sure of is that you have a list of songs that you all want to do together as a band. After you compile the list, you decide to learn a certain number of songs per week. Let's just say that it's two songs per week. If everyone does his part, you should be learning at least eight songs per month. That is not unreasonable at all. If everyone in the band listens to the same music and likes to play the same type of music, you should already know a few songs enough to be able to put them together quickly anyway.

So how long do you think it should take a newly formed band to have enough material to play their first gig? At a minimum, it usually takes at least a few months of rehearsals. But if you find that after about six months of rehearsals, that you don't even have ten songs together, there is something definitely wrong here.

Are You Getting Enough Quality Band Practice Time?

Practice is everything. If people show up late or not at all, it's a big deal. If there are scheduling problems due to the fact that some people in the band aren't available on the same days or times as the other members then you will probably not be able to get together as often as you need to. That's also a big deal.

Do band members show up with friends who get in the way? If so, that can be a problem. Some try to make a social event out of a practice. In some cases they may try to make a party out of the practice and will even show up with beer. Then when the members of the band get sloppy drunk, they end up not achieving much. Sometimes the invited guests make requests for songs the band has not rehearsed and the band will waste its time playing bits and pieces of songs they haven’t learned yet just to please and audience that shouldn’t even be there at the practice to begin with.

Available for the Kindle 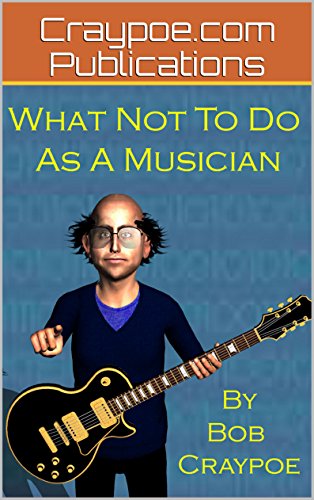 What Not to Do as a Musician
Buy Now

Is the Band Adequately Equipped?

Does everyone in the band have all of the equipment they need in order to play out now? If not, will they have everything they need when it domes time to play out? Your band's music equipment are the tools of your trade. Would you trust a plumber who didn't have any plumbing tools to do work at your house? Really. What would you think of a plumber who showed up at your house who did not have the necessary tools to do the job? Probably the same thing a venue owner might think if you show up at a gig with lousy equipment.

Does Everyone Have a Positive, Professional Attitude?

What is the general attitude of everyone in the band? Is everyone positive? Do you have someone in the band that is always negative? If so, their attitude usually doesn't get any better. Often it gets even worse over time. When you first get together as a band, people try to make a good first impression and then their real attitude will start to show after a while. So if it starts off bad, that’s not a good sign.

Everyone in the band needs to take everything seriously. They also need to be responsible and professional people. Does one of the members not have his license? That means someone has to pick him and his equipment up for practices and gigs. This can be quite an inconvenience and the fact that the person lost his license to begin with may be an indication that he is an irresponsible person anyway.

It's amazing how musicians can often throw common sense out the window when they try to put together a band situation. The same things that would make someone a bad employee on a job would also make someone a bad band member. Think like a business owner or a manager at some company somewhere. Ask yourself if you would hire that person if it were your decision.

If you believe that the person really has no work ethic, what makes you think he will be any better in a band situation? These are questions you really need to ask yourself about each member of the band. If you determine that certain people in the band are a waste of your time and they are an impediment to progress, you need to get rid of them. If the remaining members of the band don't agree with you, then maybe it is you that should leave the band.

Is it Working Out or Not?

Look, either a band situation is working out or it isn't. If it isn’t, then you simply need to ask yourself why. If you determine that it is as a result of one band member ruining it for everyone else, that person is the source of the problem and that person needs to go. The problem will never be resolved for as long as the root cause is still present. To solve any problem, you have to go right to the source and eliminate it. It's really that simple.

However, if you try to resolve the problem and you get resistance from the other members of the band, then the situation is hopeless and there is no point in staying in it. Sure it will be a disappointment to come to that conclusion and to leave as a result, but it's also pointless for you to waste your time. Time is the kind of thing that life is made up of. Don't waste your life with people who waste your time.