H.P. Lovecraft was an American writer of horror, fantasy and science fiction, based upon aesthetic and philosophical principles wich became known as "cosmic horror". He believed that the universe is fundamentally inimical to mankind, and that life is incomprehensible to the human mind. He invented the Cthulhu Mythos and the Necronomicon, a fictional book of magical rites and forbidden lore.

His work had not much succes during his lifetime, but over the decades his reputation became steadily stronger. Together with Edgar Allan Poe he has exerted an incalculable influence on modern day writers of horror, fantasy and science fiction. Stephen King called him "the 20th century's greatest practitioner of the classic horror tale", and stated that Lovecraft wasn't only responsible for his own fascination with the macabre, but also had the greatest influence on his own writing. His fans also include writers such as Neil Gaiman, Jorge Luis Borges, August Derleth, Robert E. Howard, Robert Bloch and Fritz Leiber, and movie directors as John Carpenter and Guillermo Del Toro, or artists as H.R. Giger.

The stories of H.P. Lovecraft have been frequently adapted into plays, movies, comic books and games. He influenced the psychedelic rock band Lovecraft, who released two albums bearing his name, the metal band Metallica (The Call of Cthulhu, The Shadow over Innsmouth,...), Black Sabbath (Behind the Wall of Sleep), Iron Maiden and others. Lovecraft's had also a heavy influence on games, such as the role-playing game Call of Cthulhu, the board game Arkham Horror, the card game Mythos and several video games, including Call of Cthulhu.

Here are some fine "audio drama" or "audio theater" productions, based upon his work.

... was created by Patrick Bernauw, aka The Lost Dutchman, based upon the H.P. Lovecraft story The Tomb, and with a gothic & dark ambient musical soundtrack of Fernand Bernauw, a "horror ambience" by klankbeeld and the soundscape "tangible darkness" by keplar.

A production of the Electronic Voice Phenomenon:

SHE: If you're a man, you better admit it.

SHE: You always have been a dreamer, and a visionary.

HE: Always seeing and hearing things, that were not there.

SHE: Maybe, in the twilight deeps of a wooded hollow, you spent all the time you got - reading, thinking, dreaming.

The Call of Cthulhu 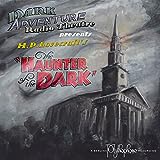 At the Mountains of Madness

The Shadow out of Time

Dark Adventure Radio Theatre : classic "Weird Tales" by Howard Phillips Lovecraft, as they might have been on the radio during his lifetime, each show being a faithful adaptation of one of his stories, performed by professional actors, with great sound effects and original music.

At the Mountains of Madness. Scientists from Miskatonic University set out on an expedition to the Antarctic continent. Its survivors uncover true cosmic horrors... Lovecraft considered this as one of his best and most ambitious stories. It was first published in Astounding Stories magazine. This 77 minutes old-time radio adaptation features a thrilling original musical score by Troy Sterling Nies.

The Dunwich Horror. A rurar family's black magic unleashes an otherworldly threat to mankind... Only the scholars of Miskatonic University can beat these occult monstrosities! Inspired by rural Massachusetts and its folklore, featuring Yog-Sothoth, a passage from the Necronomicon and a cast of more than a dozen professional actors in 75 minutes Lovecraftian suspense.

The Shadow out of Time. After suffering for five years from a strange case of amnesia, a university professor launches an investigation and discovers the horrifying reality behind his affliction... This story is considered by many of his fans as one of Lovecraft's highest achievements in weird fiction.

The Shadow over Innsmouth. A young man's travels in search of antiquarian architecture and his own family history brings him to the ill-regarded Massachusetts town of Innsmouth... and to uncover horrors beyond his wildest imagination. One of Lovecraft's most popular tales, written in 1931 after visiting Newburyport.

The Call of Cthulhu. A young artist has dreams of a Cyclopean city from beneath the waves... and unlocks the hidden horrors of depraved cultists in the swamps of Louisiana, and the cosmic evil of a hideous otherworldly idol. This is Lovecraft's most famous and influential tale, that inspired the classic role-playing game and a 1920's film version of the HPL Historical Society. This classic radio adaptation offers a new dimension to the classic story.

The Shadow over Innsmouth