Some pointers on deciding which beginner electric guitar to go for

This may seem like a tough decision to make, but for the most part, as long as you stay within the realm of popular brand names, it's difficult to make too much of a mistake.

A little further down I'll get into a small list of electric guitars I know are fairly decent, and if I don't know for sure, I'll tell you.

For those who know enough about electric guitars, please excuse me while I write for the complete novice.

The first thing I like to take into consideration is what kind of music you intend playing eventually.

Someone wanting to play rock guitar, for instance, would be happier with a guitar that has a more pronounced mid range tone than say, someone interested in playing country music.

In country music you would be looking for something with a lot more treble, or twang, as some people might refer to it.

Heavy metal electric guitars would be a different breed altogether, as most heavy metal guitarists seem to like tons of gain, which requires quite a high output guitar.

Back in the 1950s, solid body electric guitars began to dominate the music scene. The two most well known makes and models being the Gibson Les Paul and the Fender Stratocaster.

You could say that these two guitars represent the opposite ends of the electric guitar sound spectrum.

Your classic Gibson Les Paul sound could be summarized as a classic rock guitar sound, whereas the Fender Stratocaster sound is more of a southern blues rock sound.

Just to make things as clear as mud again, these are broad generalities, and often guitarists with a good ear for guitar tone will be able to adapt any guitar to suit their particular style of playing and genre.

The best way to explain it is look at examples of bands and guitarists that use them.

Bands or guitarists that use a Gibson Les Paul.

Gary Moore has been known to play a wide variety of guitars over the years, but most of his guitar work will give you a good idea of what a Les Paul should sound like.

Anyway, i think you get the picture. The Les Paul sound is a rich and thick rock guitar sound.

Perhaps the best way to understand a Les Paul sound is to give you some classic examples of what a Fender Stratocaster sounds like, so you can hear what a Gibson Les Paul is not.

Some classic examples of a Fender stratocaster sound.

Mark Knopfler of Dire Straits can be heard playing a Fender Strat on their first hit single "Sultans of swing". In fact, even the rhythm guitar was done on a Stratocaster.

Jimi Hendrix played a Fender Stratocaster, albeit upside down.

Because of this guitars bolt on neck and easily removable parts, it is probably the most widely copied guitar design, with many cheaper guitar companies making almost exact replicas over the years.

Guitar pickups, and how they affect the sound

The electric guitar pickup is a simple device, consisting of a magnet, or set of magnets, around which an electrical coil is wrapped. When the guitar string vibrates, it disturbs the magnetic field around the magnet, which creates a small electrical signal in the surrounding copper coil, which is sent out to a guitar amplifier.

These are usually found on Stratocaster style guitars, and if they follow the original design, should have a very bright treble sound. The problem with this pickup design is that it picks up interference from fluorescent lighting, which comes through as mains hum.

There are ways around it, and some people love the sound of vintage single coil pickups so much that they're willing to put up with it or innovate solutions.

As its name implies, this pickup is designed to eliminate mains hum by using two coils wired in series while the magnets polarities are reversed.

This makes a slightly less treble pickup with twice the power output of a single coil, and no hum. This is the main pickup design used on the Gibson Les Paul. It'll drive your guitar amplifier into overdrive a lot sooner, so it's great for rock music.

Does it really matter which beginner electric guitar you start with?

My own personal feeling on the matter is that a good quality guitar, no matter which style of guitar, can only be a good thing, but when it comes to the best long term solution, I do have my preferences.

Beginner electric guitars have come a long way since I first began learning the guitar, so I am only marginally worried about the quality of craftsmanship. I also don't care where it was made. Everything nowadays is done with computerized woodwork machinery.

What does concern me a bit is the quality of the parts used, and the use of cheaper metals on crucial parts of the guitar.

Not all guitar companies will care enough to pay attention to this on beginners guitars. This is one of the reasons I prefer to go with a guitar company that's well known, as they have a reputation to uphold.

You can still expect the parts on a beginner electric guitar to be cheaper. They should still be of reasonable quality though.

Seeing as we've been talking a lot about Gibson and Fender, its par for the course that these are two guitar companies well worth looking at.

Other guitar manufacturers worth considering are Yamaha, Ibanez, Cort, Washburn and Stagg (who make a fairly decent Stratocaster copy).

This isn't to say there aren't others who may make decent beginner guitars, but this is, in my opinion a fairly safe list.

At the time of writing this, I'm visiting my sister in Australia. I decided not to take a guitar with me on the trip, instead I thought I'd just buy the cheapest beginner electric guitar I could find and mess with it till it was playable.

I bought a Squier bullet strat. To say that I'm moderately impressed would be an understatement.

The craftsmanship on the guitar is excellent. Although it has cheaper tuners than a standard stratocaster, after a minor setup it plays well and stays in tune just fine.

The only time it goes out of tune is when the tremelo system is used for anything more than a slight vibrato. It was never designed to do dive bombs.

So, am I saying that you should buy a Squier bullet strat?

If you're on a serious budget, I would say that it's great value for money, but you have to keep in mind that my stay in Australia is only for 2 months. If I was looking for a more permanent guitar there are a few more things to take into consideration.

Nevertheless, compared to the beginner electric guitars of 30 years ago (When I started), as a bottom of the range guitar, this is quite phenomenal.

I need to make a disclaimer here as well: This was the cheapest guitar I could find in the shops I visited in Oz, but that's not to say there aren't cheaper guitars out there that may or may not be as good as, if not better than the Squier bullet strat. I still think it's great value for money though.

Just when you thought it was safe to go back into the guitar shop, Fender has brought out another range of beginner electric guitars, called the Starcaster.

Although not marketed under the Squier brand, their Electric guitar starter packs seem to feature a Squier SP10 practice amp.

I've never actually played one of these guitars, but judging by the quality of the Squier bullet range, I'd say they're probably good.

Update: I've recently been looking around at various reviews of the Starcaster electric guitars, and one thing that comes up quite often is "Sharp fret ends".

I need to tell you that the Squier bullet strat I bought had perfectly smooth fret ends, so that may be an option if you're interested in a Stratocaster style guitar. They're also cheaper than the Starcaster.

Personally though, if I wanted to buy another Fender Squier Stratocaster, I would look at anything from the Affinity series upwards. But then again, I'm not a beginner.

Probably the most popular Gibson electric guitar, is the Les Paul model. This is a guitar designed by Les Paul himself.

The ironic thing is that Les Paul made use of the Epiphone factory in the early days to work on his guitar designs. Epiphone was a separate company from Gibson back then.

One thing that became very obvious when shopping for a low cost but quality guitar, was just how much more expensive a decent Epiphone guitar is.

Their cheapest beginners electric guitar may be well made, but I just can't get my head around the fact that it's too thin, has a bolt on neck, and although it's modeled around a Les Paul shape, it lacks that Les Paul appeal.

The Squier Bullet Strat, on the other hand, Looks like a Fender Stratocaster through and through.

If you're a die hard rocker and you really need to have a Les Paul, I wouldn't go for anything less than the Les Paul 100.

Something I need to mention here is that there are some other options for beginners that fall outside the mainstream choices here: Beginner electric guitars 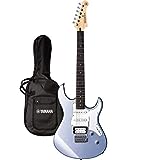 The best of both worlds

What's the ultimate decision for a beginner guitar player?

If this is getting long winded, I'm sorry, but please bear with me as I'd like to show you my personal best choice for a beginner electric guitar.

It's slightly more expensive than my Bullet Strat, but it's great for a wider variety of music style, and it's an industry standard in electric guitars.

The Yamaha Pacifica features a humbucker pickup in the bridge position, where it's most useful, and two single coil pickups in the middle and neck position.

A while back I bought one of these for my fiance's son. When he left for England, he put all his other guitars in storage and took his Pacifica along. It's the guitar he ended up playing most of the time.

The Pacifica comes in a PAC112 and PAC012 version. The 112 is the higher end guitar, and has been used by professional musicians for ages.

The PAC012 came about more recently, and is slightly cheaper. These you'll find in their beginner electric guitar packages. The only real difference I can see is that they've used Agathis wood for the body, as opposed to Alder wood on the PAC112.

No matter which electric guitar you decide to buy, every guitar needs to have a setup before it will play at its best. If you can, have a professional look at it.

In the long run, it's a good idea to learn how to do a setup yourself eventually.

Electric guitars are made out of wood, so not every guitar will be exactly the same. The frets on the fretboard have a tendency to work their way out of the wood slightly as the wood expands and contracts.

For the most playable guitar possible, have a guitar builder or technician level and crown the frets. This makes them all the same height above the fretboard.

For really young beginner guitarists, or people with small hands, you can also check out my other hub page Kids electric guitars