A Guide to Guitar

...there was inspiration! This inspiration, drawn from your favorite song, musician, family or friend, is all it takes for one to pursue the art of playing guitar.

Being a guitarist isn't quite as simple as 1-2-3, but with just a few tips and helpful advice anyone can be directed in the right direction to obtain the gear and materials needed to begin their stringed quest into the world of music. Let us begin by looking at a brief history of the guitar.

Most musicians will tell you the guitar is of Spanish origin. While Spain may have played a very influential role in shaping its modern form, one could argue the instrument's beginnings trace back much farther.
Guitars were traditionally described around the 12th century as long necked, fretted instruments with a flat soundboard and curved sides. This description pertains to many stringed instruments popular at the time all throughout Europe, Asia, and India including the lyre, sitar, and tanbur. From this description we can see the guitar's origin as far back as 3,000 years! Most scholars would agree, though, the guitar in its modern style is of European design.
The word ''guitar'' is descended from the Latin ''cithara'', though it is far different than the Roman instrument of the same name.

Which of the following guitar makers do you prefer? Not shown? Leave a comment and let me know!

The world of music is a large one, and anyone who has experienced it can tell you it is extremely diverse. You have a wide rage of styles to choose from. Guitars are played in many genres such as rock and blues(the definitive instrument), and plays an integral part in many classical pieces. Hip-hop and R&B are no stranger to the instrument either. You may choose a different guitar based upon your taste in music.

Throughout the years since Leo Fender and Orville Gibson pioneered the early electrics, the guitar has adapted to every style players have chosen. Brands such as Ibanez, ESP, Martin, and Yamaha have embraced the instrument by crafting many models.

Acoustic guitars have very rich, natural sounds that rely heavily on the model and the wood from which it is made. The vibration of the strings resonating throughout the many sides of the acoustic provide its signature sound. There are many sizes and varying shapes, but all acoustics have a sound hole from which the beautiful noise escapes.

Tune up your vocabulary!

Before you head down the rockin' road to six(or 7, or 12!) stringed success, I suggest learning some related terms and definitions. By understanding all the words involved, you will have a much easier time understanding teachers, manuscripts, and other guitarists.
Here is a descriptive list of some of the components of a guitar:

Find what you need on Amazon! 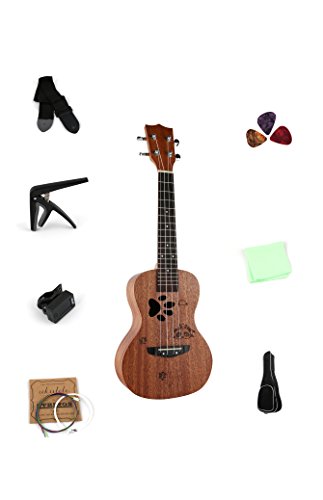 Tools of the Trade

With every great work there were great tools used! To create a masterpiece with a guitar can actually require only the most common of all human tools: hands. The beauty of music in my eyes is humanity's ability to interact body and foreign objects to produce rhythms and harmonies. One can argue that there are many tools within the guitar itself, so let's briefly look at some useful tools used in addition to the completed guitar.

Pics are used to produce a sharper, individual note than the skin of a finger or thumb. They are made of various materials but are most commonly plastic. Picks come in many shapes and are assorted by their thickness. Common sizes range from 0.44mm to 1.5mm.
My favorites are Jim Dunlop Nylon, 0.60mm - 0.73mm.

Though an integral part of the guitar itself, choosing the right string is essential. Different guitars require different strings which can vary in width for distinct tones. Nylon strings have a warm tone, whereas steel-wound electric guitar strings can be very bright. Strings are wrapped, or wound, with a variety of metals: steel, nickel, copper, bronze. Strings vary in thickness for desired sound. D'Addario, Ernie Ball, and Dean Markley are among the many brands to choose from.

Rock and Roll would not fill entire stadiums if it weren't for the amplifier. This device, commonly called an amp, takes the signal from a guitar's pickups and greatly increases the volume. An amp is usually combined with a mixer to adjust the sound and speakers to transfer those vibrations to the air. There are about as many brands of amps as there are electric guitar makers, so choose your tool wisely! Marshall and Line 6 have wonderful products, as well as Crate, Fender, and Ibanez.

While non-essential, the strap holsters a guitar to it's player, providing both comfort and freedom to stand, walk, or even jump around while playing! I believe they deserve an honorable mention.

Now that you understand what a guitar is and how it works, the next step is getting your fingers on those strings! While a seasoned player can pluck and tap away at a guitar at seemingly no effort, he too once had to learn the basics. The basics of playing guitar should be seen as the fundamental architecture on which to build your skills. No one masters the instrument overnight, and many hours of work are needed for a new guitarist to master those fundamentals.
I suggest begin your education by learning to tune the guitar. The tuning keys, located on the headstock, allow you to to adjust the tension which produces different pitches. The common tuning for a six-string guitar is, from top to bottom: E A D G B E. Other arrangements can be made to suit a style or key.
Once you understand how to tune the guitar you can then begin playing. Placing your finger between the frets on the neck allow you to pluck the string to produce an individual note. You can move up and down the neck to change the notes. Strumming multiple notes is called playing a chord. Chords can be very tricky until you develop stronger hands and muscle memory, but do not give up! It takes many hours of dedication and patience to master even one particular chord(F chord on acoustic was a tear-jerker for me) but do not give up! You WILL get stronger, and faster!

After weeks and months of studying the notes and learning your chords, you should then begin to learn the music you love, if you haven't found a melody or two already!
This pertains to our next segment:

You can't master the art without training. Patience and dedication are critical, as well as the spirit and inspiration which led to your love of music. One week off takes two weeks to catch up so be consistent with your practice. Letting your fingers heal is needed, but remember that your callouses will go away faster than you think. You have to train not only your mind, but your body to remember that you are now a guitarist!

Which of the following styles do you enjoy most?

I hope you have enjoyed my Newbie's Guide to Guitar. I compiled this brief introduction because I want to share the basic understanding of my favorite instrument in the hopes that someone finds it entertaining, useful, and inspirational! You only get to experience life by living it. Experiencing music through a guitar is such an integral part to my existence it broadly opened my mind to great understanding of not only music itself, but the sciences of physics and acoustics, electronics, mathematics, woodworking, and history. Your music is the soundtrack of your life.
What's your soundtrack going to sound like?

For further guidance I suggest the following websites for instruments, materials, and videos:

TabCrawler - A website dedicated to guitar tablature. For those of us that can't read sheet music! :P

Youtube - Everyone knows what it is, but not everyone understands how valuable Youtube can be to a guitarist. I did not have this resource as a child learning to play so thank you, internet!