"This time next year, we could be millionaires."

This was the line spoken on many occasions by Del Boy Trotter, owner of Trotter's Independent Trading Company - but basically an old-style market-trader hawking wares from the back of his Reliant Robin on the market or on the street corners of Peckham, London.

Del-Boy is a loveable rogue - in a flat cap and a sheepskin coat most of the time; broad cockney with a smile and a cigar in his hand. His sovereign rings and gold necklaces complete his fashion ensemble.

His brother, Rodney is a tall gangly blonde guy with a long face and a frown. He wants to be having lots of girlfriends like his friends and maybe a 'real' job; instead he is Del-Boy's partner - he takes the stuff out of the back of the van and puts it back in.

They live in a black of flats in Peckham, London called Nelson Mandela House (London went through a bit of a phase with this sort of naming of public housing) with their grandfather (at first) then their Uncle Albert, a Second World War veteran.

Del-Boy is played to perfection by David Jason.

He is ably assisted by Nicholas Lyndhurst as his brother, Rodney.

Comic timing is Jason's stock in trade, and he was in good company with Lyndhurst as his foil and the scenes with Lennard Pearce as Grandad and Buster Merryfield are very funny.

Del-Boy often refers to Rodney as 'a soppy tart' and is given to speaking in French words completely out of context.

Only Fools and Horses Supporting Cast

John Sullivan kept the same cast for the entire time.

Sadly, Lennard Pearce died so the character of Grandad came to an end. He was replaced by Buster Merryfield as Uncle Albert so that there were still 3 people sharing the flat at Nelson Mandela House.

I wonder if John Sullivan knew that he had a winning formula and didn't want to mess with it.

He could easily have just had Grandad die and not fill his boots with anyone else but he knew that that family dynamic was important to this show.

The viewers got the fact that Del-Boy looked after his remaining family, getting rid of that older relative would have taken something away from Del-Boy's character so John Sullivan replaced the old man with another one. 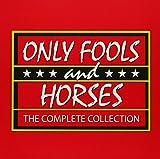 Only Fools And Horses - Highlight Episodes

A quick skip over to You Tube will tell you that Only Fools and Horses was and still is very popular.

There is no change in formula between the first series and the last. Up to the last, he is trying to get rich and usually involved in one hair-brained scheme or another - amongst these are:

Only Fools and Horses - Del-Boy In Love

Only Fools and Horses does not have many female characters at all. The occasional girlfriend appeared from time to time but in general, it was Del Boy and Rodney down at the Nag's Head with Trigger, Boycie, Denzil and Mike - all boys together.

I wonder if it was public pressure which made John Sullivan give Del Boy some love interest?

Del Boy was such a popular character that the general public wanted him to finally get lucky and meet someone.

He did meet somebody in a Christmas Special called 'Dates', shown in December 1988. By then, Only Fools and Horses had already been on air 7 years. Del Boy had been involved with an occasional lady but they were few and far between.

He met Racquel through a dating agency and met her outside of a train station; it was all very romantic and we were hooked to the show, hoping upon hope that Del Boy had met the girl of his dreams at last.

Sadly, Del Boy discovers at a stag night that Racquel, who described herself as an actress was also a stripper - poor Del Boy. David Jason's face when she comes to the stag party dressed as a police-woman and begins to strip - heartbreaking.

But in the next series, Del is reunited with Racquel and Rodney finally meets his love, Cassandra.

After the men meet women the show kept to its core plotlines - Del and Rodney trying to get rich but we had a new domestic angle with both men headed for marriage and eventually, for Del Boy, fatherhood.

John Sullivan stayed true to Only Fools and Horses core characters and purpose but imbued the show with so much comedy that you didn't get to sit for longer than a few moments before laughing at something or other.

Only Fools and Horses uses props and staging really well to create laughs; the flat at Nelson Mandela House is straight out of the 1970s in décor and furniture and as an audience, we love that kind of familiarity.

Only Fools and Horses - Del Boy Gets Rich

We had to wait a long time for it but eventually, it happened! Del Boy and Rodney finally get rich in a Christmas Special in 2003 when they find an old watch in Racquel's parents garage when they are clearing junk out to sell on in the market.

Del Boy has everything his heart desires - money, love, a child, the home and car of his dreams.

I imagine people all over the U.K. were cheering in their living rooms when he finally got rich.

We had shared highs and many lows with this man for the last 22 years and throughout that time. we had all been rooting for him. He was a good bloke - the kind of man who deserved to get something out of life and finally he had it!

Unfortunately, it was not to last. John Sullivan bowed to pressure from people wanting more and when you're that high up there's only one direction to travel - down, down, down!

So it was nice while it lasted - Del Boy and Rodney as multi-millionaires, even for a little while but in the end they were back at Nelson Mandela House on the bones of their arses!

Sadly, John Sullivan, the creator of Only Fools and Horses died in April 2011.

Only Fools and Horses is the comedy show for which he is best known but he also made a few other really good ones.

He also co-wrote the excellent Micawber and Heartburn Hotel.

For most Brits though, we will remember him for Only Fools and Horses. John was a Londoner with a love for his city and its people. His comedy shows were all set in London and Cockneys were the main characters. He stayed true to the people he knew, basing some of his characters on friends and relatives - he found comedy all around him and he was a very funny writer.

I have listened to the scripts of Only Fools and Horses without moving pictures, just the words and it is still funny.

For me, this has become a sort of acid test for whether comedy works or not.

John Sullivan passed that test in every comedy he ever wrote. He will be sadly missed.