Betty White Back on TV

Betty White Back on TV

If you read my previous story on Betty White – “Betty White Everything Old is New Again” – then you know what a tremendous surprise hit she was as a guest host on a recent “Saturday Night Live” television appearance. Betty is now in demand again on TV after a continuous 61-year show biz career.

Her new comedy series, “Hot in Cleveland,”   begins June 16, 2010. This new show revolves around three fabulous-looking women of a certain age who are best friends. The actresses are Valerie Bertinelli, Jane Leeves and Wendy Malick. In the first episode the three friends are on a plane headed for Paris from Los Angeles for a ladies-only vacation celebration. There is a ferocious storm and the plane is forced to land unexpectedly in Cleveland. That’s right. That’s not a typo. Not Chicago. Not New York. Not Hawaii. But Cleveland, Ohio.

The three very attractive women soon learn they have found the “promised land.” They begin to love the city and find themselves living under one roof (remember the Golden Girls all living together under one roof in Florida?) Obviously a tried and true premise. Where does Betty enter the picture? She is the sassy, always-has-the-best-lines caretaker who has been minding the property they have rented for more than fifty years. Sounds like a combination of Bea Arthur and Estelle Getty from “GG” doesn’t it?

Ten episodes have been purchased for the first season. The writer is Emmy Award winner, Suzanne Martin (of Frasier and Ellen), and the producer is someone you will also know – Sean Hayes (of Will and Grace). 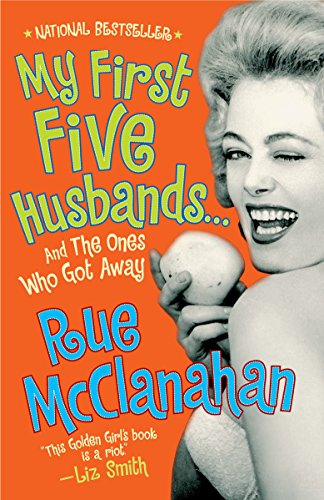 My First Five Husbands...And the Ones Who Got Away: A Memoir
Buy Now

For all the “Golden Girls” fans there is sad news to relate. Rue McClanahan who played sex-starved Blanche on the show has passed away. Betty said, ”Rue was a close friend and a dear friend and her death hurts more than I ever thought it would.”

In November, Rue McClanahan, 76, underwent bypass surgery only to suffer a stroke a week later. "But Rue's a fighter," her manager said. "She was getting better and never lost any of her mental awareness whatsoever … She was a breast cancer survivor and gave speeches, and I said, 'Well, now you will also be able to give speeches about surviving a stroke!' "

Early this month Rue was lunching with a friend when she seemed a little weary. Waving it off as fatigue, the actress went to lie down but soon told an aide that something didn't feel quite right. Not long after, she lapsed into a coma and passed away from a massive stroke on June 3, 2010. R,I.P., Rue.

"She was a very, very gracious, warm, compassionate lady, and she died with the dignity that she lived," her manager said. "Anything else wouldn't have been fair for her. Not for somebody like her who was so vital and always wanted to give."

Season 3, episode 23: ''Mixed Blessing''
Dorothy's son surprises her with news of his engagement to a middle-aged black woman

Rose: The same thing happened to the Bigbotters back in St. Olaf. You see, Gretchen had this thing for Buddy, but Mr. Bigbotter didn't approve — he did his best to keep them apart. But, one day he came home, early, and found Gretchen and Buddy in... how will I say it... a most indelicate situation.
Dorothy: What did he do?
Rose: Well he yelled at them to stop, but they wouldn't so he turned the hose on them!
Blanche: He turned the hose on them?!
Rose: Well they were in the front yard!
Dorothy: Wait, wait, wait a minute, Rose. Buddy and Gretchen weren't people, were they?
Rose: Of course not; they were dogs! Gretchen was a Dalmation and Buddy was a Schnauzer. And Mr. Bigbotter wasn't too happy when he ended up with a litter of Schnalmations!

Rose: The hardest part for me was explaining to my Kirstin the difference between boys and girls. I knew the time had come but I kept putting it off. Finally I decided it was time to take the bull by the horns.
Blanche: So you told her?
Rose: No! I took the bull by the horns, turned him around, and showed her what makes a bull a bull.
Blanche: You are kidding, Rose?
Rose: No! That's how my mother taught me.
Blanche: Honey, didn't that give you a false impression about... what a man would look like?
Rose: It sure did! Can you imagine my surprise on my wedding night with Charlie? Boy, that bull would have been jealous!