The two most recent releases from prolific guitarist Bill Frisell offer an interesting opportunity to compare and contrast a couple of his many collaborative efforts. The first is a studio record, Lagrimas Mexicanas, that pairs Frisell with Brazilian singer-songwriter Vinicius Cantuaria. The two have played on each others projects in the past, but this is the first record where they share equal billing. The second is the fourteenth release from the Live Download series sponsored by Frisell’s record label, Songline/Tone Field. Live in Chapel Hill, 03/22/09 is also a duo record. This time Greg Leisz joins Frisell. Leisz is primarily a steel guitarist, lap more than pedal, and has been in several of Frisell’s many bands over the years.

Given the chance, Lagrimas Mexicanas could easily slip by you. A first impression might be that it is very pleasant and melodic, almost soothing at times, without a lot of depth. Though there is variety on the record, it is not dramatic. Closer listening is more rewarding. Guitars are layered along with some soft percussion tracks and Cantuaria, singing in Portugese for most of the record, has a soft romantic voice that is typical of the bossa nova since the era of Joao Gilberto. 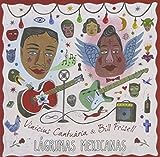 The opening track, “Mi Declaracion” is a good representation of the record. It starts in a typical Frisellian fashion, with three contrasting guitar parts over a percussive background, yet remaining open and spacious. After about 45 seconds Cantuaria’s guitar and voice slide into place shifting the sound into a Brazilian feel, yet the underpinnings of Frisell remain in place, so the overall sound becomes more exotic.

Most of the record maintains this moderate to slow pace with subtle rhythms, gentle grooves and Cantuaria’s soft vocals. The multi-tracked approach is similar at times to Floratone, Frisell’s 2007 album that was a collage of studio tracks with additional overdubs by other musicians. Frisell plays several guitars on Lagrimas Mexicanas and Cantuaria plays both guitar and percussion. There are three instrumental tracks that fit right in with the overall feel of the record. “Cafezinho” is almost a throwaway track, 97 seconds that could pass for Latin lounge music. “Briga de Namorados” is the most interesting instrumental. It starts as a sibling to all the other tracks and then abruptly shifts to Frisell, the gentle mad scientist, playing electric guitar with reverb over filtered and altered background electronics and atmospheric percussion.

The title track is the most uptempo on the record, percussive and syncopated, a definite Latin character with a few added Frisell electronics and a circle of fifths in the chord changes. The record ends with “Forinfas”, the only song sung in English. It is solo guitar and voice, with a vaudeville character to the singing. Something you could imagine Paul McCartney singing as one of his off the cuff songs that seems only half serious, yet is a tribute to an era of well crafted melodies and composition.

Live in Chapel Hill, 03/22/09 also pairs Frisell with another guitarist. This time it’s an all instrumental set with Greg Leisz, who has played frequently with Frisell since appearing on Good Dog, Happy Man in 1999. As one would expect from a live set, it is much freer than Lagrimas Mexicanas. Playing with Cantuaria, one senses that Frisell is carefully crafting his approach to support and enhance the singer. Frisell and Leisz play as one mind, each an extension of the other.

The set opens with “Keep Your Eyes Open”, with Frisell and Leisz effortlessly and seamlessly shifting back and forth from supporting to lead roles, an approach that continues throughout the record. The tune segues into a three minute spacey improvisation with trademark Frisell loops and guitar punctuations, and then continues into an extended version of “Monroe.” The players often double on the melody with Frisell adding infills.

“Throughout” is the longest cut at 13 minutes. It is slow and quiet with Leisz featured prominently. It becomes ethereal toward the end with layers of sustain, feedback and distortion before Frisell starts the opening riff of “Poem of Eva.” “Cluck Old Hen” is all country twang with Frisell and Leisz trading riffs throughout.

“I’m So Lonesome I Could Cry” is mournful and melodic. It moves into ballad-style treatment of “Surfer Girl”, the Brian Wilson composition. “Baba Drame”, based around an African flavored riff, rocks out more than the other tunes with Frisell adding fuzz and distortion. “Benny’s Bugle” the old Benny Goodman tune, is the jazziest and most uptempo track. A relatively brief version of “Lovesick Blues” closes out the set.

While perhaps not an essential Bill Frisell recording, the Chapel Hill show was certainly a good choice to add to the Download Series. Fans of Frisell and Leisz will enjoy the subtle interplay as the two musicians gently push each other into extended explorations of familiar selections from the Frisell catalog.