Bob Dylan has been dubbed America's poet laureate. (See the below linked article). Bob Dylan is a most prolific song writer whose contribution to the 60's folk revival was invaluable. Bob Dylan wrote so many songs, most of them protest songs of one sort or another, that it would be impossible to remember them all. He does sing them with great passion as well, although admittedly his voice leaves something to be desired. Yet, listening to him sing, one is so carried away by the pure passion and intensity of his performance that his voice quality becomes of minor import. I suppose, that's what makes me classify him more as a poet--and I agree that he should be dubbed poet laureate--than a musician, even though many of his songs did have wonderful melodies. Yet it was the lyrics that went with the melodies that helped influence his generation.

But my main purpose in making this page is to show that Bob Dylan was both a knowing and an unknowing instrument of God. More on this further on.

If you haven't heard him, take a listen and see what you think:

The start of Bob Dylan:

(info. gleaned from Wikipedia and the Bob Dylan bio site:)

Either in late 1960 or early 1961(sources disagree as to the exact date), Robert Allen Zimmerman came to New York in to visit his song-writing idol, Woody Guthrey who was sick in the hospital.

While there, he also frequented coffee houses and folk clubs of Greenwich village and began cranking out songs at an amazing rate. The following year he changed his name to Bob Dylan and signed a record contract. The rest, as they say, is history.

The Wikipedia article on Bob Dylan, from which I gleaned the above facts, gives the basic facts about his life, but his own bio page (linked below) gives a more detailed look at his life and career. After checking these sources, you may want to read about his induction into the Rock & Roll hall fame (also linked below).. Finally, do read about his spiritual journey as prelude to my thoughts on him being an instrument of God. Just follow the links below:

Bob Dylan: an instrument of God?

Bob Dylan wrote mostly protest songs about war, poverty, injustice and social wrongs. although he did write some songs that are simply love songs of some sort or other also, although most of them are somewhat esoteric as well. A lot of Bob Dylan's songs are esoteric--that is, you can't really understand their full meaning at first, and some of them you never will really figure out the entire meaning. Bob Dylan will tell you himself that he doesn't even know the full meaning of some of some of his songs. That's what makes them so interesting--which brings me to my next point:

Actually, the main reason I'm making this page about Bob Dylan is to point out something most people, Christian and otherwise, are unaware of, namely the influence of God upon his writing--that he was an instrument of God--even before his conversion to Christianity reference below.

Of course the fact that he read the Bible probably helped. (He even advised Noel Paul Stookey of Peter Paul & Mary to read it.) One reviewer mentions "echoes of the book of Isaiah in 'All Along the Watchtower,' a song that seemed eerily similar to Mark 13:35." My favorite Bob Dylan song, "Hard Rain's Gonna Fall" seems to pre-figure "Slow Train Comin'" from his Christian era, using a different metaphor for the coming judgement of God.. One person in Martin Scorscse's documentary of Dylan, "No Direction Home," went so far as to say that when Dylan was writing, you could see the Holy Spirit in him.

There are songs written before his Christian era that seem to speak metaphorically of the return of Christ and the coming judgement of God.. For examples, see the 5 best songs section below. (See also Tangled up in the Bible" listed after my song list.) Thus, I conclude, that even before he knew God, God was using Bob Dylan as an instrument, (unbeknown to him) and his conversion and Christian era were the climax of his career to which everything prior in his life had been pointing. .

In 1978, Dylan did openly embrace Christianity, having found Christ through the Vineyard Christian Fellowship Church. Late that year, he starting writing songs with a Christian message, although many of these also spoke, as before of social wrongs, but, now he views these wrongs from a Christian perspective both of the present and the future. "Slow Train Coming'" is a good example. He made 4 Christian albums, but "Slow Train Coming" was the best known and he included several songs that were right to the point, like "Y' Gotta Serve Somebody" and "When He Returns." (See 3rd (last) link in the link list above "Bob Dylan: Dylan's Journey" as well as the the Amazon Spotlight: "Inside BOB DYLAN'S JESUS YEARS.." below.)

Bob Dylan's "Jesus Years" are today regarded by many, including myself as among the best of his career. Here is an insiders view into Bob Dylan's "Born Again" transformation, and its effect on his life and music. .In his first-ever interview, Dylan's Bible class teacher, Pastor Bill Dwyer, details Bob Dylan's embrace of Jesus Christ and Christianity. Director/Producer Joel Gilbert weaves the story of Bob Dylan's Jesus Years through revealing insider interviews. Included are rare photos and exclusive live concert footage from 1978-1981, while Bob Dylan himself explains the impact of Jesus on his life and art in a recently unearthed interview from 1981

Check out this Christianity Today article. They come at it from a slightly different angle that I did in the callout box above, After reading it, please vote in the poll module as to whether or not you agree with me that Bob Dylan was an unknowing instrument of God in his pre-Christian years.

Bob Dylan's Christian Albums - The Gospel According to Dylan

Bob Dylan made 3 specifically Christian albums, and there area also several tribute albums by various artists and groups available, but his album "Slow Train Comin'" was the best known and, having purchased the album in the past, I can truthfully say that I agree that it should be considered his best. He included several songs that were right to the point, like "Y' Gotta Serve Somebody" and "When He Returns," and they are done with great passion and feeling. . It truly is the perfect combination of social commentary and Christian prophetic evangelism. (One reviewer writes:) "a joy to listen to because it finds Dylan finally at some form of peace" Of course--he finally found the true source of fulfilment: Christ--JMB.The reviewr continues: "He had been singing about some of the elements found in this album for years. Only now, Dylan knew that it was God who gave him the gift to do so. Dylan is more focused and diligent on 'Slow Train Coming' than anything he had ever recorded before," I agree heartily -- JMB 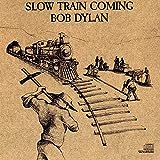 The 5 best songs by Bob Dylan (according to me) -- NOT listed in best to least best order:

These are my picks. You may or may not agree. Certainly the most popular Bob Dylan song ever was the first listed, but definitely his best song of all, as I see it, is the one I listed 3rd.

1)"Blowin" in th' Wind."--I listed this one first because it is perhaps his most famous, made so by Peter Paul & Mary. It's protest pure and simple. If you want another war protest song, I'll throw "Masters of War" in for free. (not one of the five)

2)"Farewell Angelina"--one of his most esoteric songs, but speaking metaphorically of the end of the world as a warning.

3)A Hard Rain's Gonna Fall" (This is actually my favorite: Great words of social protest and a great tune to go with it. And this one seems to me to refer metaphorically to the return of Christ (and the coming judgement of God), even though it's before Dylan's Christian era.

4)"When the ship comes in." Another great song of social protest, but which also speaks metaphorically of the return of Christ (very clearly I think--I can't get away from it). And this one was also written before his Christian era, like "Hard Rain." "When He Returns" in the "Slow Train" album speaks pointedly of the return of Christ, but I feel these two (this one and Hard Rain" were precursors to lead up to that one, even unbeknown to Dylan.

5)"Slow Train Commin"--This one is from his Christian era, but compare it with "Hard Rain's Gonna Fall--the same sort of social protest linked to a metaphor of the return of Christ." Your really should get this whole album. (listed above under "Bob Dylan's Christian Albums").

More about the Bible in Bob Dylan's lyrics:

I'm not the only one to sense the influence of God and the Bible in the lyrics of Bob Dylan The book listed below is the one pictured above in the text capsule. [As Amazon describes it,, It] "explores the ways in which Dylan transforms Biblical images and concepts when he incorporates them into his literary world; it is an attempt to listen to the echoes of scripture in his published works." I couldn't have said it better.

This work takes even my limited ideas of Spirituality in Bob Dylan's songs further. As Amazon further puts it,this book is "a thorough study of Dylan's reading of scriptures.".

Tangled Up in the Bible: Bob Dylan and Scripture
Buy Now

Having read my thesis in the callout box above and the Christianity Today article which follows it and any of the other books listed between there and here, DO YOU AGREE with my thesis, that Bob Dylan, before his Christian era, was an unwitting instrument of God?

Before his Christian era, was Bob Dylan an unwitting instrument of God?