Daisy Mariposa has a B.A. from Montclair University in New Jersey and two occupational certificates from California colleges.

To what does the term "Broadway" refer?

Broadway theaters must have at least 500 seats, and with one exception, be located in the area extending from 42nd to 54th Streets between 6th and 8th Avenues. The theaters are all in the vicinity of Broadway, a street which crosses Times Square.

The exception to being situated in the Times Square area is the Vivian Beaumont Theatre, which is located on 65th Street in the Lincoln Center for the Performing Arts complex.

Theaters which have less than 500 seats are known as off-Broadway theaters—even if they are situated in the Broadway area defined above.

There are many terms and definitions unique to Broadway and the theater-going experience. Gaining an understanding of these terms will enhance your viewing enjoyment when you attend a performance. 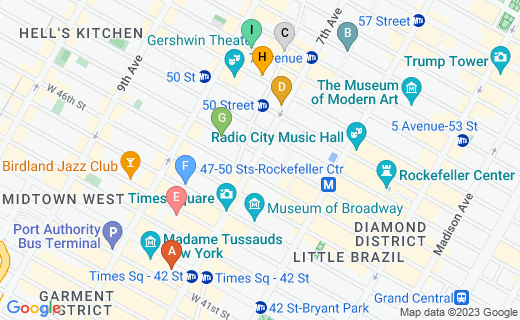 The following 39 theaters are all considered to be Broadway theaters. The Vivian Beaumont Theatre is the only theater not in the Times Square / Broadway area. It's located in the Lincoln Center complex.

The following 25 terms and accompanying definitions are just some of the ones unique to theater-going.

Have you ever attended a performance in a Broadway theatre?

When you attend a theatre performance, on Broadway or elsewhere, do you prefer seeing dramas or musicals?