You can find a lot of information about the music album entitled Saiyuki Reload Sanzo's Song Collection in this hub. This includes the album's track list as well as details about the songs and even some song samples. This hub will also have references to the anime Saiyuki Related because of its relation to the music album in question. 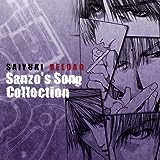 Saiyuki Reload Sanzo's Song Collecti
Ignore the incomplete Amazon title. This is the Saiyuki Reload Sanzo's Song Collection music album. This album features songs sung by Seki Toshihiko, the seiyuu or voice actor of Genjo Sanzo, one of the main characters of the Saiyuki series by Kazuya Minekura. For more information about this music album, look below
Buy Now

If you want more information on Saiyuki Reload, then just look at this. Since the music album is Sanzo's Song Collection, then expect to hear a lot about Sanzo.

If you want some more information about Genjo Sanzo, then just look at this.

This hub will also mention the Saiyuki series in general as well as some of the other characters in said series, so if you want some more information about all of these topics, then you can just look at this.

The music of the Saiyuki series

The Saiyuki series has an extensive music collection, consisting of a multitude of songs sung by different artists and even some instrumental music. All of the music in Saiyuki is definitely wonderful and fantastic. The singers all have excellent voices that just make the songs even better.

The songs have catchy tunes with different tones that may even get you to sing-along even if you don't understand the lot of it. The translated lyrics of the songs are all very meaningful and would really get you to think as you relate it to the series.

Saiyuki, Vol. 1
This is the first volume of the Saiyuki manga where it all began. The cover features Genjo Sanzo, a monk and the leader of the Sanzo-ikkou. Yes, he's a monk that carries around a gun. It's a Smith & Wesson, actually.
Buy Now

And yes, listening to all these songs, you can definitely hear Sanzo's distinct and wonderful voice.

There might not be any words to describe this but, suffice it to say that Sanzo's voice is just plain perfect. It fits him much more than words can say.

The 7 songs from this album are as follows:

This song, sung by Sanzo, only appears in this album. It has a rather fast beat to it and the tone is definitely upbeat, catchy and lively. Sanzo's voice really shines through in this song.

Considering the title and how some part of the lyrics mention voice (koe) and light (hikari), this song seems to be speaking of the time when Sanzo and Goku first met.

Sanzo heard Goku's voice calling him but he found it annoying and so he went in search of Goku to tell him to shut up and stop calling him. He found Goku imprisoned in a cave. He ended up taking Goku with him who gladly took his hand. Goku has always viewed Sanzo as his sun and light.

I'm allowed to break down and shoot out my cowardly hesitation

This song has a solemn and soft tone to it with a serious and light beat.

Sanzo's voice sounds incredible and you can really hear the poignancy of the song as he sings it.

The lyrics sound a bit on the sorrowful side and it's as if Sanzo is thinking about his past.

The translated lyrics attest to that. It really holds a lot of meaning to it, which just makes the song even more beautiful.

Some of words and phrases from the translated lyrics include 'world that continues to turn into corrosion', 'if I rely on powerless gods', and 'I'll want to believe in these two foolish hands'.

This song seems to be talking about Sanzo's dark tragic past. He perceives himself as weak for being unable to protect his mentor and he hates being weak. He doesn't believe in the gods, which you might deem as ironic since he is a monk of the highest order.

Fleeting transient world only seen as the dream called reality

This song, sung by Sanzo, also appears in Gensomaden Saiyuki Vocal Album Volume 3. This song has a bit of a loud tone and fast beat to it.

The translated lyrics hold much meaning to it with words and phrases like 'listening to a cry completely without voice', 'if you search there, will you find only the truth?', and 'people don't change, hoping for the unnatural'.

This song seems to be speaking of Sanzo and how he heard Goku's voice calling him before even meeting him. Sanzo went looking for Goku with the intention of telling him to shut up and stop calling him because his voice was grating on him and annoying him. Of course, he just ended up taking Goku with him anyway.

This song, sung by Sanzo, only appears in this album. There's a different tone to this song but it's still lively and melodious.

As Sanzo is a monk, he does have a chakra. That would be the red dot on his forehead. He is actually one of the highest-ranked monks in Togenkyou (or Togenkyo), which is the world setting of the Siyuki series.

He possesses the Maten Kyomon (evil sutra), which you can see draped over his shoulders when he's in his full monk outfit. He can use this sutra as a weapon to get rid of demons.

That which I am chasing continues to disappear

This song also appears in Saiyuki Reload Vocal Album Volume 1 and it was also sung by Sanzo. Trigger has a bit of a long instrumental before the singing starts but this merely sets the tone of the song, which is light, solemn and serious.

In this song, Sanzo's voice sounds soft but still with that distinct tone that just lets you know right away that it's Sanzo who's singing and there can be no mistake about that.

The translated lyrics hold much meaning with words and phrases like 'day I lost that which was important to me', 'these empty hands', 'plots life and death', and 'to see for myself that I'm not weak'.

This song seems to be about Sanzo blaming himself for Komyou's death. He regrets and hates his inability to save Komyou. He thinks himself weak because of this. Part of the reason that Sanzo is traveling to the west is to retrieve his mentor's stolen sutra (the Seiten Kyomon), which rightfully belongs to him.

This song, sung by Sanzo, also appears in Gensomaden Saiyuki Vocal Album Volume 1. This song has a lively beat to it that isn't too fast but not too slow either.

Many words are sung in English like 'one more game', 'roulette game' and 'good luck'.

There's much meaning to the translated lyrics with words and phrases like 'if you're afraid of losing' and 'if you hold out, you'll win'.

This song seems to be focusing on the theme of games and likening life to a game.

Life can be like a game because sometimes you win, sometimes you lose. And sometimes what you bet is your life. The Saiyuki series has touched up on these themes before.

When smiles that I wanted to protect cried, turned into crimes

This song has a light tone to it that also sounds a bit solemn and serious. It also sounds rather Chinese actually.

But this is in regards to the music and there's nothing wrong with that. The song sounds great especially combined with Sanzo's stunning voice.

The translated lyrics has great meaning with words and phrases like '"limitless strength" I'm wishing for more than anyone'.

The song also seems to be touching on themes about life, among other things.

This also seems to be referring to Sanzo who wishes for strength as he thinks he is weak for being unable to protect his mentor. He has a lot of issues about his past but, in spite of all the darkness and demons that haunt him, he still continues to live and move forward.

Life is going on following that moment in time

What do you think of Saiyuki Reload Sanzo's Song Collection?

Saiyuki Reload Sanzo's Song Collection is definitely a must-have for Saiyuki fans, especially if you're also a Sanzo fan.

Even those who know nothing about Saiyuki will surely like these fabulous and awesome songs sung by the great singer Seki Toshihiko. His voice, Sanzo's voice, is just that good.