Margaret Minnicks has been an online writer for many years. She writes about various topics including celebrities and entertainment.

Taylor Richardson from Jacksonville, Florida launched a GoFundMe page to send 100 people to see Hidden Figures. The 13-year-old aspiring astronaut was inspired to help others see the film after she saw it at the White House when it was hosted by First Lady Michelle Obama on December 15, 2016, before the film was launched in theaters on Christmas Day.

Richardson's initial goal was to raise $2,600, but the seventh grader has raised $14,000 so far, and the funds are still pouring in.

Why did Taylor set up a campaign so young people can see the movie? In her own words, she said, "As a girl of color, it's important that girls not only look at the stars but take the steps to reach for them."

There is now a lack of black women working in the field, and she hopes Hidden Figures can inspire a change. According to her GoFundMe page, "In 2017, we have to work on how to change that." She concludes that she believes seeing this movie will give girls, including herself, the inspiration needed to become a mathematician, an engineer or better yet an astronaut.

It's important that girls not only look at the stars but take the steps to reach for them." --- Taylor Richardson, 13-year-old aspiring astronaut

Taylor Richardson is not the only one who set up a GoFund Me campaign to send people to see Hidden Figures. In fact, campaigns are being set up all over the country by teachers, students, parents, churches, and community organizers.

Octavia Spencer, who plays NASA mathematician Dorothy Vaughn in the movie, paid for a viewing for single parents to take their children. She did this charitable act because she remembers when she was growing up, her mother couldn't afford to take her and her six siblings to the movies. So, the actress bought out an entire showing at the Rave Theater in Baldwin Hills over the Martin Luther King Jr. weekend to honor her mother who died when Octavia was 18.

Hidden Figures is based on the true story of three black women who worked for NASA for Project Mercury that helped astronaut John Glenn become the first person to orbit the earth in 1962. They worked hard and had to overcome barriers.

The women were instrumental in one of the greatest operation in history when John Glenn, played by Glen Powell, went into outer space. Yet these women went unnoticed for their roles in putting the first American in space.

The movie is inspirational for young people to learn about boundaries the black women had to break while working in a white, heterosexual male-dominated world.

Hidden Figures has been at the top at the box office the first two weeks after it was released. So far, the biographical drama film has received positive reviews from critics and has grossed over $64 million in tickets sales in theaters in the United States.

The film will be released in theaters in the United Kingdom on February 17 and is expected to do just as well there. 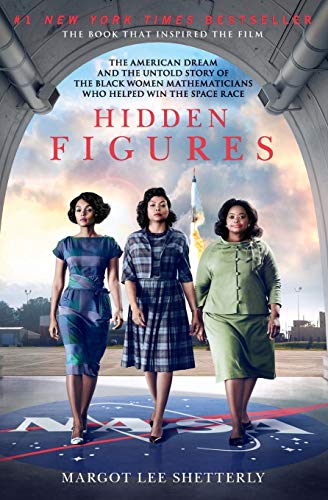 Hidden Figures: The American Dream and the Untold Story of the Black Women Mathematicians Who Helped Win the Space Race
Buy Now