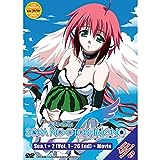 The mother and father are off on holiday or working. This happens in a lot of manga and anime. Leaving a child alone seems to be the theme of hundreds of stories.

Sora No Otoshimono was written by Minazuki Suu.Sakurai Tomoki lives alone for some reason in a small town. He often over sleeps so his neighbor has to wake him up for school. He is faced with the care of a magical girl that falls out the sky.

The magical girl not only interrupts his peaceful life but has nowhere else to go. All sorts of winged woman come into his life. They eat his food, and destroy his quite time. One girl that does not have wings keeps hitting him over the head.

It is never known how he gets all the money for the food in the beginning. I am only guessing that the magical girls make it.

His parents never make an appearance in the entire manga. Lots of fanservice but no sex. Sorry, fans of that type of manga or anime. Also, this one is completed but only adults should watch this one.

DICE: The Cube that Changes Everything

The Parent Does Not Matter

DICE: The cube that changes everything by Yunhyunseok, has the main character living with his mother. It is unknown if she is drunk all the time. However, she only comes home late from wherever she goes. When she gets home, she sleeps.

The difference in this one is that the mom and the son sleep on the floor in a very poor apartment. It is very unclear what is going on with the mother. The main character is clearly not getting feed or sleeping enough. He does not have much to offer, anyone. This could be due to the time he spent healing from all the beatings. It is a wonder he was able to walk to school.

There is also a girl in this one. Eunju wants everyone to be as they are but she is already popular. She might know who they are in her class and say kind words but she never tries to really get to know them outside of class or in class. She thinks everyone can get by on their own talents. This would be great, if the students did not hate: fat, ugly or weak people.

If the main character,Dongtae , did not become a Dicer then he would have been seriously hurt by even talking to that Eunju girl. He should just leave her alone. She is not worth all that trouble.

There are people called Dicers. Dicers are given dice after they complete quests. They roll the dice to help them get more skills. There are more and more people becoming Dicers.There is a person who is behind the scenes that gives the quests. They like chaos but are also want to see the game played out according the roles. (Think Dungeons Master of Dungeons and Dragons)

This one is a Manhwa, not an Anime or Manga.

Moved Out Far Too Young

Skip Beat by Nakamura Yoshiki, has a girl fallowing a guy who she believes will marry her one day. At first, it seems just like she is too young to understand love but even the guy's mother leads her on. His mother uses her as a tool to make her work smoother. Traditionally, the jobs that the girl is give are the jobs that a future wife might do to help out her husband.

She works so much that she lives in an apartment with the guy. When he saves up enough money, he moves out. So, she is left living in the city working to death to keep up the rent. She does not have a high school diploma which was her first love interest's idea, so now she is left with working herself to death.

Her parents are very far away. She does not have a father but her mother is seen in flashbacks to be very strict. Her mother never visits her.

Will the female lead ever get true revenge on her past crush?

Children Are On That Island

Cage of Eden was created by Yamada Keiyou. However, the manga was canceled, so the ending was rushed. Lots of underwear shots in this one.

Akira and his classmates are left to fend for themselves on a mysterious island after what looks like a plane crash. There are many creatures that want to kill them. Although, he does not have much experience on saving anyone, he must save his classmates.

There are mostly large animals that try to kill him. Even thought, he has no idea how to save everyone else, they are counting on him to know the answer. Akira does not have much time to save everyone. The reason being that everyone could get killed by the island and the other people from the flight he was on that have gone insane.

Where is his parent and other adults?

The adults on the island are often useless in survival, but they have a few skills that may be helpful.

What is wrong with this manga?

Horimiya by Hagiwara Daisuke, is about a girl who lives with Hori's parents and brother but the parents are working a lot. She has no time to be a teenager. Miyamura is her love interest that spends time with her.

Everyone thinks that Miyamura is a some pervert who will one day go to jail for looking too closely at little girls. That is no true. He shy because he is hiding piercings and tattoos..

In the beginning, Horimiya does not anyone to know her and miyamura's secrets.