Citizen Kane- Is it the best movie ever? 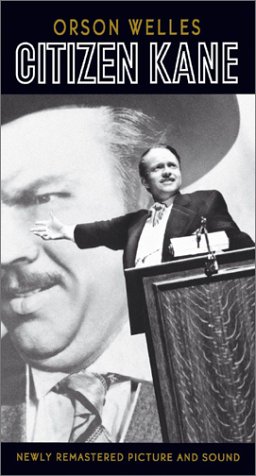 Here is my opinion-

I have seen and enjoyed the Orson Wells Classic, Citizen Kane, as any self respecting movie buff should. The American Film Institute, whom I rarely agree with, ranks this as the best movie ever. Is this a good choice for number 1 of all times?

First, my take on the movie. Orson wells, a great writer, director, and actor, stars as a man who was determined to change his state and country. First, Kane takes over a newspaper and sends it's subscriptions through the roof. Then he marries the U.S. President's niece, and runs for Governor himself. As a formitable man, he hurdles challenge after challenge. The story however, is about someone else's quest. Kane's last word that he uttered before passing away, was "rosebud". A journalist is trying feverishly to find out why, and who she was. This was a definite masterpiece, and worthy of a spot in the top 100.

Is this the best movie ever made? Is it definitely above The Sound of Music, Braveheart, Star Wars, Along the Waterfront, E.T., Scarface, The Godfather, Psycho, High Noon, True Grit, Shaw Shank, Josie Whales, Gone with the Wind, Rocky,The Ten Commandments, Ben Hur, The Passion of the Christ and The Phantom of The Opera? No! Not in my opinion. I could not rank this one above all of the forementioned movies.There are also some outstanding foreign films that rank closely as well. Why? Citizen Kane was not easy to construct, but it was a drama and a character study. The producer didn't need to worry about special effects like The 10 Commandments did, no budget like Rocky did, "Supernatural" challenges like The Passion did, and so on. Even High Noon was harder to make because, not only did the movie last exactly as long as the story took place (very hard to do, and the first movie to pull it off), but the first 4 actors they tried to cast to play Marshall Kane, declined the roll!

To sum up, I liked the movie and will watch it again, but the AFI and I won't agree on this one, or much else (just look at my lists of the best Heroes,Villians, and actors/actresses). Watch Citizen Kane and tell me what you think!

Is Citizen Kane the best movie ever?

What is the best movie ever?