The repertoire for classical guitar literally spans centuries. For a recording to be classified as "can't live without", it must contain works from the best composers, as performed by true masters of the instrument. The recordings listed below come from six of the finest musicians to ever play classical guitar, and provide a good cross-section of what the instrument is capable of.

These recordings form an excellent classical guitar "essentials" collection. For those who want to expand beyond the basic collection, I've listed a number of CDs that I think would be good additions.

This 2-disc collection (over two hours of music), contains Parkening's own favorite recordings from his 25 years at EMI. Selections range from the baroque era to works by 20th century composers such as Debussy and Ravel. Parkening performs several compositions from Johann Sebastian Bach, including Jesu, Joy of Man's Desiring (see video, right), as well as classical pieces from Mozart and François Couperin. Also included are compositions from noted romantic-era composers Fernando Sor, Isaac Albeniz and Enrique Granados. 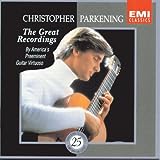 This is a varied, adventurous collection of music. Several of the composers represented, such as Isaac Albeniz, Fernando Sor and Heitor Villa-Lobos, are familiar to followers of classical guitar, but the collection also includes transcriptions of short piano pieces from Norwegian composer Edvard Grieg, as well as selections from 20th century Venezuelan composer Vicente Emilio Sojo, and music from the score for the 1978 film The Deer Hunter.

The CDs listed above constitute an excellent classical guitar collection by any standards. What follows are some suggestions for those wanting to explore the genre further. The guitarists on this list are familiar: Russell, Williams, Parkening and Bream. It's hard to go wrong with performances from these masters.

David Russell is especially good for exploring new musical territory. Russell is known for including compositions and musical styles from outside the standard classical guitar repertoire in his performances, and has released several albums themed around specific styles, eras and/or composers.

After viewing this video, will you seek out more flamenco music?

Flamenco, a very dramatic and passionate form of Spanish music, is a genre that classical guitar aficionados may enjoy. The flamenco guitar is quite similar in tone and construction to the classical guitar, and the best guitarists display a virtuosity equal to that of the classical masters.

The early works of Spanish guitarist Paco de Lucia, recorded before he began combining flamenco with jazz influences, are an excellent introduction to traditional flamenco music. I recommend these CDs:

These are my suggestions for a "must have" classical guitar CD collection. Do you have a favorite guitarist or recording that you think should be on the list? Let me know in the comments section below.