Kip Moore: Up All Night

After the hit country song Somethin' 'Bout A Truck was released early this year, Kip Moore's name has been on everyone's lips and fans have been eagerly following soon-to-be-released songs on YouTube. He released his first album, Up All Night, on Tuesday. While many were expecting an "in your face, upbeat" kind of track, what they got was something entirely of its own - an album filled with love stories, dreamy lyrics and just enough country bad boy to make the album one that everyone will enjoy. So despite Up All Night not quite living up to its expectations, it certainly exceeded them and is on its way to becoming the soundtrack of the summer for country fans everywhere.

One of the things that stands out most about Moore's album is the feeling it stirs up inside you. It takes you back to that place with that special someone, making you want to be there with them again. Songs such as Drive Me Crazy, Beer Money and Crazy One More Time are, for lack of a better term, dreamy and leave girls starry eyed while songs like Hey Pretty Girl will leave you with tears in your eyes. Moore manages to be sweet and romantic while maintaining a tough, masculine image; he perfectly balances sensitivity and strength.

Moore not only creates a love story by portraying love, but does so in the story aspect as well. His skill for telling a clear, well-thought-out story in his lyrics can be understood by even the most musically challenged. One thing that sets him apart from other country music artists is his way of telling a story without it becoming overwhelmed with average, everyday, overly-discriptive images. Nevertheless, the experiences he sings about are more than believable - many of us have probably been in such situations before and felt the feelings that he so perfectly describes. He maintains a romantic, somewhat seductive tone in his imagery. To see what for yourself, check out one of my personal favorite songs from the album, Hey Pretty Girl:

Showing a Rebellious Side

While Moore's love songs stand out, a select few songs on the album sing a different tune. The songs are distinguished by the bad-ass nature that Moore brings to them. This is especially noticeable in another one of my favorite songs on the album, Reckless (Still Growin' Up) which is simply a fun-loving song about being young, rebellious and free. This song lives up more to the "in your face, upbeat" expectations that fans may have had for the album. I think it is easily one of the catchiest songs on the album; you can't help but to sing along. Along with Reckless, Up All Night, Fly Again and Somethin' 'Bout a Truck add the perfect amount of edge to the album. Check out the music video for Somethin' 'Bout a Truck:

For those who want a fun, different and catchy album to sing along to this summer, Up All Night will not disappoint. All country music fans should give it a listen and decide for themselves what they think of Kip Moore's musical talents. Check out previews of all the songs on Moore's album and if you like what you hear, make sure to download Up All Night for your official summer soundtrack. 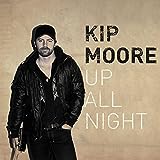 Up All Night
Buy Now